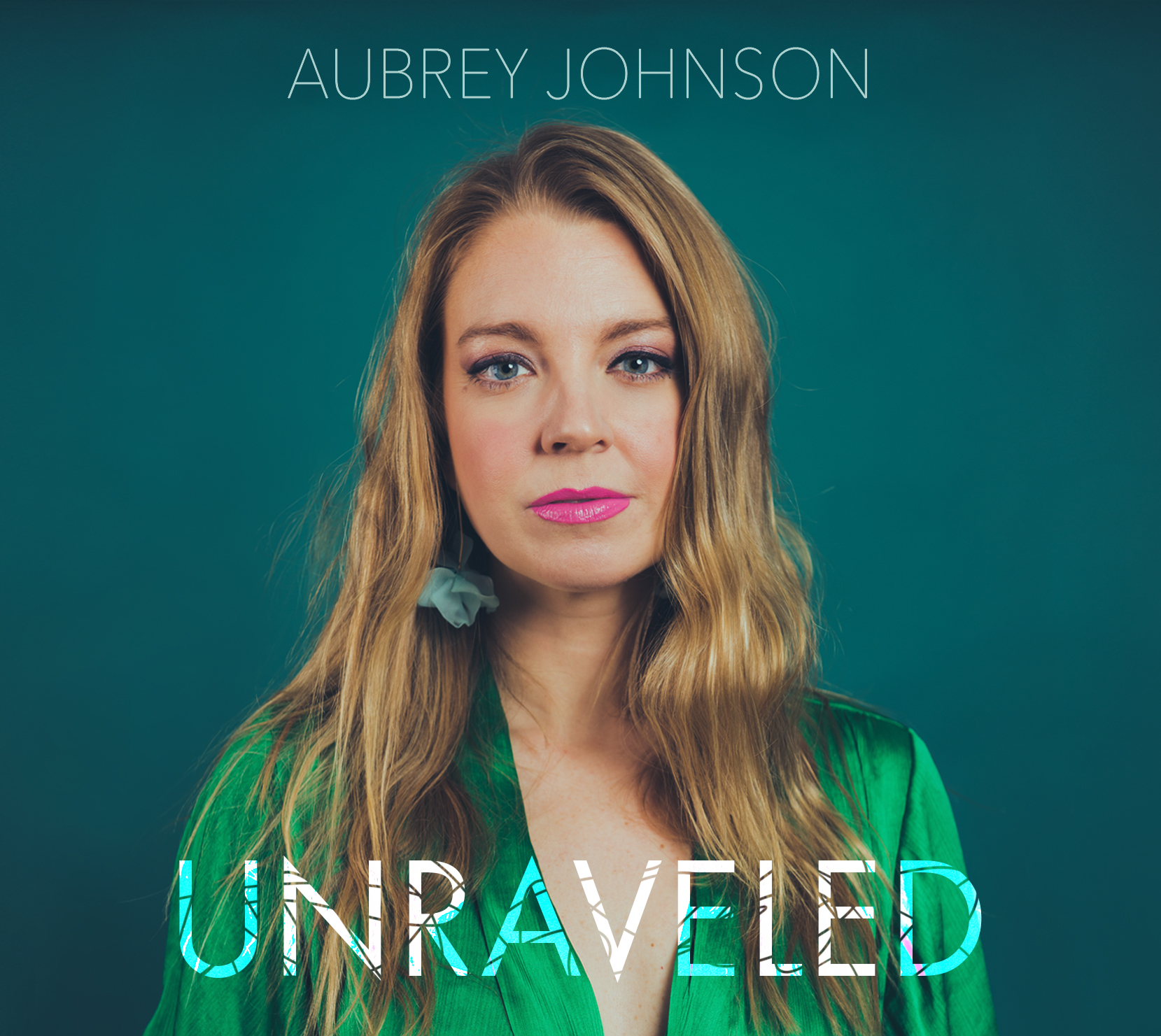 Vocalist, Composer, Improviser and Sonic Adventurer Aubrey Johnson Announces the Release of her Debut Album, Unraveled
Due out March 20, 2020

On Outside In Music

More than a decade into a creatively charged career, Aubrey Johnson is proud to announce the March 20th release of her debut album, Unraveled. Due out on Outside in Music, Unraveled marks this consummate jazz vocalist’s arrival as a composer, arranger, and bandleader with a captivating vision of her own. On this ten-track collection of original compositions along with newly arranged gems, Johnson is joined by a group of stellar musicians who accompanied her recording journey:  pianist Chris Ziemba, drummer Jeremy Noller, and bassist Matt Aronoff. Adding striking orchestral textures are Tomoko Omura on violin and Michael Sachs on bass clarinet and alto sax. Brazilian jazz musician Vitor Gonçalves adds masterly accordion work on two tracks. Production credit goes to bassist Steve Rodby of the Pat Metheny Group. Although Johnson arranged every piece on the recording, she credits her bandmates — who first collaborated as a group in 2014 — with shaping the music over the course of dozens of gigs, particularly regular performances at NYC’s Cornelia Street Café. Unraveled tells the story of an artist and her band coming together and forging a fresh, distinctive sound unlike that of any other ensemble on the scene. Johnson will celebrate the release date (March 20) with a performance at Rockwood Music Hall Stage 2 (196 Allen St, New York, NY) from 7-8pm. Ticket link here.

Over the past decade, Johnson has joined an exclusive coterie of brilliant singers and collaborated with a dazzling array of New York City’s most creative and adventurous artists. Equally adept at delivering wordless melodic lines like a virtuoso horn player and interpreting profound lyrics with emotional acuity, she often performs with intrepid vocalist peers including Portuguese-born Sara Serpa, Argentinian Sofia Rei, and LA native Michael Mayo, a rising star. She has also contributed to acclaimed recordings by the Andrew Rathbun Large Ensemble, Brian Carpenter’s Ghost Train Orchestra, Joe Phillips’ Numinous Ensemble, pianist Jason Yeager, and the inimitable Bobby McFerrin, on his 2010 Grammy-nominated VOCAbuLaries.

Unraveled opens with the Johnson-arranged jazz/pop excursion “No More ‘I Love You’s’,” a 1995 hit for Annie Lennox originally written and recorded by the 1980s English duo The Lover Speaks (aka David Freeman and Joseph Hughes). Johnson’s composition, the heartrending ballad “Love Again” revels in vulnerability, with a melody that rises as the emotional stakes peak. Set to a seductively slinky groove played with percussive precision by Noller, the title track, another of Aubrey’s own compositions, combines a spritely, eminently danceable melody with a poignant portrait of mounting inner angst. Jimmy Rowles’ “The Peacocks” — a tune also known as “A Timeless Place” after vocalist Norma Winstone added her own lyrics — is delivered with impressive poise, control and range, allowing Johnson to make the piece truly her own. Antonio Carlos Jobim’s bossa nova standard “Dindi” is performed here hauntingly in its original Portuguese. The languorous, Johnson-composed “Lie In Wait” captures the nagging inner monologue inspired by a prolonged separation in a romantic relationship.

Altogether,  the album serves as an ideal showcase for Johnson’s impressive songwriting talents, yet it also includes two songs by her esteemed album collaborators. Saxophonist Michael Sachs composed and arranged the sumptuously detailed and pop-influenced “Happy to Stay” — an exquisite melody buoyed by Tomoko Omura’s insistent pizzicato pulse. Omura, knowing Johnson’s affinity for Brazilian music, also composed and arranged the innovative samba “Voice Is Magic,” adding the additional challenge of including a lyric in Japanese. Then there is “These Days,” Johnson’s captivating art song setting for a verse written by her brother, Gentry Johnson.

Johnson’s abiding passion for the treasure-laden Brazilian songbook injects another jolt of creative energy into the album’s concluding tracks. She offers a bravura wordless romp through Egberto Gismonti’s “Karate,” playing tag with Vitor Gonçalves’ playful accordion and Chris Ziemba‘s piano “on the least ‘arranged’ track on the record,” says Johnson. “I’ve always had a penchant for singing wordless vocal melodies and a habit of trying to find melodies that seem impossible to sing.”

As an undergrad at Western Michigan University, Johnson studied classical and jazz voice and joined Gold Company, the university’s world-renowned vocal jazz ensemble. A standout performer, she won two DownBeat Collegiate Student Music Awards for “Best Jazz Vocalist” and “Jazz Vocalist, Outstanding Performance.” She made her auspicious recording debut in 2007’s Essence of Green (Origin Records) by pianist Ron DiSalvio and legendary drummer Jimmy Cobb. Western is also where she first connected with piano master Fred Hersch, “a great influence and mentor and friend,” she says. On Hersch’s advice, the Green Bay, Wisconsin native began her NEC master’s degree in jazz performance in 2007, during which she studied with Danilo Perez, Jerry Bergonzi, Dominique Eade, Allan Chase, George Garzone, and Frank Carlberg. Graduating with honors, she was awarded the Gunther Schuller Medal for “making an extraordinary contribution to the life of the school,” and won her third DownBeat Magazine Collegiate Student Music Award, for outstanding performance in jazz voice.

It was during her college years that she also forged a deep musical connection with her uncle, Lyle Mays, the pianist and composer who gained fame with the Pat Metheny Group. In 2009 and 2010, she contributed wordless vocals and auxiliary keyboards for Mays, including concerts at the Zeltsman Marimba Festival and the Gilmore Keyboard Festival, where she performed several world premieres of pieces written with her unique voice in mind. By the time she made the move to New York City in 2011, Johnson had recorded with Bobby McFerrin on his Grammy-nominated album VOCAbuLaries (EmArcy). While commuting to Boston to teach at Berklee, where she remains a member of the faculty, she quickly became known as an essential new voice on the scene, performing with a daunting array of artists and ensembles, including Fred Hersch’s Pocket Orchestra, Sara Serpa’s City Fragments, John Zorn’s Mycale Vocal Quartet, Joe Phillips’ Numinous Ensemble, Andrew Rathbun’s Large Ensemble, Rose and the Nightingale, and Travis Sullivan’s Bjorkestra. A dedicated educator who has given master classes and workshops around the world, Johnson is also on the faculty at Queens College in New York.

The seeds for her band were sown in Boston, where she met violinist Tomoko Omura in the Guy Mendilow Ensemble, a world folk combo, and they bonded instantly over their commitment to jazz. Omura’s incomparable skills as an improviser continue to provide inspiration for Johnson’s writing and arranging. Reed expert Michael Sachs was part of her circle of friends at NEC, with whom she reconnected in New York City. She first encountered Ziemba, Noller, and Aronoff on a session to which she brought several original pieces, “and they sounded so great that I ended up using them on my first gig as a leader in New York,” Johnson says. The group gained so much attention through a series of performances at Cornelia Street Café, Shapeshifter Lab, the Kitano, Zinc Bar, and the Cell Theatre that she didn’t think twice about using the same cast on her debut album.