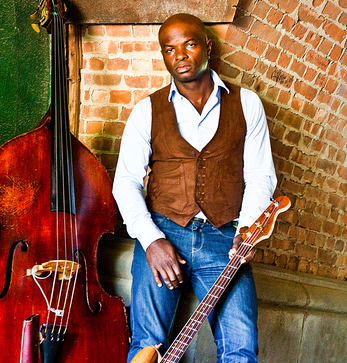 By Ralph A. Miriello, Notes On Jazz

Being associated with a generous and talented mentor can be a powerful impetus to your own creative development and musical maturity. Bassist Richie Goods’ latest album My left hand man, is a tribute to Goods’ mentor, the late great pianist Mulgrew Miller, who Goods recorded and toured with for nine years.

Miller, an astute educator, was the Director of Jazz Studies at William Patterson College in New Jersey from 2005 until his untimely death in 2013, from a stroke. Miller, a gifted composer, often encouraged younger musicians under his influence while quietly creating his own musical legacy. I recall seeing Miller as a surprise guest on a Kenny Garrett gig at the Iridium in NYC (most likely in 2012). I marveled at the reverence and respect that the pianist’s simple presence incited among the musicians who were present. Saxophonist Garrett’s then pianist, Venezuelan born Benito Gonzalez, relinquished his piano seat and happily stood behind Miller mesmerized, marveling and absorbing Miller’s developed pianistic approach and refined touch. Mulgrew Miller’s influence on and stature amongst the jazz community was self-evident.

Goods openly acknowledges the important exposure that he received working with Miller, but the bassist was also active in his own development. After graduating from Berklee in Boston, the Pittsburgh native moved to New York where he studied with two of the most respected bass players in jazz, Ray Brown and Ron Carter. Goods increased his exposure to the music’s legacy by working with artists as diverse as Lenny White, The Headhunters, Vincent Herring and Milt Jackson. His talent as a jazz/funk master opened up opportunities to work with renowned popular artists like Sting, Chris Botti, Whitney Houston, and Alicia Keys.

My left hand man is a compilation of ten songs, nine of which Goods selected from the Mulgrew Miller repertoire. The songs were chosen for their suitability to the way Goods and his group likes to play. They like lots of energy infused with elements of  R and B; Soul, Fusion, Funk and Jazz, all integrated to attract a wider audience. The Goods Project personnel certainly deliver on that promise. This outing includes the Atlanta based drummer Lil John Roberts, two pianists- Shedrick Mitchell and Mike King, two guitarists-Tariqh Akoni and David Rosenthal, percussionists Danny Sadownick and Rafael Pereira, violinist/violist Amy Schroeder, cellist Felix Umansky and include guest appearances by chromatic harmonica ace Gregoire Maret, singer Jean Baylor and vibraphonist Chien Chein Lu.

The music is vibrant and energized as the potent rhythm section Goods and Roberts keep the pace always explosive and surging. The drums-driven “Eastern Joy Dance” starts off the set with some serpentine guitar lines by Akoni and some creative piano work by King. The always probing and vibrant bass lines of Goods lead the action.

Goods composition “The Left Hand Man,” derives from a name that the bassist received from Miller and features a warm, soulful acoustic bass solo.  Goods creates fluid and punctuated lines that establish an unaccompanied rhythm in just over a minute before he transitions into Miller’s “Know Wonder,” which is arranged in a more fusion style. Keyboard artist Mitchell offers cascading pianistic lines that spill over the rhythm-driven pulse, and  Rosenthal’s inventive electric guitar solo keeps this one quick and interesting.

“”Farewell To Dogma” spans the musical influences of soul, R and B, rock, and jazz.  Maret’s aching chromatic harmonica sets the high expressive mark and adds to the other instrumental voices that improvise over Goods pulsing basslines and Roberts’ throbbing drums.

“The Sage,” is played at a languishing pace, its genetics derived more from the blues than from jazz. Akoni’s guitar spells out the repeating melody line,  joined in unison with King’s piano for emphasis. Goods delivers a full-throated bass solo that features his quick flexible pizzicato technique and an engaging tone, as Robert’s tom-work creates a rhythmic blanket.

“Song of Darnell” and “Saud’s Run” were orchestrated to include the strings of Umansky’s cello and Schroeder’s violin featuring Geoff Keezer’s lush string arrangements. On the cinematic “Song of Darnell” the contrast to Rosenthal’s melodic guitar work is expansive, gorgeous and nicely featured against the swelling and ebbing accompaniment of the strings. King’s flowing pianistic improvisations are another highlight and Roberts ends with some explosive drum work at the coda.

“Saud’s Run,” a song more driven by a funky feel, utilizes the strings more to accent the rhythm and create an ostinato drive. Roberts’ drum pulse has a distinctive cardiac afib pace.

The album ends with “The Sequel,” a nice hard bop groove, and features Goods’ burnished acoustic upright bass. King is an impressive player that utilizes a reservoir of intriguing pianistic improvisational ideas while never losing the swing. Akoni’s guitar is soulful and Goods keeps the whole groove anchored and directional.

Richie Goods and his Goods Project band have taken Mulgrew Miller’s music, absorbed it and re-imagined it into the bassist’s own vision. The vibe may be less traditional than you might expect, but the music is played with respect and love and is modernized and energized with an unfailing groove.