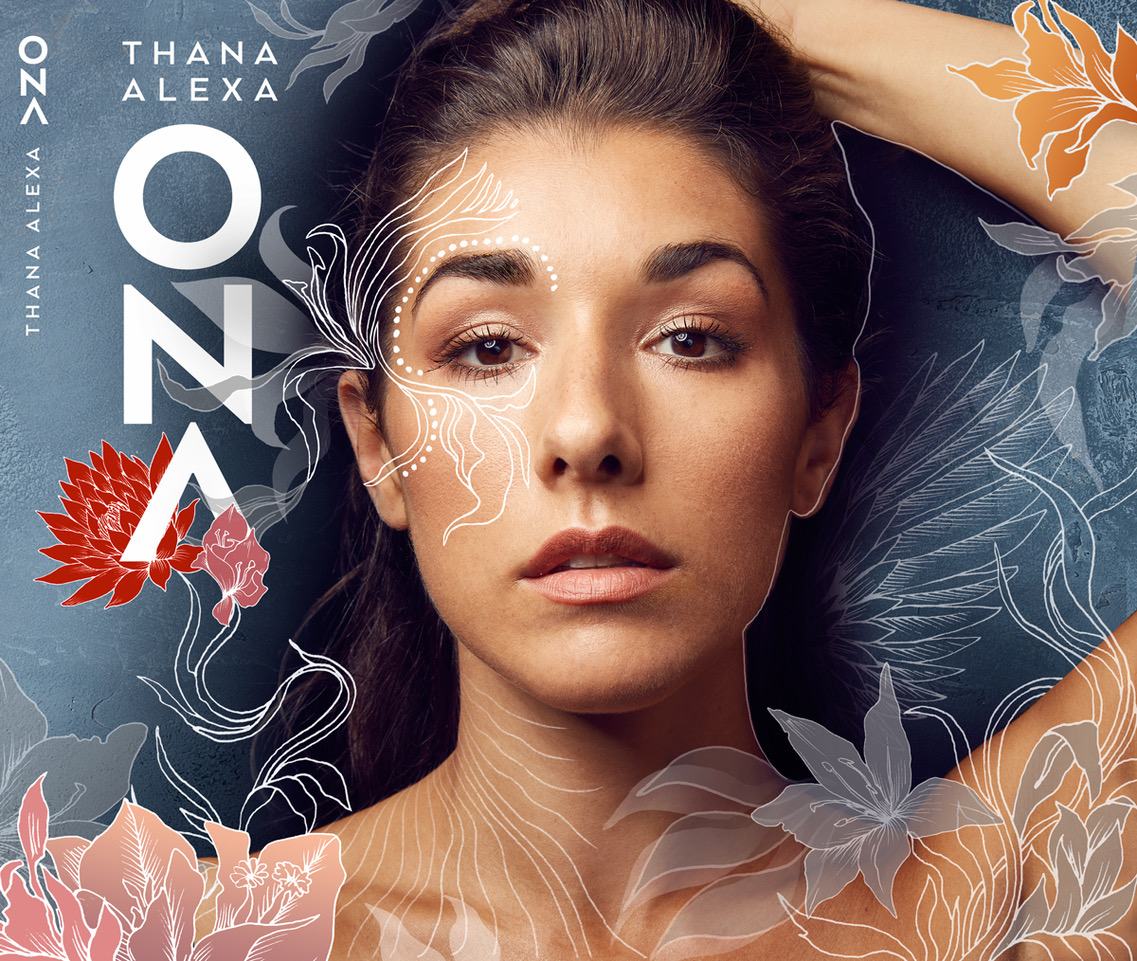 “Thana Alexa’s ONA is an exquisite work embodying boundless creativity and genre that stretches to every corner of the Earth, and the imagination. ONA is a story of strength, authenticity, and the deeply grounding nature of the divine feminine”
– Becca Stevens, Singer/Songwriter/Multi-instrumentalist

Vocalist and composer Thana Alexa is proud to announce the March 27th, 2020 release of her latest album, ONA. Throughout ONA, which is the word for “she” in her family’s native Croatian language, Alexa explores through eight unique original compositions and two outstanding new arrangements, the complex theme of what it means to be a woman. The tracks are at once deeply personal, in part reflecting Alexa’s Croatian-American roots, yet resonate with the many cultures of women who have come into her life and influenced her music. ONA ultimately embraces the experience of women everywhere.

Musically, ONA is a departure from Alexa’s first album Ode to Heroes (Harmonia Mundi/Jazz Village) and catapults her into new and uncharted territory. While ONA, too, is rooted in jazz, it showcases Alexa’s sonic pallet inspired by contemporary soul, world music and pop. Alexa’s use of her voice as both a lyrical and experimental instrument, her use of atmospheric sounds, electronics, soundscapes and textures, all give way to a hybrid sound that is uniquely her own and defies classification.

The idea for ONA evolved over the course of two years, but crystallized in early 2017 after Alexa attended the Women’s March on Washington, D.C., the largest single day protest in American history. “I have never felt so motivated to express my right to resist, to protest, to be heard and to support a positive movement of change”. Immediately following her return from the march she composed the showstopper “The Resistance”, thematically punctuated by the spoken word of poet and activist, Staceyann Chin. “Cassandra”, Alexa’s salute to the #MeToo movement honors the unheard and unrecognized women of the world who have suffered abuse, assault and harassment. The culmination of the stories she began to build through her compositions would go on to inspire ONA, the song and the rest of the album.

Propelled to explore the battles and burdens of women in her own life through the lens of five elements: the mind, the soul, sexuality, the struggle to redefine gender ascribed roles in relationships, and a woman’s inner strength, ONA morphs into a universal story of women everywhere. In Alexa’s own words, “ONA is the musical expression of what being a woman means to me. It is the discovery of the wild woman spirit within me and the experiences I’ve encountered in setting her free. It celebrates the inspirational women who have given me the confidence to realize my truth and express it freely.”

The title track, “ONA” opens with the equivalent of a rallying cry and marks the first time Alexa has ever written lyrics in Croatian and introduced ethnic sounds in her original compositions. The Croatian lyrics are comprised of sayings and teachings she has learned from her grandmother (with whom she speaks Croatian) and the English lyrics are rooted in life experience with her mother (with whom she speaks English). Alexa says, “It is a beautiful combination of the two most prominent female voices in my life.”

MacArthur Genius grant and Doris Duke award recipient, Regina Carter, makes a special appearance on the standout track “Pachamama.” Named for the Incan goddess of Earth and fertility, the track is a haunting call to protect our threatened environment. Of Alexa’s music Regina says, “Thana isn’t afraid to take risks. Her vocal performances are powerful, vulnerable, joyful, spiritual and genuine. Her use of rhythm, textures and intricate harmonies is unique and at times, complex. Sometimes you think you know where she is going, then she surprises you.”

In the darkly sensual “Animal Instinct”, which reveals the lover, Alexa expresses her unapologetic pride and comfort in her own sexuality in a world that often overlooks a woman’s needs and desires. Her arrangement of Massive Attack’s “Teardrop” further ignites the sensual imagination, showing how passion can be a tightrope walk between reality and fantasy.

The aching and delicate piano/vocal duet “Set Free” presents Alexa, the sister, as she reflects on the untimely death of her brother and the powerful bond that siblings share. The relationship between father and daughter is explored in her soothing, acoustic original “You Taught Me”.

The folky, Pan American influenced “He Said, She Said”, featuring Becca Stevens on voice, charango and ukulele, was written as a wedding present for Alexa’s best friend and her Peruvian husband. It charmingly portrays two people who throw themselves into love’s vulnerability, risking everything to be together because they believe in the power of their love.

The album closer – a truly original rendition of “Everybody Wants to Rule the World” by Tears for Fears – showcases Alexa’s affection for witty rhythmic intricacy mixed with modern harmonies.

Alexa made her mark in 2015 with her well-received debut album, Ode to Heroes, which she toured in the United States and Europe. She was nominated for a PORIN – Croatia’s Grammy equivalent – for Best Jazz Composition and also won the international Jazzon Alpe Adria Composition Competition. She has since been in the Downbeat Magazine Rising Star Female Vocalist Poll for four consecutive years (2016-2019). Most recently, in recognition of the uniqueness of ONA, Alexa recently received the first music production grant ever awarded in New York City by the Cafe Royal Cultural Foundation.

Perhaps Alexa’s most important and ongoing collaboration has been with her husband, five-time Grammy® winner Antonio Sanchez. Together with his band Migration in which she is the vocalist and lyricist, they have recorded and toured three critically acclaimed albums, including the most recent CAM Jazz recording Lines in the Sand. She has also toured and recorded four albums with guitarist Gene Ess and appeared as a vocalist with bassist Michael Olatuja’s Lagos Pepper Soup among others.

ONA has spawned additional female-focused projects: Alexa, together with Grammy® nominated artist, Nicole Zuraitis and one of NYC’s most versatile and sought-after bassists, Julia Adamy formed SONICA, an exciting trio that fuses electronics, vocal loops, three-part harmonies, electric bass, keyboards and percussion into their unique original music and arrangements. Alexa also created the project Founding Mothers of Jazz in conjunction with MusicTalks Concerts to celebrate and honor the powerhouse women who helped build the jazz genre from the ground up, many of whom were not historically recognized for their contributions because of their gender.

Alexa’s ONA is much more than an album. It is a call to action that has reshaped the artist’s identity. Alexa concludes, “ONA conveys what I have learned about the lives of women, starting with my own, our experiences, our emotions, our sexuality, our worth, and our ability to overcome injustice by fighting for what we believe in.”

No woman or man will be untouched by ONA’s universal message.