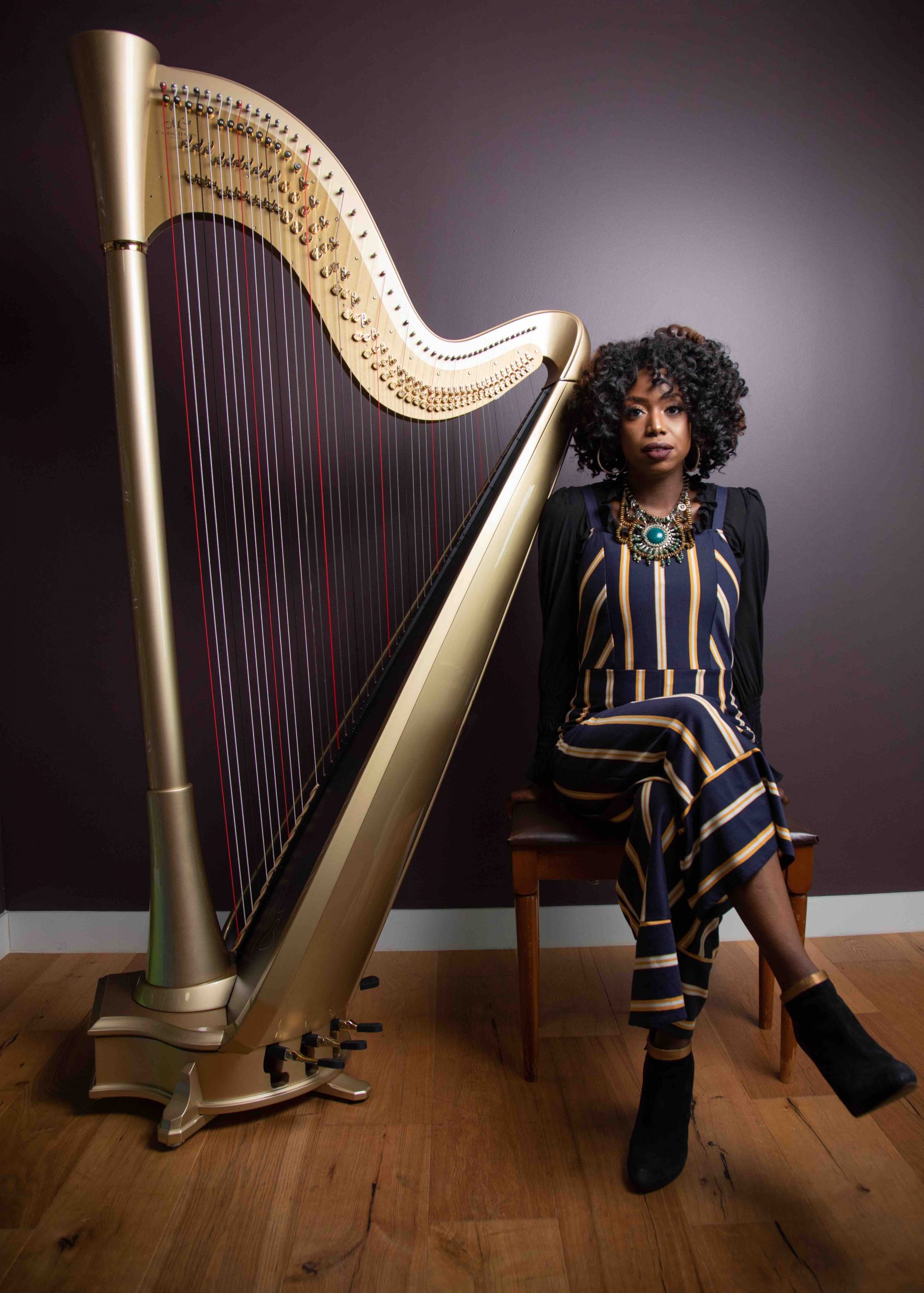 By Elisa Shoenberger, She Shreds

Brandee Younger is bringing the harp to new levels, following in the footsteps of her heroes: Alice Coltrane and Dorothy Ashby.

Brandee Younger was once determined to bring her harp into unconventional places. Not the easiest to carry around, the acclaimed musician has played the harp in studios, bars, and other places with the cumbersomely large instrument—often having to carry it up and down flights of stairs.

The morning of our interview, Facebook’s “On This Day” feature brought up a seven-year-old photo of Younger and her harp underneath the Brooklyn Bridge, before her gig at Fat Cat later that evening. For Younger, she wanted to show the versatility of the instrument: “I want people to know that the harp can belong anywhere. We don’t have a ‘place.’”

While many people may only associate the instrument with classical music, Younger is one of several contemporary harpists to play jazz and other musical stylings on the instrument. The self-managed musician is the founder of the Brandee Younger Quartet, and has performed alongside a broad spectrum of artists including Ravi Coltrane, John Legend, The Roots, and Lauryn Hill, to name a few, as well as a variety of acclaimed symphonies and orchestras. Her original music has been featured on Beyoncé’s Netflix documentary, Homecoming, as well as HBO’s TV series, Random Acts of Flyness.

But Younger’s not just about playing jazz or classical music: “I didn’t want to only play Bach. I wanted to play what I heard on the radio. I just wanted the harp to become more relevant in music and not just be limited to classical and Celtic music.”

When Younger started playing harp as a child, she wore out the Alice Coltrane CD her parents gave her. She remembers thinking, “This sounds way cooler than my method book—I want to do this one day.” Before Google made finding information more accessible, Younger went on a quest to find Coltrane, even asking acquaintance and legendary trumpet player, Clark Terry, how to contact her—but to no avail.

After high school, Brandee studied harp and music business at the Hartt School of the University of Hartford, and then attended New York University for graduate school. At the same time, she also joined the faculty in the Hartt School Community Division and began developing working relationships with musicians like Slide Hampton and Ryan Leslie.

In 2007, Ravi Coltrane asked Younger to play in an ensemble at the Ascension Ceremony in honor of of his mother, Alice Coltrane, who had died earlier that year. The opportunity was monumental to Younger’s career, who was only 22-years-old at the time, but not in the way she expected. “It was a point for me to realize, and accept in myself, that I knew I didn’t want a career as an orchestral harpist,” says Younger. “Up to that point, I was dipping my hand in everything—jazz, lots of orchestra, top 40—but this narrowed it down for me. You play this odd instrument but you are not sure where you are able to fit in, or what you can do with it. But it was a moment where I definitely wanted to go in this [jazz and non-classical] direction.”

In 2011, Younger released her first EP, Prelude, followed by 2014’s Live At The Breeding Ground and 2016’s critically acclaimed Wax & Wane. Last year, Younger independently released the album Soul Awakening six years after completion—the very first album recorded by her own ensemble and including performances by her jazz mentors, Ravi Coltrane and Antoine Roney. A 2019 NY Times blurb claimed that Younger “has almost single-handedly made a persuasive argument for the harp’s role in contemporary jazz,” but with a “a hip hop mentality,” which Younger claims was major in terms of finally feeling seen musically.

Ashby produced 11 solo albums, including her most famous, 1968’s Afro-Harping. Along with her husband, John Ashby, she formed a theater group, best known as the Ashby Players, in which she created the music and lyrics, and which offered early theatre opportunities for black actors. The topics, Younger points out, “were about welfare and abortion, all the same issues that we are dealing with now in 2019.”

In the 1970s, Ashby was living in Los Angeles, working in recording studios and playing with pop artists, including Stevie Wonder and his song, “If It’s Magic,” featured on the 1976 album, Songs in the Key of Life. She passed away from cancer ten years later, leaving behind a legacy that expanded the capability of both the harp and black women in jazz. In a 1983 interview for the W. Royal Stokes book, Living the Jazz Life, Ashby remarked, “The audiences I was trying to reach were not interested in the harp, period—classical or otherwise—and they were certainly not interested in seeing a black woman playing the harp.”

Younger notes that for all of her genius and prolific work, Ashby never truly got her due, but people are finally catching on. Artists like Jay Z,  Kayne West, and J Dilla were sampling her in the 1990s and beyond, and in hip hop sessions producers now ask for the “Dorothy vibe.”

Alice Coltrane (1937-2007) started playing piano as a teenager in Detroit. She had a promising career ahead of her having already worked with Cannonball Adderley and other jazz legends before she was 20 years old. But it wouldn’t be until the early ‘60s, when she met and married legendary jazz saxophonist and composer John Coltrane, that she would find her calling.

In 1966, Coltrane joined her husband’s band as a pianist; however, a year later he passed away from liver cancer. The New Yorker noted that John had ordered a harp to add musical texture to his own music, but the instrument didn’t arrive until after his untimely death. In the midst of her grief, Coltrane began to play the harp, resulting in the beginning of an unparalleled jazz legacy.

In 1970, Coltrane met Swami Satchidananda, a spiritual guru that changed her life. She traveled to India, changed her name to Alice Coltrane Turiyasangitananda, opened a spiritual center, and cultivated a community in Southern California. Her spiritualism resulted in a withdrawal from the professional music scene, only performing during her devotions and services. However, her son Ravi got her back into the recording studio one last time for 2004’s Translinear Light, one of the final albums of her career.

Despite releasing over 20 albums as a bandleader and changing the landscape of jazz and the harp’s role in it, Younger points out that Coltrane existed in the shadow of her husband—some even called her “Yoko Ono to John Coltrane’s Lennon.” But more and more artists are paying homage to Coltrane, including Radiohead, Björk, and Erykah Badu. And with Soul Awakening, Younger is working to give her idols their due. “I made a conscious decision 10 years ago that everything I do, in some shape or form, pay homage to Alice and Dorothy,” she says.

Today, the harp is finally finding its place with more musicians like Younger who use it to play diverse styles of music. In addition to Younger, there’s Carol Robbins, one of the few students to be accepted as a student by Ashby, and who has been in Billy Childs’ Jazz Chamber Ensemble since 1999; Zeena Parkins, a jazz and free improvisation harpist who has played with Björk, Yoko Ono, and many others; Lori Andrews, who has recorded eight albums and played for four presidents, as well as Oprah Winfrey and Frank Sinatra; Joanna Newsom, a classically trained harpist whose unique music styling is most often described as psychedelic folk; Mary Lattimore, who has released five solo albums and performed with notable artists such as Thurston Moore and Waxahatchee; and many more contemporary woman harpists.

Thanks to Dorothy Ashby and Alice Coltrane, who paved the way for today’s women harpists, the instrument has reached new levels. The two served as pioneers and role models on both a “cultural and musical level,” Younger says, noting the importance of representation. “They opened the door for me and so many other players.”