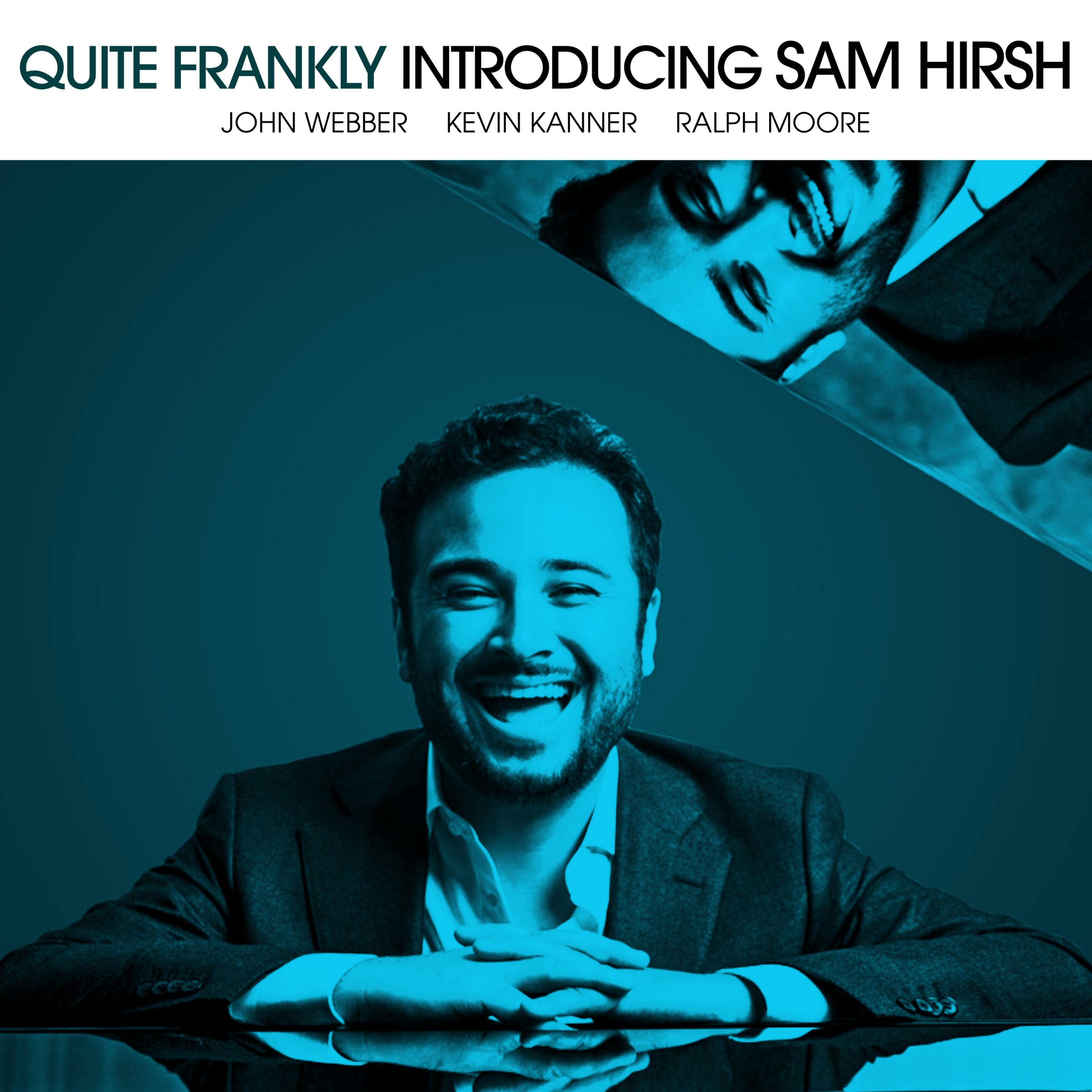 Sam Hirsh Releases Quite Frankly, His Stunning Debut Album as a Bandleader, on February 7th

Pianist, composer and educator Sam Hirsh is pleased to release Quite Frankly, his debut album as a bandleader, out February 7th.  The album was recorded to celebrate the pianist’s thirtieth birthday and tenth year as a staple musician in the jazz scene in Los Angeles.  Joined by a bicoastal cadre of world-class improvisers, Hirsh introduces a set of original tunes inspired mostly by family and friends.  On this release, Hirsh is accompanied by bassist John Webber, drummer Kevin Kanner, and renowned saxophonist Ralph Moore.  Berkeley-based writer Andrew Gilbert notes that the music’s “open-hearted emotional immediacy is as striking as the trio’s relaxed cohesion.”

Having been called a “seasoned artist with a preternaturally old soul,” Sam Hirsh delivers a thoughtful album of original material with strong ties to the lineage of jazz on Quite Frankly.  Hirsh notes, “I think a lot about keeping the tradition of this music alive, but in my own unique way.  This project marks the beginning of what I hope will be an evolving life long journey.”

Hirsh’s frequent collaborator Ralph Moore is best known for his work with Horace Silver, Dizzy Gillespie, Roy Haynes and Freddie Hubbard.  Hirsh recalls when he nervously invited Moore to perform with his band at The Lighthouse.  “Ralph has played with me many times now and we’ve become good friends. I’ll never forget when he said he ‘hears where I’m coming from’ when he plays my tunes.”

Quite Frankly strikes a personal chord with Hirsh, with meaningful dedications behind the vast majority of tracks on this release.  The title track itself is dedicated to Hirsh’s late friend Frank Ambrose, an older retired truck driver who would often listen to Sam perform in his earlier years.  The bright swing of the tune was inspired by Ambrose’s collection of swing records which he introduced to Hirsh in his formative years. The gospel-tinged melody gives way to Hirsh’s first solo on the album, displaying the young pianist’s stunning facility on the keys, a soulful sound harkening back to the stylings of Cedar Walton.

Hirsh’s father is a bebop saxophone player from Chicago, living in Portland, Oregon.  Sam grew up playing in his father’s band, and composed the tune “Pop’s Delight” with his father in mind.  “He hipped me to my favorite pianist Cedar Walton when I was young,” Hirsh recollects, “one record in particular: ‘Just One of Those Nights’ live at the vanguard with Cedar, David Williams, Billy Higgins and Ralph Moore.  Ralph is my dad’s favorite living tenor player, so to have Ralph play this melody on my debut record was very special.”  The track features a solo by Moore, masterfully displaying his melodic invention on what Hirsh refers to as “fun changes to blow on.”

“Look For the Silver Lining” is the sole standard performed on this album.  Jerome Kern’s masterpiece is interpreted as a beautiful, reflective ballad played in a trio context.  Inspired by Chet Baker’s rendition of this piece, Hirsh’s performance is every bit as lyrical and uplifting; while also demonstrating the profound interplay between the bandleader and his rhythm section.  Hirsh’s mid-tempo blues “No C!” is the perfect outfit for Ralph Moore’s muscular tenor sax sound to soar over a spirited trio.  Hirsh remarks that this particular high-energy track has become his theme song of sorts; the title refers to the spelling of the artist’s last name which “everyone always spells Hirsch”.  This ebullient track, and seminal release go far to place the name “Hirsh” among those at the very frontline of the jazz idiom.

Pianist, composer and educator Sam Hirsh has been an active and in demand member of the Los Angeles jazz scene for a decade and is gaining recognition for his soulful, energetic sound.  He has performed with various acts along the west coast, Taiwan, Bolivia and New York City.

Born in Kyoto, Japan, Sam grew up in Portland, Oregon, where he would start playing piano at age 4.  Classically trained, he began playing jazz his freshman year of high school influenced by his father, a jazz saxophonist.  One year later he was working professionally, leading his own piano trio and working with various local artists including his father’s quintet.

In 2009, Hirsh was awarded a considerable scholarship to Los Angeles’ University of Southern California Thornton School of Music where he was mentored by Russ Ferrante, Otmaro Ruiz and Alan Pasqua.

Hirsh graduated in 2012 and has been performing all over southern California since.  He can be seen playing with the Bill Holman Big Band, Melissa Morgan, Henry Franklin, Carl Saunders, Gilbert Castellanos and Roy McCurdy, to name a few.  His current project is the Sam Hirsh Trio performing original compositions and arrangements. Sam’s debut album “Quite Frankly,” featuring New York heavyweight John Webber on bass, Los Angeles drummer Kevin Kanner and saxophone icon Ralph Moore, is set to release on February 7th, 2020.