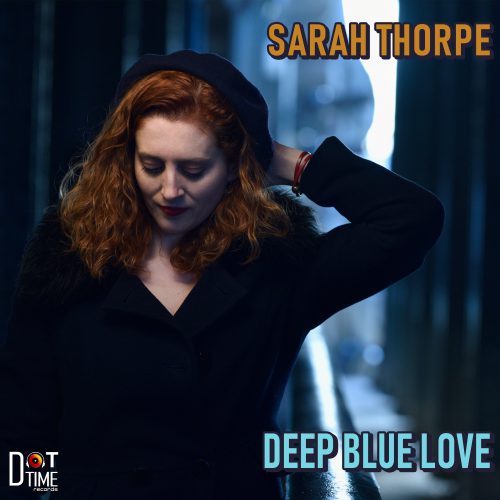 There’s something special about jazz music in Paris. Maybe it’s the the beautiful architecture, the atmosphere, the ‘joie de vivre’ – who knows? Jazz vocalist Sarah Thorpe lives and works there, it was where this album was recorded with musicians who also live there or have strong ties to the City of Light.

Deep Blue Love is her second album following 2015’s Never Leave Me and features a powerful lineup that shows the depth of quality on offer: pianist Olivier Hutman, double bassist Darryl Hall, drummer John Betsch and trumpeters Josiah Woodson and Ronald Baker. Sarah had some good luck too, thanks to an introduction to saxophonist/flautist TK Blue (Talib Kibwe), Randy Weston’s musical director for 25 years, who in turn introduced her to Dot Time and came on board to arrange some of the repertoire and play on the album.

The assembled band played a few gigs around Paris to lock the songs and arrangements down before heading to the studio. As well as Sarah’s four original compositions, the songs chosen are trumpeter Marcus Printup’s Sunday Daydreaming (The Bishop) with Sarah’s lyrics, Wayne Shorter’s Infant Eyes with lyrics by Dianne Reeves, Carmen Lundy’s To Be Loved By You, Randy Weston’s Pretty Strange with lyrics by Jon Hendricks, Pat Metheny’s When We Were Free (here titled Free), with lyrics by Pamela Watson and Horace Silver’s Lonely Woman.

The songs sound as if they were recorded quickly in the studio and are all the better for it. The title track opener is a catchy uptempo groove, Sarah sings well and shows off her range, the rhythms section locks down, the horns kick in and the solos take off. It’s a strong, catchy start. Throughout the rest of the album her voice is clear and soars with strong melodies and plenty of feeling, I especially enjoyed her own ‘Urban Nostalgia’ and ‘Sweet Love Serenade’ and Printup’s ‘Sunday Daydreaming (The Bishop)’.

Although this is very much a Sarah Thorpe album she gives the musicians plenty of space to express themselves. TK Blue plays some marvellous solos, especially his flute on Free and alto on Pretty Strange and ‘Infant Eyes’. Ronald Baker plays a fine trumpet solo on To Be Loved By You, while pianist Olivier Hutman offers the vocals sympathetic support and his solos sparkle. As for Darryl Hall and John Betsch, this is a top-notch rhythm section that handles the wide range of grooves and tempos impeccably.

My father was a Francophile and would occasionally light a Gauloise and leave it burning in the ashtray to take him back to the Paris of his younger days. I might just start following his example with listening to Deep Blue Love, which takes me straight back to the rue des Lombards quicker than any Eurostar.