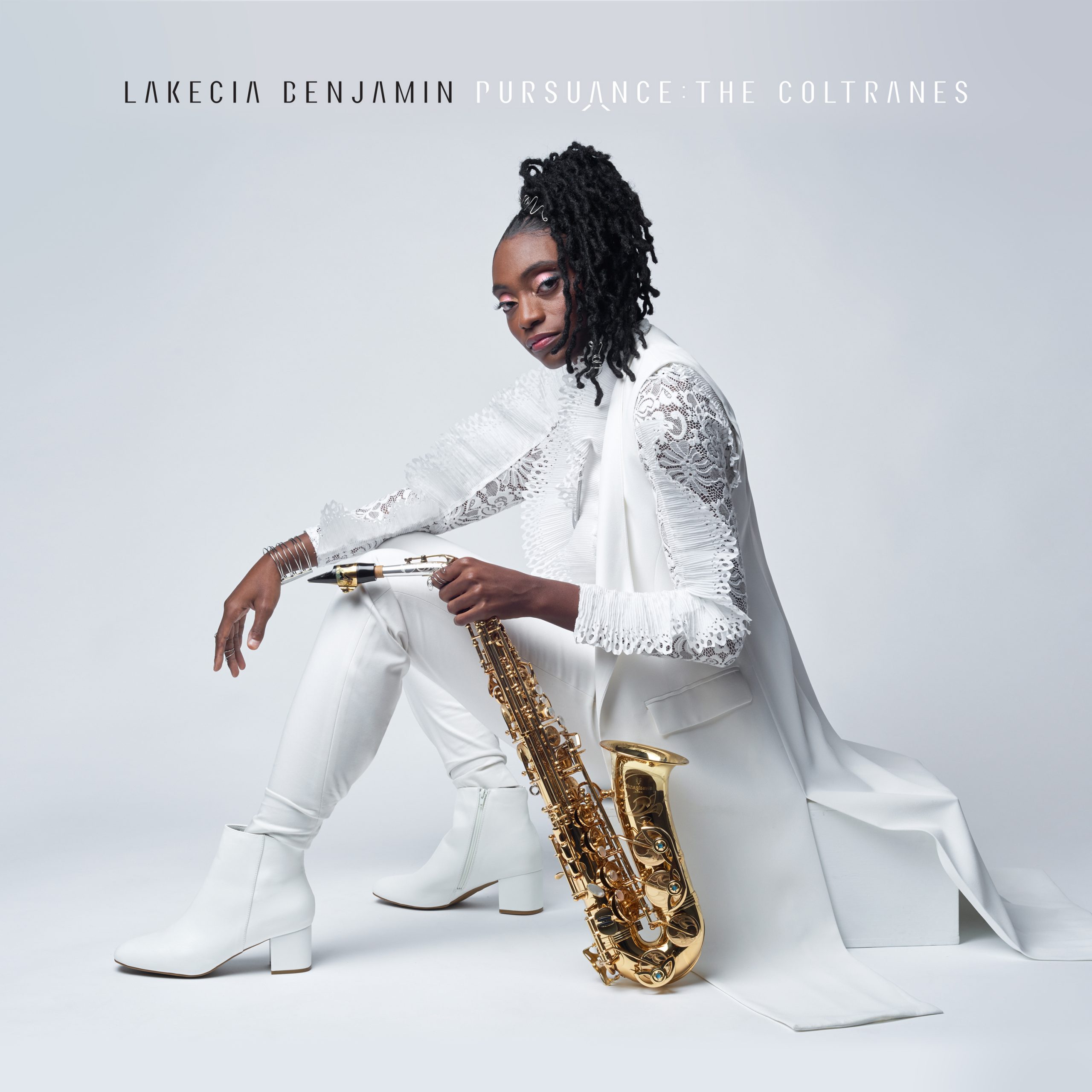 On March 27, 2020, the dynamic young saxophonist Lakecia Benjamin delivers her masterwork, Pursuance: The Coltranes. A cohesive walk through the lineage of the jazz artform, Benjamin’s third full-length release as a leader pays homage to two of the greatest musical innovators of the 20th century, John and Alice Coltrane.  As Abiodun Oyewole iterates as part of Benjamin’s rendition of Coltrane’s classic “Acknowledgment” off of the groundbreaking album ‘A Love Supreme’, “John Coltrane was a vessel, taking us to the house of god, he spoke to god in the language god knew, in the language of sound.”  With this release, Benjamin opens herself up as such a vessel, speaking timeless truths through her horn over the medium of Coltrane’s classic compositions alongside elders of this artform who bore witness to the conception of this material.  Under the tutelage of jazz luminary and co-producer Reggie Workman whose supple bass lines underscored countless Alice and John Coltrane’s recordings, Benjamin has assembled an astonishing cross-generational ensemble of over 40 jazz heavyweights that includes Ron Carter, Gary Bartz, Regina Carter, Dee Dee Bridgewater, Meshell Ndgecello, Steve Wilson, Marc Cary, Keyon Harrold, Marcus Strickland, Brandee Younger and Jazzmeia Horn — Three generations of musical titans gathered to celebrate and further the message of the great maestros of this improvisational artform, John and Alice Coltrane.

There’s always been an undeniable mystical, enticing element to the music of the Coltranes and on Pursuance, Benjamin is mindful of retaining the underlying spirituality of these compositions – “they were writing songs to indian gods, to christian gods, to muslim gods – their whole idealogy was that every religion is one and we’re all one with god.”  In this regard, Pursuance speaks to the unifying nature of the jazz artform.  Every member of this cross-generational recording ensemble welcomed the opportunity to collaborate and pay homage to each other.  “Music is a reflection of our times; a reflection of the spirit of our times,” Benjamin continues. “In our current social and political climate, we need music to heal the soul.”  Just as the timeless compositions of the Coltranes connected with audiences of yesteryear, Pursuance brings this material into 2020 with carefully conceived modern arrangements.  Each of the thirteen tracks on Pursuance are tunes that instantly resonated with Benjamin upon first listen – seven of which originally composed by John, with six credited to Alice. The selection includes “Liberia”, “Prema”, “Central Park West”, “Walk With Me”, “Going Home”, “Syeeda’s Song Flute”, “Spiral”, “Om Shanti”, “Alabama”, “Acknowledgement”, “Pursuance”, “Turiya and Ramakrishna” and “Affinity”.

On the album’s opening track, “Liberia”, Benjamin conjures up every bit of intensity and fervor possible from her stellar lineup of legends.  A regal rubato gives way to a bright-tempoed swing, over which both bandleader Benjamin and consummate saxophonist Gary Bartz take flight.  Acclaimed vocalist Jazzmeia Horn shines on Benjamin’s stunning R&B-tinged rendition of John Coltrane’s classic “Central Park West”.  Horn’s beautiful performance of Benjamin’s original lyrics paired with Chris Rob’s organ playing delivers a soulful take on this ballad.  Benjamin goes on to deliver an incendiary performances of “Syeeda’s Song Flute” and “Spiral” off of John Coltrane’s groundbreaking 1959 album Giant Steps.  The bandleader is joined on “Syeeda’s Songflute” by bass legend Ron Carter.  Carter is one of the only members of this lineup to have performed with both Alice and John Coltrane.  To Benjamin, these particular musicians and their unique experiences contributed hugely to the articulation and delivery of this project – “the best part of creating this record was embracing this first-hand knowledge that these jazz heavyweights brought to the studio – they know the chords, the spirituality of the music, the mindset they were in when they first performed some of these tunes.”

Benjamin then moves on to pay tribute to Coltrane’s classic A Love Supreme with her performance of “Acknowledgment” and “Pursuance”.  Alongside the bandleader, several generations of musicians, all of whom moved by Coltrane’s masterwork, paying homage to the great master.  Dee Dee Bridgewater sings lyrics she wrote to Coltrane’s “Acknowledgement”, adding her signature effortless elegance to the track.  “Pursuance” features pianist Marc Cary who channels McCoy Tyner on this classic track.  The final track on the album, “Affinity” was composed by Alice Coltrane and features special guests Reggie Workman and Greg Osby.  This track’s passion and force ends the album on a high, displaying the stunning facility of each of the improvisers and the enduring power of these timeless compositions.

With a final reflection on this project, the saxophonist and bandleader brings light to her utmost admiration for the Coltranes and their collaboration that, musically, spiritually and emotionally culminated in one, whole, complete unit – “as an artist, it’s difficult to balance your personal life and career. This is a perfect example of a couple who had the best of both worlds – they took care of themselves, took care of the music, worked together, played together and they exemplified a completely functional, amazing relationship. You don’t need to sacrifice your art or your love – you can be one complete whole individual.”