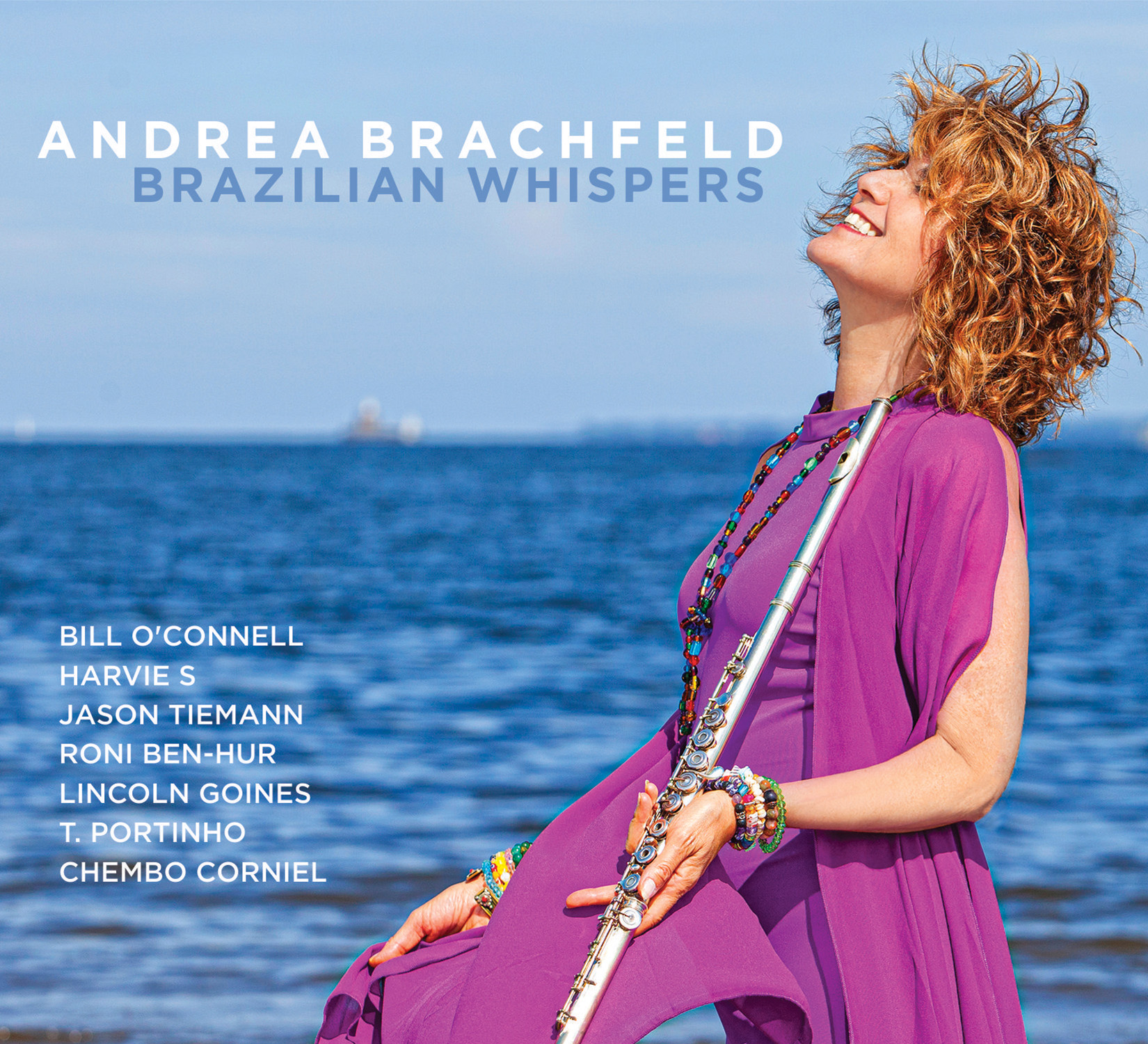 Flautist Andrea Brachfeld’s CV reads like a who’s who of Latin jazz. A graduate of the Manhattan School of Music, and a recipient of some of the genre’s most prestigious accolades (including the 2006 Chico O’Farrill Lifetime Achievement Award), she has recorded and/or performed with such luminaries as Paquito D’Rivera, Tito Puente, Slide Hampton and Wallace Roney. In a career spanning four decades she has released eight albums under her own name and been a sidewoman on countless others. Consequently, her latest effort, Brazilian Whispers, is the culmination of an incredible amount of experience performing and composing Latin jazz; it is appropriate, then, that it should be a dedication to the legendary Brazilian composer, Antonio Carlos ‘Tom’ Jobim, and feature eight of his tunes.

Half the record employs the same rhythm section as her most recent release on the Jazzheads label, If Not Now, When?, consisting of frequent collaborator Bill O’Connell on piano and Fender Rhodes, veteran Harvie S on upright bass, and NYC-based drummer Jason Tiemann. It is this band that graces the first tune of the album, Jobim’s Double Rainbow. Underpinned by a driving jazz waltz feel from Harvie S and Tiemann, the head sees Brachfeld’s earthy flute tone blend effortlessly with O’Connell’s Rhodes, reminiscent of Joe Farrell and Chick Corea on the latter’s seminal album Light as a Feather. The asymmetric form poses no problems for Brachfeld, who takes a fluent, athletic solo, followed by a melodic, robustly rhythmic interpretation of the changes by guest Israeli guitarist Roni Ben-Hur.

The same line-up accompanies Brachfeld on her swinging arrangement of another Jobim tune, Waters of March (Aguas de Março); this one showcases dextrous solos and trading from the flautist, who digs in with the swaggering rhythm section, and O’Connell, who clearly has astounding technical facility and a highly developed modal approach to the piano. Tiemann dishes out some explosive and spontaneous comping here and takes an assured, if short, solo before the head out. Brachfeld credits the idea of playing Jobim’s pithy melody over Tiemann’s shuffle feel to the ‘genius’ of O’Connell, and it certainly results in a novel take on a familiar composition.

Other highlights with this line-up include a convincing reworking of the Livingston/Evans standard Never Let Me Go, intended as a tribute to the late trumpeter Roy Hargrove. Brachfeld opts for the larger alto flute here, demonstrating a beautifully rich, deep sound which is complemented perfectly by some colourful voicings from O’Connell. The pianist takes a wistful, searching solo, and the outro grooves with a spirit and intensity that Hargrove would surely have admired. O’Connell returns to the Rhodes for his and Brachfeld’s original Triste e Solitaria, a gorgeous tune very much in the style of Jobim but with a slightly more adventurous harmonic approach, and probably the most successful track on the album. Harvie S solos first, leaving us in no doubt about his virtuosity, and is followed by thoughtful contributions from O’Connell and Brachfeld which retain the melancholy character of the piece.

The rest of the album sees Brachfeld and O’Connell staying put, but with a change of bassist and drummer. Session legend Lincoln Goines fills Harvie S’s seat, albeit on electric bass, and T. Portinho (whom Brachfeld considers to be one of the most important drummers in contemporary Brazilian music) takes up the drum chair. In addition, world-renowned conga player Chembo Corniel provides some very authentic percussion, and Ben-Hur is again featured on several numbers.

This ensemble has more of a fusion feel to it; Jobim’s Ligia again conjures up a Corea vibe, with Goines’s superior electric bass tone and active, contrapuntal bass lines providing a strong basis for a flowing solo from Brachfeld. Portinho, as the music calls for, takes a more assertive role than Tiemann, grooving hard and accenting melodic phrases to heighten their impact. Ben-Hur feels less assured in this setting than he did with the acoustic rhythm section, his solo slightly missing the mark rhythmically in a genre where groove is everything.

Brachfeld’s Samba Medley, comprised of two Jobim tunes and one by Bruguera and Rovira, is a slight let-down in the context of an album which otherwise flows very well. While Portinho and Corniel’s accompaniment is quintessentially Brazilian, and Ben-Hur’s comping suits the nature of the melodies chosen, the way in which the songs are stitched together is slightly uninspiring. They are all taken at the same tempo, are played in the same key, and have the same groove; this means it is almost impossible for the piece to develop effectively, and the outcome is quite one-dimensional.
That aside, the same line-up produces an inventive reading of The Girl From Ipanema, as reharmonised by Brachfeld. The flautist’s stylish arrangement breathes new life into a hugely overplayed and clichéd tune, and spurs her and her bandmates on to deliver some fiery improvisations over a heavily grooving Goines and Portinho. Brachfeld’s solo sees her swooping delicately over the entire range of the flute, but also digging in rhythmically more than she does on other parts of the album. This tune features another accomplished solo from O’Connell, who sounds totally at ease with its rapidly shifting key centres.
The second band’s other choice cuts include Sonhos e Cores, a well-written, dramatic Brachfeld/O’Connell original which benefits immensely from Corniel’s percussion. It contains one of the flautist’s best-developed solos, and a display of tasteful melodicism from Ben-Hur. Passarim, another Jobim tune, is also good, Brachfeld’s multi-tracked flute creating a pleasant orchestral effect which contrasts with the rest of the album. The last tune, O’Connell and Brachfeld’s Espaço Aberto, is a harmonically complex, high-energy romp with a great solo from Goines, and an effervescent way to cap things off.

In all, this is a record which features a lot of great music and a lot of great musicians. Brachfeld and O’Connell, the common denominators, have done an admirable job of arranging Jobim’s music in fresh and innovative ways, as well as writing originals which draw heavily on the Brazilian tradition but also bring in influences from modal and straight-ahead jazz. It is accessible without being unsophisticated, and is very ambitious, bringing in multiple line-ups and exploring different song forms. The only criticism I might have is that Brachfeld doesn’t always explore her large pool of ideas to their fullest extent, meaning that interesting concepts such as the medley end up sounding rushed and half-formed. For the most part, though, Brazilian Whispers is well thought-out, accomplished, and above all is a fitting tribute to the ‘father of bossa nova’.