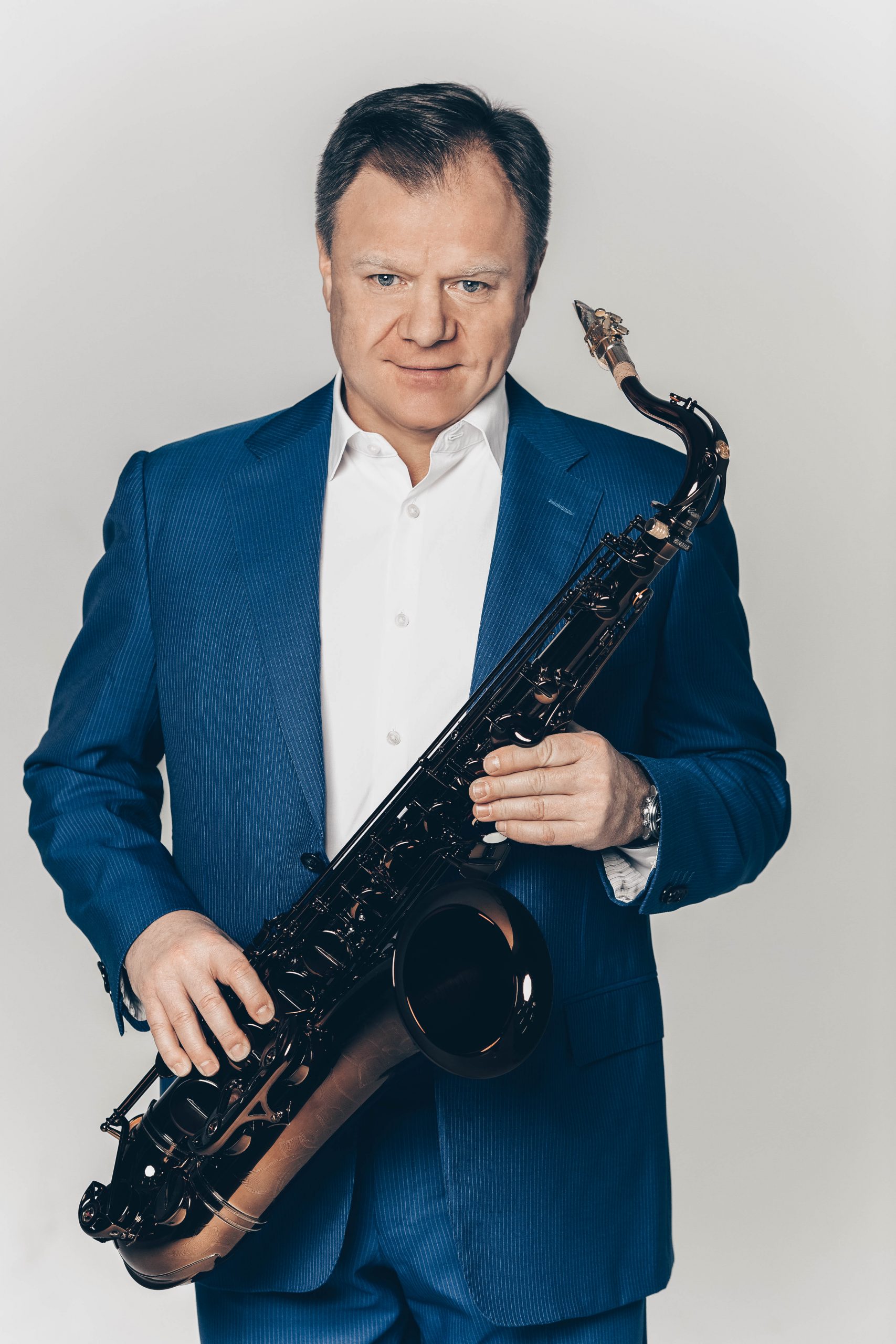 “Mr. Butman is a steamroller of a saxophonist, with a broad tone and a hard-charging rhythmic instinct.” – Nate Chinen, The New York Times

“I love Igor Butman’s playing and I love him personally. He has a great feeling for the music and for people and he’s a phenomenal musician.” – Wynton Marsalis

This coming January, world famous saxophone player, bandleader and producer Igor Butman will travel to the United States for a five-city tour of some of the country’s most celebrated jazz institutions.  The tour will mark the twentieth anniversary of Butman’s acclaimed Moscow Jazz Orchestra, a 16-piece powerhouse ensemble described by DownBeat Magazine as “an outfit of virtuosos.”  Butman, a firm proponent of cross-border and cross genre-collaboration, has performed with a long roster of jazz greats including Dave Brubeck, Chick Corea, Lionel Hampton, Grover Washington Jr and Wynton Marsalis, among others.  The jazz luminary continues his ambassadorship of modern Russian culture with his upcoming Winter tour of the United States. Butman, along with the Moscow Jazz Orchestra, will perform at the Blue Note, in New York City January 30th through February 2nd, at the Keystone Corner in Baltimore on February 5th, at the South Miami Dade Cultural Arts Center on February 7th in Cutler Bay, Florida, at The Promontory in Hyde Park, Chicago, on February 9th, at Center Makor in Boston on February 12th, and at the Blue Llama in Ann Arbor, Michigan on February 13th.

Fostering cross-cultural communication between the United States and Russia through the language of music and the deeply democratic art-form of jazz, the bandleader showcases two distinct ensembles of young Russian-American musicians who showcase the global prominence of America’s one true original artform.  In particular, two musicians stand out as extraordinary young ambassadors of their craft;  Evgeny Pobozhly, recent winner of Herbie Hancock Institute of Jazz Guitar Competition and extraordinary pianist and vocalist Oleg Akkuratov, 2nd prize winner at the 2018 Sarah Vaughan Vocal Competition.

This level of cultural interplay is nothing new to Butman who, alongside Wynton Marsalis, was awarded The American-Russian Cultural Cooperation Foundation’s (ARCCF) Award and Institute of Sustainable Dialogue Award in recognition of their distinguished contributions to American-Russian cultural relations through musical collaboration.  In addition, in 2017, he successfully launched Jazz Across Borders, the first jazz conference in the history of Russia which became annual.

The first string of performances at Blue Note Jazz Club will feature the Moscow Jazz Orchestra and the remainder of the dates will feature Butman’s iconic quintet.  The Igor Butman Quintet is a congregation of Russia’s topmost jazz soloists: guitarist Evgeny Pobozhiy, extraordinary pianist and vocalist Oleg Akkuratov, bass player Sergey Korchagin and drummer Eduard Zizak.  Moscow Jazz Orchestra, founded in 1999 has an intense history of international touring which started in 2003 with a sensational double bill performance with Wynton Marsalis and the Lincoln Center Jazz Orchestra.  Over the course of the past two decades, the orchestra created programs with numerous jazz superstars including George Benson, Dee Dee Bridgewater and Kurt Elling and many more.  MJO became the first orchestra to perform at the All-Star Global Concert of International Jazz Day which was held in St. Petersburg in 2018 under the artistic leadership of Butman alongside Herbie Hancock.  The orchestra features Butman on tenor, alto and soprano saxophones; Oleg Akkuratov on piano; Evgeny Pobozhiy on guitar; Anton Chekurov on alto saxophone and flute; Ilya Morozov on alto saxophone and flute; Daniil Nikitin on tenor and soprano saxophones; Alexander Berenson, Pavel Zhulin, Ivan Akatov and Hayk Grigoryan on trumpet; Sergey Dozhenkov, Oleg Borodin, and Pavel Ovchinnikov on trombone, Nikolay Shevnin on bass trombone;  Eduard Zizak on drums; and Sergey Korchagin on double bass.

Butman will kick off his Winter U.S tour with four nights at New York’s iconic Blue Note Jazz Club alongside MJO.  The four night stint runs from January 30th to February 2nd, with two sets each night beginning at 8:00 and 10:30.  Tickets begin at $20.

The remaining dates will feature Butman’s smaller outfit – the Igor Butman Quintet, which includes the MJO rhythm section of pianist Akkuratov, guitarist Pobozhiy, bassist Korchagin and drummer Zizak. Butman and his quintet will travel to Maryland for two nights at Baltimore’s Keystone Korner on February 5th and 6th. Each night, the set begins at 7pm and tickets will start at $20.  The following night, February 7th, the quintet will perform at South Miami Dade Cultural Center in Cutler Bay, Florida at 8:30pm.  Tickets are $35 ahead and $40 at the door. Butman then will advance on to Chicago, where he will perform at The Promontory at 8pm. Tickets range from $20-30. On February 12th, the quintet will perform at Center Makar (Jewish Educational and Cultural Center) in Brookline in Boston and then Butman will conclude the tour on February 13th at Michigan’s Blue Llama Jazz Club in Ann Arbor. Tickets are available here for the performance. See below for more information on each of the dates.

The saxophonist owns Igor Butman Jazz Club in Moscow, which, for the past decade, has ranked annually as one of the the top jazz clubs of the world by Downbeat magazine. In 2016, Butman was elected as the President of the Author’s Council at the Russian Authors’ Society (Russian equivalent of ASCAP, SACEM or GEMA). In 2017, Butman successfully launched Jazz Across Borders, the first jazz conference in Russian history- the conference just celebrated its third year this past November. In 2018, Butman served as co-artistic director with Herbie Hancock at International Jazz Day in St. Petersburg.