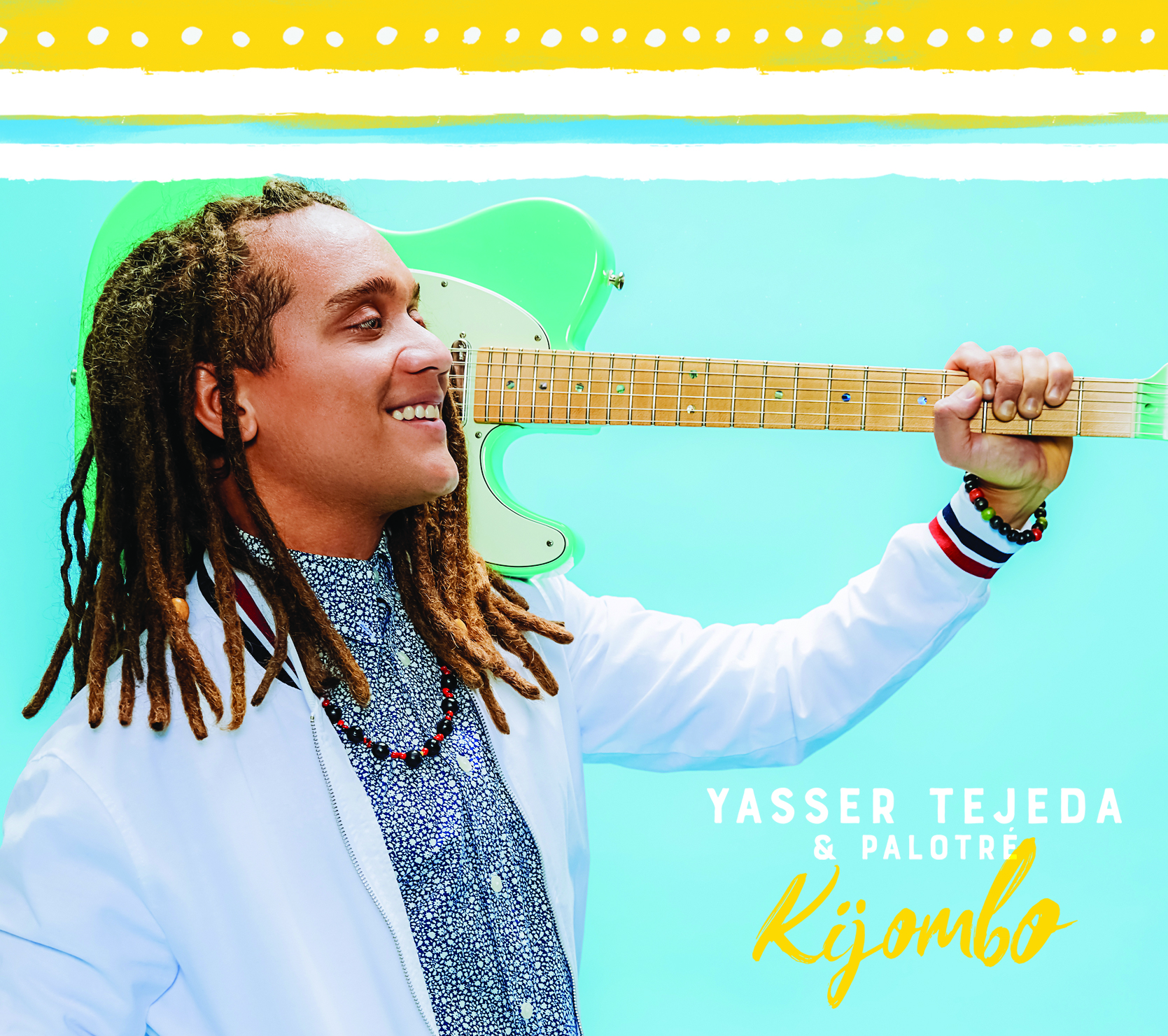 Surely, you’ve already identified this as Latin music and possibly Latin jazz. Yet,  that’s only partially right. it’s broader than either one.  Yasser Tejeda’s music on Kijombo is, at least in the U.S. and many countries, the seldom heard roots music of the Dominican Republic, here re-imagined by the New York-based guitarist into compositions that range from jazz to rock to funk performed by his Dominican band, Palotre, augmented by great New York-based musicians. Here you will hear echoes of Santana and Hendrix as well as the familiar Latin percussion beats along with soul, funk, and R&B grooves too.  Yes, surprises await on several tracks, especially the mind-blowing accordion of El Prodigio Krency Garcia on “Swing Ripiao.”

Mining traditional Dominican folkloric rhythms that are played in the countryside of DR, Kijombo takes you on a journey to the “Other” Dominican Republic, beyond the popular merengue and bachata, to its sacred “back country” sounds stemming from Afro-diasporic cultures. These roots music styles draw from the country’s Afro-Caribbean heritage as well as influences from Spain and indigenous cultures that predate colonization. These traditions range from the interlocking drums of Palos, to the Haitian-influenced mobile dance party known as Gaga, to the aforementioned accordion shredding called perico ripiao. In many cases, we call these styles sacred because they are connected to African-descended spiritual practices, many conducted out of sight from forces in the Dominican society that sought to repress them.

Tejeda’s band Palotré is made up of drummer Victor Otoniel Vargas, percussionist Jonathan Troncoso and bassist Kyle Miles. The project has spawned three commercially and critically successful singles including the opening “Nuestras Raices,” that have garnered attention from multiple outlets.  It’s a celebratory vehicle of Dominican palo rhythms that mixes together three different percussive instruments called ‘Palos’, a hyperactive horn section and Tejeda’s power chord guitar, sounding like Carlos Santana in his early 70s Caravanserai moment.  “The lyrics of this song are about motivating younger generations to explore their roots, inspire people to follow their dreams and create new ideas.” Some, like this writer, also liken Tejeda’s guitar style to that of King Sunny Ade’ as the sound, at least on the aforementioned track, bears some resemblance to African juju music.

Perhaps the album’s most lyrical track is “Amor Arrayano,” featuring Vicente García’s singular songwriting and vocal skills. Recalling the dexterity and poetic impact of his work on Candela, García offers up a tale about a difficult love between a Haitian man and a Dominican woman who live on opposite sides of the border between the two countries. “Arrayano means that you are half-Haitian and half-Dominican,” said Tejeda. “But it also refers to the people that live in that border region. The guy in the song is offering a chant to Papa Legba, the god of the crossroads, to open a path for him so he can go to Santo Domingo to see his woman.”

Tejeda grew up in Santo Domingo, Dominican Republic, moved to Boston to study at Berklee School of Music and is now based in New York. In addition to his pursuit of roots music ecstasy, he has toured extensively with pop star Prince Royce and recently collaborated with longtime friend Vicente García on his latest album Candela. After moving to New York in 2013, Tejeda put together his band Palotré: drummer Victor Otoniel Vargas, percussionist Jonathan Troncoso and bassist Kyle Miles. Palotré was ready to bring all the long-established Dominican experiences into one mix, merging the traditional Dominican culture with Jimi Hendrix, bebop, and the blues. It may sound complicated but it works beautifully.