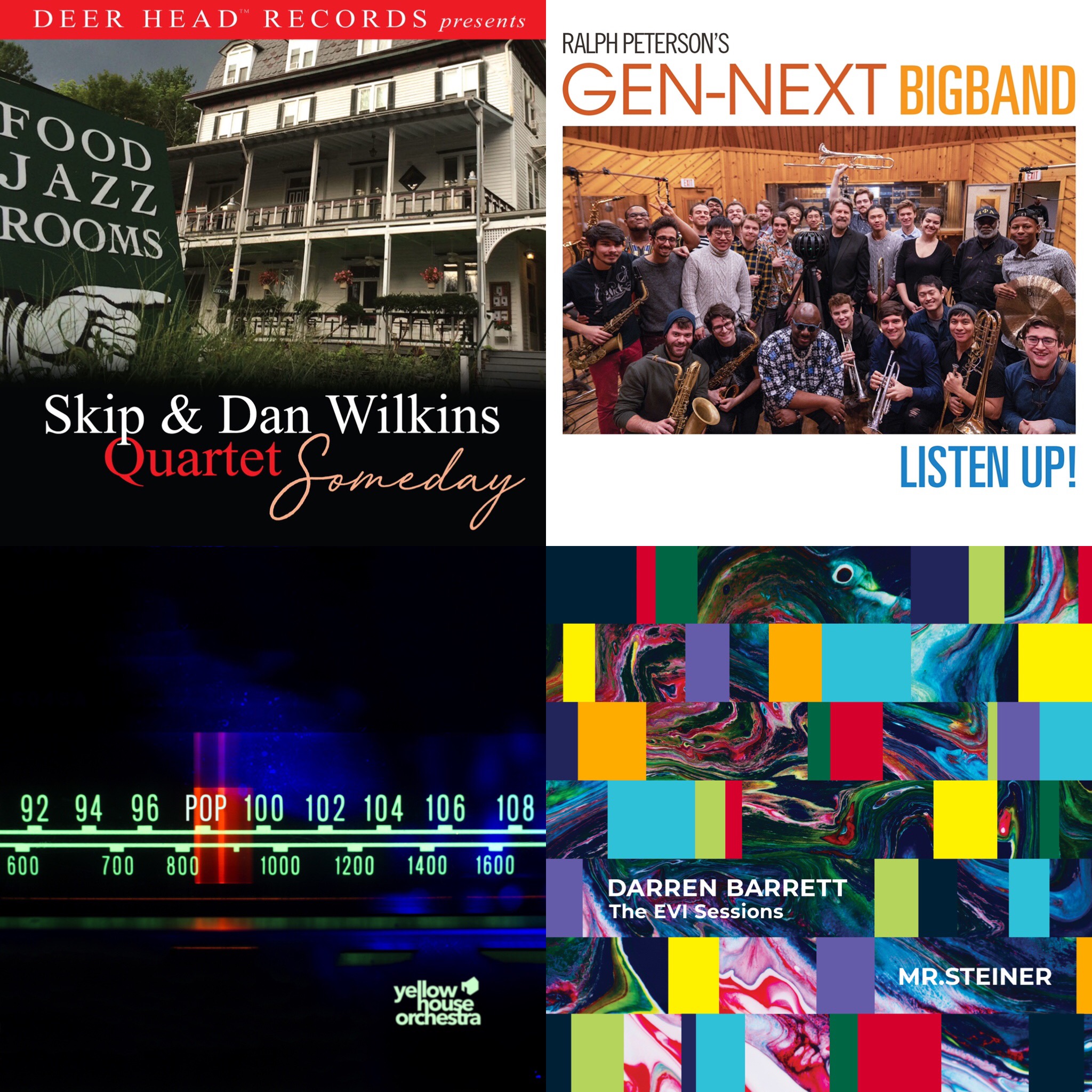 This is a delightful album of somewhat obscure compositions by some of the most iconic American composers in the business of music. Skip and Dan Wilkins use their excellent talents to introduce us to songs like, “Spring Isn’t Spring Anymore” by Matt Dennis, “Remind Me” by Jerome Kern and Dorothy Fields and “Ever Again” by Alec Wilder and Johnny Mercer, among others. Dan Wilkins has a smooth, intoxicating sound on tenor saxophone. Skip Wilkins is an amazingly competent and creative pianist. Together, with Tony Marino on bass and Bill Goodwin at the drum set, this is a thoroughly entertaining quartet. “Someday” is a love letter to the historic Deer Head Inn of Pennsylvania. It’s one of the oldest, continuously running jazz clubs in the country. Open since the 1940’s, it’s situated in the Pocono Mountains, a historic area of Pennsylvania called Delaware Water Gap. Many legendary jazz artists have performed there and in 1992, Keith Jarrett recorded a ‘live’ album on the premises and his album title reflected that home of jazz. Skip & Dan Wilkins have done the same, displaying a photograph of the legendary jazz hotel on the cover of this current CD.

Pianist, Skip Wilkins is quite familiar with this respected jazz establishment. He has resided in an upstairs apartment, above what used to be the carriage house, since 2012. Surprisingly, I read in the liner notes that the drummer on this project, Bill Goodwin, is also a fellow resident at Deer Head Inn. Perhaps this musical residency is something to be thankful for, since it brought these talented gentlemen closely together for this project.

On the first tune, “We’ll Meet Again” father and son team, Skip and Dan Wilkins, offer us a lovely rendition of the Parker & Charles composition, “We’ll Meet Again.” The chord changes sound very much like “This is the End of a Beautiful Friendship” and I find myself wondering which tune came first? Like this quartet, I too have a passion for the American Songbook. The Skip & Dan Wilkins quartet brings each composition alive with skill, dexterity and emotional deliveries. Longtime collaborator, Tony Marino, is strong and steady on his upright bass. You can tell that this group of musicians are quite familiar with each other and their comfort-level and technical abilities merge to create a beautiful album of historic relevance. They offer an hour of exceptional jazz music. In fact, I found myself playing this album again, just for the pure enjoyment of it.

This Is a blend of electronic jazz, using the Hip Hop concept of looping to open Darren Barrett’s album, while incorporating straight-ahead jazz susceptibilities. With a repetitive melody line played beneath his compositions, Barrett builds on this basement of sound, using the most important element of jazz; improvisation.

Barrett’s production concept is unique, because of the use of the EVI. His first original composition, titled Mr. Steiner” is meant to celebrate the synthesis guru, Nyle Steiner, who is credited for the invention of the EVI or Electronic Valve Instrument. Steiner also invented the EWI (Electric Wind Instrument). The jazz audience may have become familiar with this invention when it was employed popularly by saxophonist, Michael Brecker. Darren Barrett’s creative concept is to pair the full potential of the EVI with other instruments thus, creating a fresh, unique approach to his arrangements. The EVI is a midi wind controller. It’s a wind instrument that is capable of controlling any midi synthesizer, using breath control as an important component for expression. Similar to a trumpet, octaves are achieved through the octave roller with the left hand. Notes are played with the right hand, based on conventional trumpet finger-rings. The players air-wind controls both volume and brightness.

Darren Barrett exudes, “The EVI, for the trumpeter, is just another instrument one can add to their arsenal just like the Flugelhorn or mutes. It’s not only fun to play, it opens up your mind to new things.”

Track 2 incorporates a laid-back, Smooth -jazz feel titled, “Keep It Moving,” Darren Barrett brightly features this EVI instrument. Roy Ben Bashat adds electric guitar. The EVI and guitar make a compatible soundboard. Santiago Bosch offers his keyboard magic and Mathéo Techer waves his drum sticks like a magician’s wand. This composition by Darren Barrett once again uses a repetitive ‘hook,’ or refrain, that the band continuously goes back to play. Barrett is a very melodic composer. Another interesting use of the EVI is that it can be played as a mono-tone or can harmonize with itself as a polyphonic tone, using two or more notes at the same time. Barrett employs this technique on “Nu Vibrations.” The poly-harmonics, along with synthesized voicings, paint an unexpectedly rich, palate of sound on this fourth track.

This project of composing and arranging music with Barrett’s concept of celebrating the EVI instrument took the trumpeter about a year of preparation. He has added some celebrated musicians in contemporary music as his special guests. They include the soprano saxophone of Kenny Garrett on “dB Plus KG” and tenor saxophonist, Noah Preminger is spotlighted on “Botnick.” Barrett also features talented guitarist, Kurt Rosenwinkel on his composition, “Deal for Real.”

To assist him with EVI issues, with programming, and to serve as a technical consultant, Darren Barrett invited Mark Steiner, nephew of Nyle Steiner to the studio. The result of combining a list of gifted musicians, special guests, and employing his own composer, arranger and production talents, is a strong musical package. Darren Barrett stretches the boundaries of contemporary jazz in a fresh and notable way. He is grateful for the new technology. This is his eleventh album release as a leader. It may be one of his more exceptional productions, blending electronic invention with ingenuity.

It all started with this project below titled, “dB-ish” back in 2017.

RALPH PETERSON AND THE GENNEXT BAND  – LISTEN UP!

When I see Ralph Peterson’s name, I immediately know I’m going to listen to a high quality, high energy project. Thankfully, this CD did not disappoint. “Listen Up” is the first studio CD from the Peterson popular student band. I believe the former Gen-Next Big Band was recorded ‘live.’ On this production, all of the arranging (except for two songs) was done by Berklee music students and they recorded ‘live’ in the studio. Peterson praised them saying:

“They demonstrate maturity, finesse and exuberance as arrangers and players.”

This is Peterson’s second album celebrating the legacy of legendary drummer and bandleader, Art Blakey and his famed Jazz Messengers. This is a follow-up to the Gen-Next Band’s 2018 debut release titled, “I Remember Bu.” I reviewed that first release and it too was full of energy and excellence. Roger H. Brown, the President of Berklee College of Music spoke highly of Ralph Peterson.

“Ralph teaches jazz the way he and many of the greatest players learned their craft, from making the music with a torch bearer committed to passing on the knowledge. Ralph has toured with Art Blakey, Betty Carter, Michael Brecker, Branford Marsalis and many of the greatest players of this music. His students deeply appreciate him and learn about composition, arranging, performance and life. The commitment the students make is remarkable,” spoke Berklee’s president.

This journalist listens to hundreds of projects each year and these young musicians and students sound as professional as some of the name jazz musicians I review. In some cases, they sound more professional. The Gen-Next Big Band opens with a Curtis Fuller composition titled, “Arabia.” It’s an up-tempo arrangement by Will Mallard and a great way for the band to make a grand entrance. Mallard also solos on trumpet, as does baritone saxophonist Gabe Nekrutman. But what surprised me was that Ralph Peterson soloed too, not on drums (as I expected) but on muted trumpet. I enjoy the time changes during this arrangement and the flute solo by Joe Melnicove was awesome.

Track 2 is a Ralph Peterson composition, “Acceptance,” and Peterson is back behind his drum set, trading drum solos with the talented drummer, Christian Napoleon. The band plays a couple of Bobby J. Watson’s compositions and on Hoagy Carmichael’s beautiful “Skylark” tune, they add the sweet vocals of Chole Brisson. Freddie Hubbard’s “Down Under” composition ‘swings’ and is propelled by the magic in Peterson’s drum sticks. It’s not often you hear a bass trombone solo, but Ethan Santos surprises us with his improvisation on this instrument. John Michael Bradford is impressive during his trumpet solo.

Ralph Peterson’s Gen-Next Big Band is a wonderful listening experience and made me want to grab my flat shoes and a swing-dance partner, then hurry to the dance floor! Congratulations are in order to each of these young musicians who contributed to an excellent project in an entirely professional way.

Planning a party? The first track on this album exudes happiness. If you are looking for a New Year’s Eve party album that features World music, this is it! Yellow House orchestra is pop, rock, jazz and Latin all rolled into one cross-cultural ball of multi-colored music. The first cut and title tune, “Pop” goes from funk to reggae in the blink of an eye and the slap of a drum stick. Then the arrangement embraces Latin grooves, all within the same six minutes of energetic, well-played music. Drummer, Robby Ameen, is to be heralded as a super-star. He plays it all! Michael Cerda is the composer and is certainly musically explorative and definitely artistic. He sings, plays bass, guitar and writes the songs for the group. Grammy winning trombonist, Doug Beaver, is the arranger and producer of this self-contained ensemble. Here is a project, ultimately about openness and inclusiveness. It appears to be a part of something bigger than oneself, with the goal of showing the amazing diversity in music. Just like humanity, this project is colorful and beautiful. Cerda is joined by a tight harmonic group of backing vocals that sing in both Spanish and English.

Based in San Francisco and New York City, (a wide range of miles apart), like the wide range of music they explore, Yellow House Orchestra is a unique musical experience. They are definitely a party band. These musicians show up to enjoy, to interact, to explore and spotlight how human differences enhance the world of music and the world itself. They string styles of music together like a rare, jeweled necklace. Then they gift that unique piece of musical creativity to us. Thankfully, we have the opportunity to enjoy its incomparable beauty.