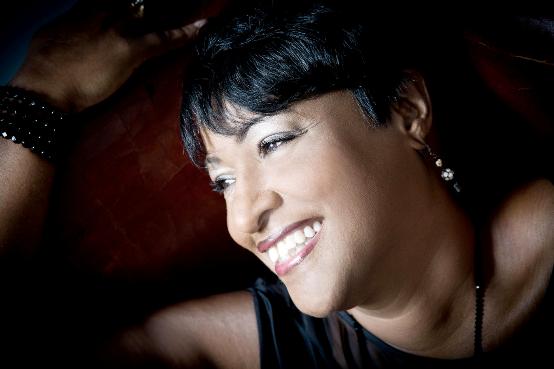 Cleveland-born singer VANESSA RUBIN has been a fixture in New York since the 1980s. She made several albums for RCA/Novus in the 1990s, has a new album of songs by Tadd Dameron, but  this is quite probably her debut in the UK. Ahead of concerts in London (21-23 November at Pizza Pheasantry) and then in Spain, Stephen Keogh (*) talked to her about her early life in Cleveland, the move to New York, and the two times she was ‘nearly’ booked to perform at Ronnie Scott’s:

LondonJazz News: What was the jazz scene like in Cleveland when you were growing up?

Vanessa Rubin: I heard it was very vibrant. Those were different times then; a different audience too. Real jazz enthusiasts who sought out live jazz music and spent their money on live entertainment. I was not visiting jazz clubs as a young girl. However, my older siblings were and they shared many stories about going to places like Leo’s Casino to hear people like Nancy Wilson and Wes Montgomery, and even The Temptations. In the black community, it seemed we celebrated all the popular black music and groups.

There seemed to be so many in the ’50s, ’60s and ’70s. Some venues featured more than just jazz per se. Older Cleveland jazz musicians, many now gone, used to tell me about groups playing in popular Cleveland venues like Sirrah’s House which used to feature a young George Benson who was playing with organ groups like Jack McDuff. The Blue Chip, The Tropicana, The Theatrical Grill, The Majestic Hotel, Lancers Steak House, to name a few of the older ones. Later ones like Isabella’s, The Togo Suite, Bob’s Toast of The Town, Tuckers Casino, Tucker’s Place , The Black Cat, and Night Town were a few in which I honed my craft before moving to New York. I caught the end of a few of the older ones like Lancer’s..

LJN: You studied with Barry Harris at the Jazz Cultural Theater in New York. Can you describe briefly what the experience was like?

VR: Barry Harris was always very nurturing, as he is today. He carries so much information and history in his head and the best way to get it out is through his playing. So he would teach us songs and expressed the importance of learning the right melody. He would play gorgeous chords and would also be teaching piano players who would stand by the side of the piano and watch and show them the right chord changes. Sometimes he would let one of them play. It was never like a traditional classroom with a chalk board and a teacher standing in front of the room. It was totally interactive, organic and in the moment. Like jazz is!

Rehearsals for his concerts would be there. He would play with his trio there too. There was a small kitchen in the back where you could buy a little something to eat. Folks rolled in and out all day. You could buy music paraphernalia there too. I bought a whole set of drawings of jazz artists by the great bassist John Heard. That’s where I met Frank Foster who also taught a class there. You could ask questions and just talk. A lot of what I heard sometimes went way over my head, as I was not that astute in music theory, but that also taught you how to listen. That was invaluable. I still have some of Frank’s hand-written lessons; a packet from which I continue to learn from and share with students when I do clinics. I didn’t have much going on at the time so it was a cool place to just be and network and learn something, anything, about jazz. Writing this makes me remember those good times and warms my heart. They were special times.

LJN: Could you give three pieces of advice, drawn from your own life experience, to young jazz vocalists who are at the beginning of their journey?

VR: One, prepare for the long haul. This is a long-distance race. Two. Have patience and be well grounded in something bigger than yourself. Work on yourself too as well as the music. To do this music right is a great honour and a sacrifice so humility is a must. Three. No matter what, through the journey, have fun! There is so much joy that comes with giving to an audience and getting from an audience. You will experience the humanity at every level so enjoy and laugh a lot.

LJN: How would you compare the scene in the New York of the early ’80s when you moved there, with the New York of 2019, and would you say that it is still a place that every aspiring jazz musician should visit?

VR: New York now is very different from the ’80s when I arrived. But the ’80s was very different from the decades before I arrived so it constantly changes. It must. Technology has contributed to making the world even smaller so a lot of people and their information are accessible through it. I don’t think you need to live there in order to be in jazz, but a visit is quite enjoyable if possible. The city is exciting unto itself. There’s a lot more than jazz in NY. I recommend to aspiring as well as established artists to develop performance spaces and venues and/or encourage existing venues to bring in jazz music. A thriving scene is any city is good. You don’t have to go to NY to see anyone if you know they will be making the rounds in your area on a regular basis. Folks in Detroit testify to that. A lot who never left Detroit for New York said they never had to because so many people were coming there. Many jazz greats came out of Detroit!. No doubt because the culture was so rich, that was a contributing factor. Do the same for where you live.

LJN: When were you last in London and do you have any special memories about that visit?

VR: No special memories as far as the music is concerned. I did one night there at a venue. It went well, but I never got to sink my teeth in London like I wanted over the years. Even as I continued to record and my music was being played there, Ronnie Scott’s gave me a booking once during the RCA years and bumped me for another artist. Then during one of his trips to NY, Ronnie came to The Blue Note and heard me and Kenny Burrell. That night he offered to rebook me but shortly afterwards he passed unfortunately. So this is my time and I am so looking forward.

LJN: Your latest release The Dream Is You featuring the music of Tadd Dameron has received glowing reviews. Although you are playing with a piano trio and no horns in on your upcoming visit to London, will you be performing any of the material from the album?

VR: The CD does feature a few trio pieces so I hope to cover a few and talk about Tadd and the CD some. I will have copies for sale too. What I really hope happens is that I can garner interest to bring me back with the full all-star octet and present the entire project with the instrumental overture composed by Cecil Bridgewater and a few transcriptions of Tadd’s arrangements for Carmen McRae and Billy Eckstein, which were not a part of my CD, so that the London audience can experience the entire presentation and recording live with all the great arrangements being interpreted by myself and eight of the best players in jazz today.

LJN: Can you say a few words about pianist Danny Grissett?

VR: I think of him as my little brother. We have known each other for many years now and I had the pleasure of having him as my accompanist for a short time. I can’t say just one word. Smile. He is loved, gifted, exciting, challenging, supportive, definitely inspiring, committed, in demand, generous in spirit and it is obvious through his playing that he is one of the new chosen ones to represent this art form, jazz!

LJN: In this turbulent world in which we now live do you think that music can make a difference?

VR: The music has always made a difference. Music is a healing force. It brings people together and dispenses with differences, at least for a time. It transcends all this earthly turbulence. We just need to let it do what its suppose to do.

(*) Stephen Keogh will be the drummer on Vanessa Rubin’s dates in the UK and in Spain.