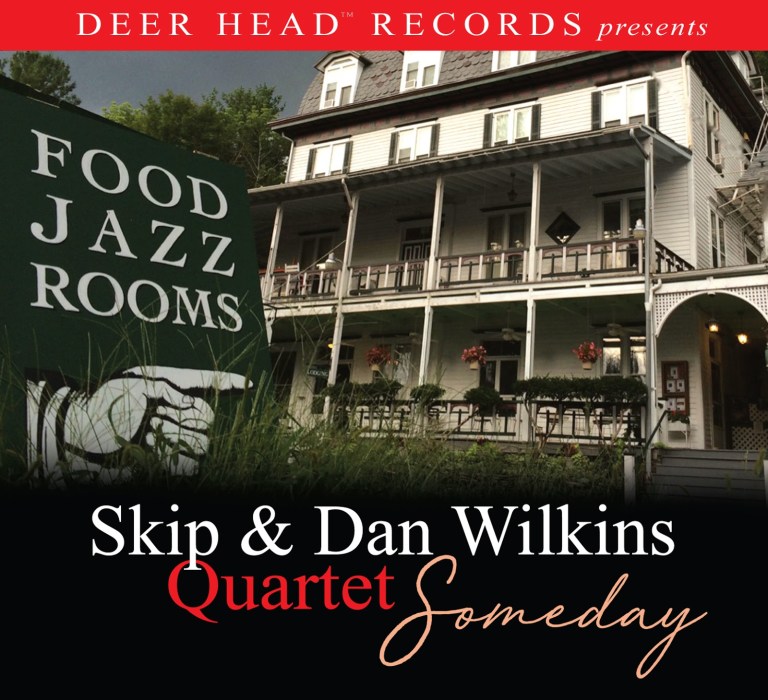 Just as this recording form the Skip and Dan Wilkins Quartet is essentially an homage to the Deer Head Inn in Delaware Water Gap, PA, my review is a kind of homage that same venue, relatively local for this writer. Yes, it’s a rather unlikely spot to find a jazz club but the Deer Head Inn is the oldest continuously running jazz club in the country, marked by its three stories, with two balconies and the subhead sign that reads, “Food -Jazz- Lodging.”

The sound of this saxophone quartet, like the ambience of the Inn, is warm and sweet as they dig into mostly overlooked standards from The Great American Songbook. Pianist Skip Wilson has lived in the upstairs apartment in the Deer Head Inn’s original carriage house since 2012 (when not spending the other six months of the year in his residence in Prague) and prior to that, the Inn served as a getaway for him and his family. The resident pianist chose drummer Gill Goodwin, a fellow resident along with his son, Dan, on tenor saxophone as well as long-time collaborator, bassist Tony Marino. Despite the close relationship among the players, this is the first time they have recorded as a unit.

Skip writes extensively in the liners about his experiences at the Inn and what it means to him and also about the genesis of this recording. “It is a special delight to work on music with my son Dan. You could say that we both have old souls. We both love the canon – the Great American Songbook. We often exchange favorite old songs as well as favorite versions. I’ve written music for Dan that we’ve recorded on previous CD releases, keeping an ear for what he does so well in writing those pieces. But, this recording proceeded differently, because Dan and I selected the music together. In my career I have been fortunate to play and record with many great saxophonists both in the U.S. and in Europe, even including two NEA Jazz Masters [Dave Liebman comes to mind]. But for some music, you just have to grow your own saxophonist.”

They played this repertoire live at the Deer Head the day before recording it in the studio with engineer Paul Wickliffe. NEA Jazz Master, the late Bob Dorough attended the Deer Head show and the recording is dedicated to him. They begin with a beautiful rendering of Parker & Charles” “We’ll Meet Again,” one of the brighter tempos in the set. Dan Wilkins shines on the melancholy Freeman/Skylar “You’ll Always Be the One I Love,” channeling the tone and feel of Dexter Gordon. He blows beautifully on the Kurt Weill & Maxwell Anderson’s ballad “It Never Was You” as well. The quartet swings with the Gershwins’ “Of Thee I Sing” and they conclude in rousing style with Cole Porter’s “Dream Dancing,” with exciting solos from the father and son team.

These tunes are ideal for a romantic or simply relaxing dinner by the fire. Close your eyes and you can practically hear the wood crackle and the faint tinkling sounds of glasses toasting as you listen. This is authentic, tried and true jazz – the kind you can expect to hear on a visit to the historic Deer Head Inn. Put it on your bucket list.