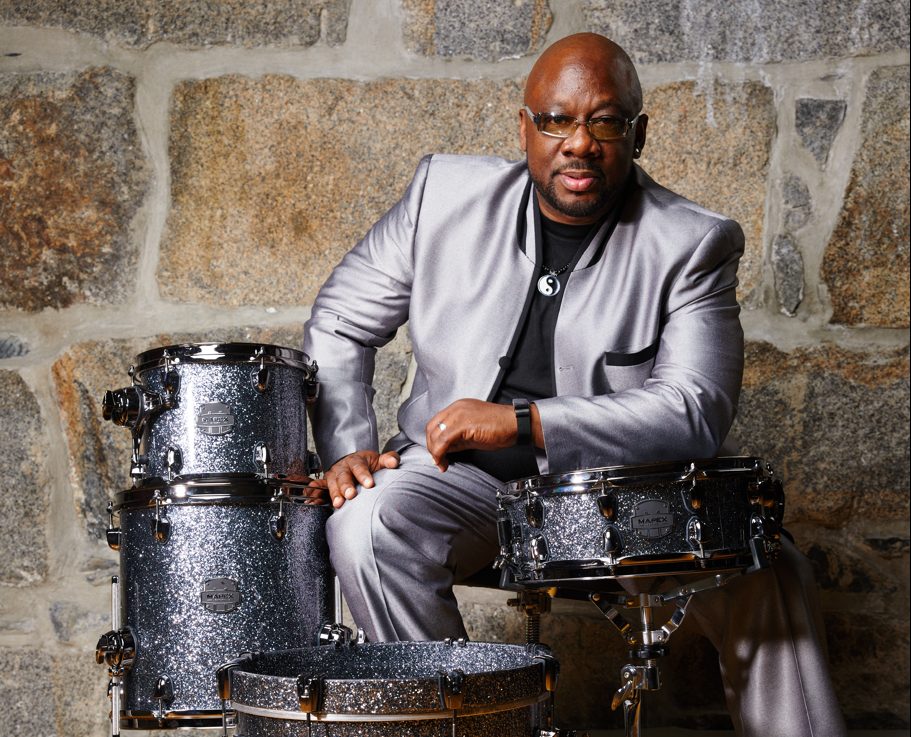 By Shaun Brady, The Philadelphia Inquirer

Ralph Peterson has been thinking a lot about legacy. That’s somewhat inevitable in jazz, where tradition and history always loom large. Last month marked the centennial anniversary of the birth of Peterson’s mentor, the iconic drummer Art Blakey.

The music composed under Blakey’s guidance by such legends as Wayne Shorter, Benny Golson, Freddie Hubbard, and others provides the repertoire for Peterson’s Messenger Legacy band, which will make its Philly debut at the Annenberg Center on Saturday.

Four years into an ongoing battle with cancer, Peterson has his own legacy to think about as well. Not that the disease seems to be slowing him down: The Messenger Legacy’s two-disc Legacy: Alive Vol. 6 at the Side Door is one of two ambitious releases from the drummer this year. The other is Listen Up!, the latest from his Gen-Next Big Band, an ensemble of up-and-coming musicians studying at Boston’s Berklee College of Music, where Peterson has been on the faculty for more than 15 years.

“Mortality focuses the mind,” Peterson said from the road, where he spends so much of his time. “Everybody dies. What matters is what people will remember about your work and what you left behind a hundred years after you were born. That’s what matters.”

Peterson refers to the status of his treatment as “a battle of containment,” saying that the cancer is currently confined to his lymph nodes. On the late October day when we spoke, he was driving to inspect renovations on a new home outside Boston and said he’d been enjoying “the reemergence of romance” following his third divorce, which coincided with his fourth round of chemotherapy.

One thing that keeps Peterson going is a commitment to repay his debt to Blakey. For nearly four decades, from the formation of the original Jazz Messengers in 1954 until Blakey’s death in 1990, the band served as a finishing school for generations of musicians, including Wynton Marsalis and Terence Blanchard. Peterson was the last drummer chosen to play alongside the master, in a two-drummer big band version of the Messengers.

The formative experience shared by all of these musicians, Peterson said, “was akin to having won a postgraduate fellowship that you actually got paid for. There are principles that were developed in the Jazz Messenger incubator that exist to lesser levels in each of our bands as individuals, but when we come together, some really special stuff happens.”

Also with the band is pianist Zaccai Curtis, who has been a sideman with three ex-Messengers: Peterson, Lynch, and saxophonist Donald Harrison. As Blakey mentored Peterson and his generation, they’re bringing along the next group.

“I have always taken the fact that Art chose me as not just an honor, but a responsibility,” Peterson said. “I’m so proud of the cats that have studied with me.

“I’d like to be around to see them become grandfathers,” he said, “but I’m not worried about the future of the music. Art always said, ‘You never see an armored car following a hearse.’ But you will see the proof of your impact live on in the music and in the way your students live their lives as musicians.”

Peterson survived a crack addiction that developed in the 1980s during his tenure with Blakey. He’s now been drug- and alcohol-free for almost 24 years. He was recently promoted to a fifth-degree black belt in tae kwon do.

“I’m living my best life,” he said. “I’m trying to do work that is meaningful today. Because if it means something today, it’ll mean something in a hundred years.”