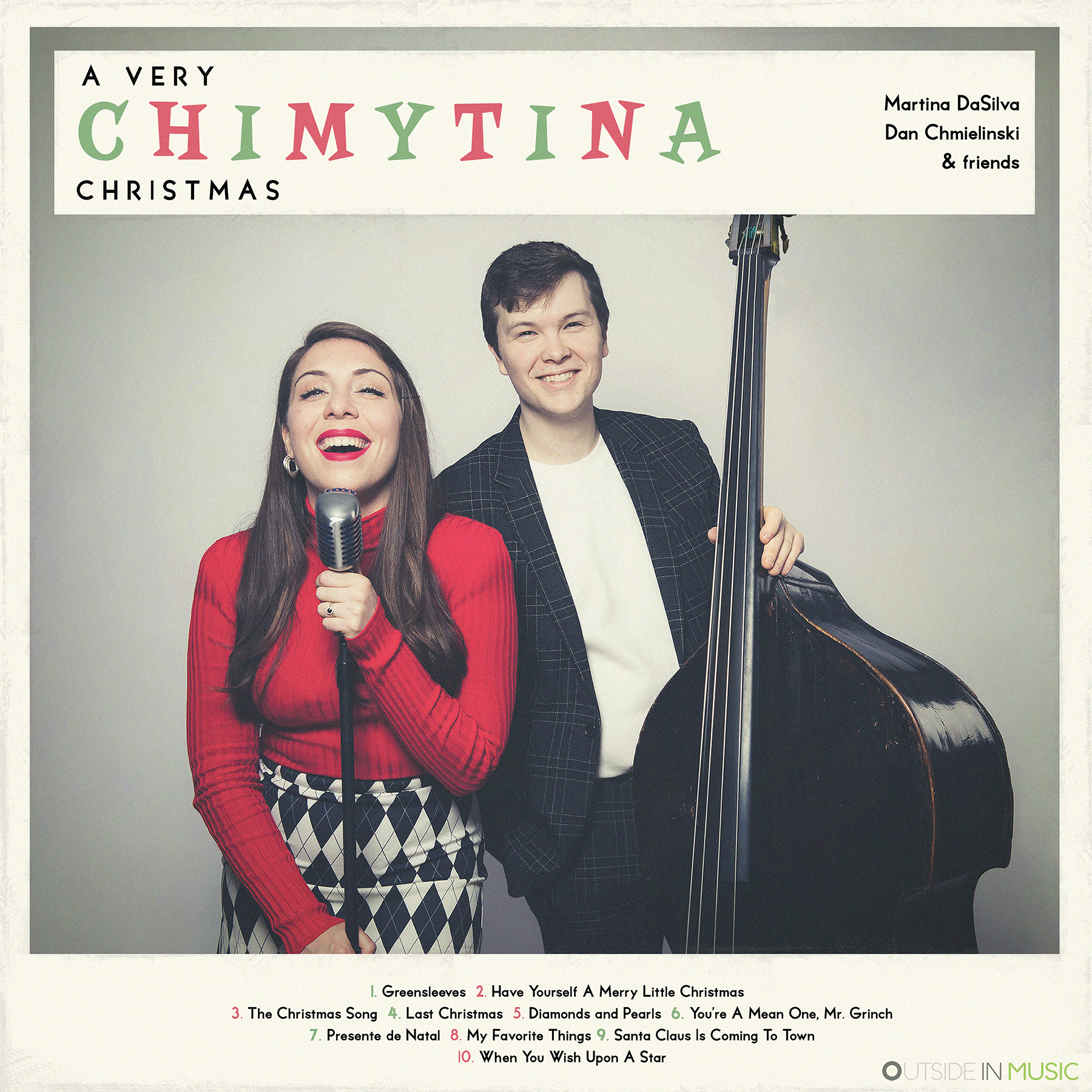 Martina DaSilva and Dan “Chimy” Chmielinski Offer Holiday Cheer with A Very ChimyTina Christmas, out December 6th on Outside in Music

On A Very ChimyTina Christmas, the duo takes on holiday classics such as “Greensleeves”, “The Christmas Song”, and the lead single and album highlight, “Last Christmas” and infuses them with their signature tight-knit and complex arranging style. Renowned saxophonist Lucas Pino lends his sound to “You’re A Mean One, Mr. Grinch” and “Have Yourself A Merry Little Christmas”, while Joel Ross compliments the duo on “My Favorite Things” and “When You Wish Upon A Star”. DaSilva showcases her Brazilian heritage on João Gilberto’s “Presente De Natal” alongside guitarist Gabe Schnider, who also makes an appearance on the original composition “Diamonds and Pearls,” while Chmielinski’s Juilliard mentor Ben Wolfe joins on a unique two-bass arrangement of “Santa Claus Is Coming To Town”. A Very ChimyTina Christmas is not just any old Christmas album – it’s an innovative musical exploration that truly reinvigorates the holiday music genre.

While A Very ChimyTina Christmas is the pair’s formal recorded debut, Martina DaSilva and Dan “Chimy” Chmielinski have been making music together for half a decade. Their musical collaboration began in 2014 and eventually blossomed into a semi-regular video series. Known as ChimyTina, the duo became viral sensations for their bass-vocal renditions of classic standards such as “The Best Things In Life Are Free”, “When I Grow Too Old To Dream”, and, tellingly, “Have Yourself A Merry Little Christmas”, among others. The demand for more music grew and thus, A Very ChimyTina Christmas was born.

New York native Martina DaSilva has been captivating audiences with her signature blend of daring technical virtuosity and expressive emotional sensitivity since she burst on the scene.  Drawing equally from the styles of early jazz, opera, and chamber music, her musicality transcends conventional genre labelling. As a Brazilian-American, Martina also has a passion for performing the works of Brazilian composers. She is perhaps best known as the leader of the jazz vocal harmony group The Ladybugs. Known for its unique instrumentation of two lead singers, two trombonists, guitar and bass, The Ladybugs has performed across the country and received high praise and attention from the likes of Will Friedwald of the Wall Street Journal, Vanity Fair, the New York City Jazz Record and NPR. In addition to The Ladybugs, DaSilva leads her own group and has performed at the Kennedy Center, the Bern International Jazz Festival,  the Blue Note Jazz Festival, the NYC Hot Jazz Festival, Jazz At Lincoln Center’s Generations in Jazz Festival, and the NY Winter Jazzfest.

Dan “Chimy” Chmielinski is one of the most in-demand bassists in New York City. At just 25 years of age, the bassist/producer/bandleader/composer has worked and toured with an impressive list of jazz luminaries including Wynton Marsalis, Marc Cary, Brad Mehldau, and Joey Alexander, among many others. Chmielinski founded and leads several groups of his own, including “Four by Four,” an octet innovatively showcasing jazz quartet alongside string quartet, and “Circuit Kisser,” an electronic ensemble consisting of five synthesizers, electric bass and drums, combining jazz harmonies and electronic music; both showcasing Dan’s original compositions. A Juilliard graduate, Chmielinski has played in 14 different countries and has collaborated with country music sensation Kelsea Ballerini on national television, accompanied the stars of Broadway’s “Hamilton”, performed with Fall Out Boy’s Patrick Stump and recorded on the soundtrack for Woody Allen’s “Cafe Society”. He is a prolific composer having scored his first film (“Smoke In The Air”) in 2012 and countless short films, documentaries and feature films since then.

A Very ChimyTina Christmas brings together the rich and diverse backgrounds of these two musical prodigies. The end result is a warm holiday offering that not only inspires Christmas cheer, but showcases the stunning result when two virtuosic musicians join forces.