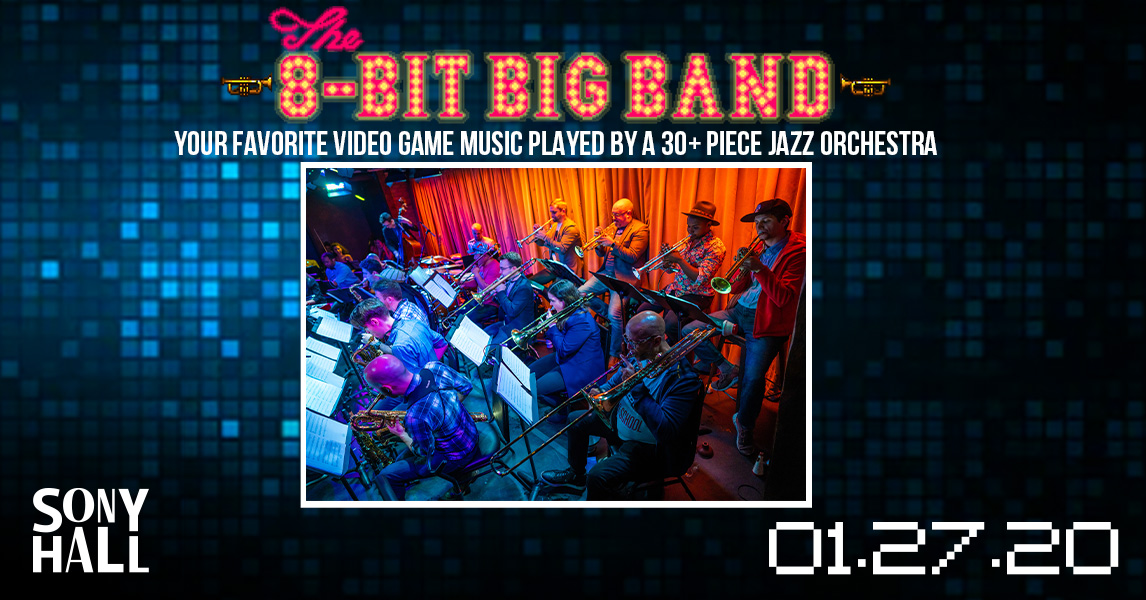 Charlie Rosen, the 29-year old multi-talented bandleader, Broadway and television composer, and mega multi-instrumentalist, is bringing the acclaimed 8-Bit Big Band to Sony Hall in New York City! On Monday, January 27th, this 33-person jazz/pops big band will present Rosen’s original “big band” arrangements of some of the world’s most popular video game music. Musical prodigy Grace Kelly will be featured as a guest soloist, as well as world-class bassist Adam Neely and viral video game music sensation and saxophonist Carlos Eiene aka InsaneInTheRain.  Doors open at 6pm and the show starts at 8pm. Tickets start at $39 and will be going on sale on Wednesday, November 13 here.

The 8-Bit Big Band made their New York City debut in May 2019 at Subculture. Following this sold out show, the band made its way to Boston, where it filled the 1200-seat Berklee Performance Center. Now, Rosen and his big band are thrilled to return to New York City. This  high-energy, multimedia event will celebrate the breadth and richness of music from globally sensational video game franchises like Super Mario Brothers, the Legend of Zelda, Final Fantasy, Pokemon, and more.

In the two years since its inception, the 8-Big Band has become a viral sensation. Their fully produced music videos, regularly uploaded to their YouTube channel, rack up tens to hundreds of thousands of views. Currently, the channel boasts over 60,000 subscribers and has garnered over 2M cumulative views in the past year. In May of 2018, the 8-Bit Big Band released its first album, Press Start!, which features the music of the Super Mario series, the Legend of Zelda series, Ganbare Goemon, F-Zero, and Final Fantasy. In June 2019, the band released its second album Choose Your Character, which includes music from Donkey Kong Country, Duck Tales, Sonic The Hedgehog, Pokemon, Portal and more from Super Mario Series, The Legend of Zelda and Tetris.

“As a lifelong gamer who also grew up listening to the best in orchestral and big band music, I see the music of many video games as musically equivalent to other great works of music set to media such as film scores and broadway shows. Many carry the same quality of melody and composition when it comes to quality, scope, and emotional appeal for audiences. The crowd reaction when we play our versions of themes from favroites such as Mario, Tetris, and Legend of Zelda is overwhelming, not just because it’s amazing music on its own, but also because of the strong memories and nostalgia evoked in an audience that played these games throughout childhood. I truly believe that video game music deserves to be included in a ‘New American Songbook,’ just like classic film and Broadway music has been canonized by the Golden Age American Songbook,” Rosen says. “I’m extremely excited to bring the 8-Bit Big Band to Sony Hall and help New York-area video game fans relive the joy of their favorite games in a whole new way.”

The 8-Bit Big Band is a 33-member jazz/pops orchestra formed by Charlie Rosen to celebrate and realize some of the best musical themes of various video games from a multitude of consoles and eras. The members of the 8-Bit Big Band come from all around the world, with most residing primarily in New York City, and are some of the most highly sought-after musicians and performers internationally. Many are all gamers at heart who enjoy playing many of the titles whose music they performed.

Tickets for the January 27th performance at Sony Hall are on sale as of November 13for $39. On December 11th, the ticket price will rise to $49 and on January 1st, $59. There are a limited number of VIP tickets available for $79, which include premium seating and an album download card. A very limited number of Deluxe VIP tickets (which includes a meet and greet and merch), are available for $150 as are Superstar VIP tickets for $250, which include all the aforementioned benefits plus special access to an upcoming 8 Bit Big Band recording session on November 30th (must buy by November 26th).