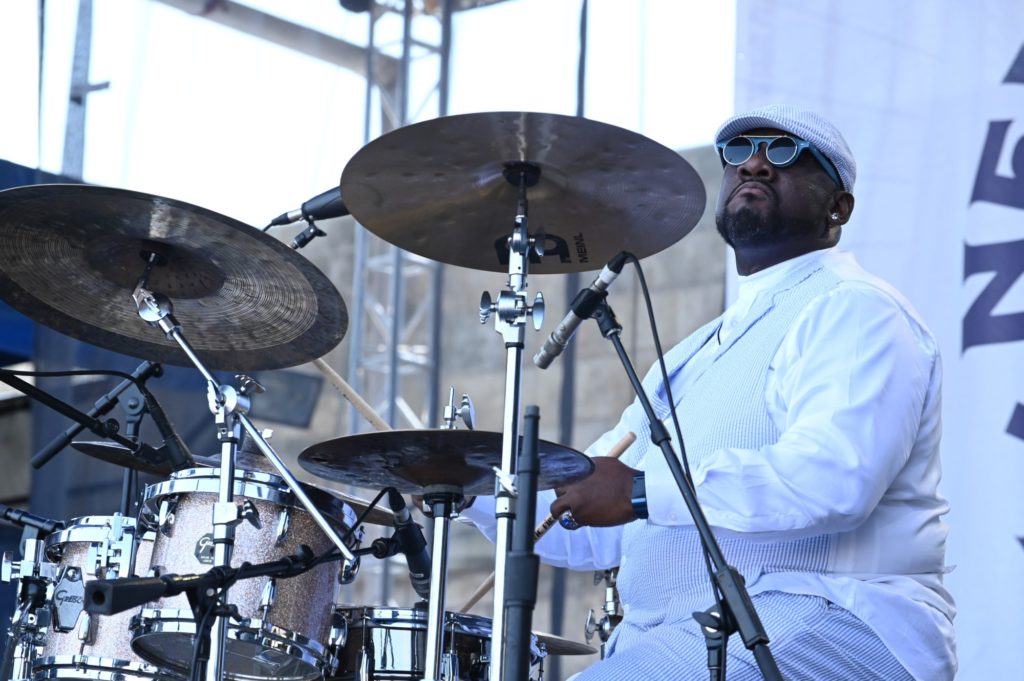 Newport 2019 reflected the same openhearted creative force that defined Fred Taylor’s indomitable spirit and love for all music. On Saturday August 3rd, the festival began with a roar, as another local Boston hero – drummer, composer and Berklee College of Music faculty member Ralph Peterson- presented his Messenger Legacy Band at Newport’s Fort Stage. With an opening command to the gathered crowd to “put your tables in their upright position; fasten your seatbelts – we’ll do the smoking!”- Peterson and his crew launched into a rollicking tribute to the musical genius of Art Blakey, (whose centennial is being celebrated this year), and who was an inspiring mentor to Peterson as a drummer in one of Blakey’s stellar bands.

Right from takeoff, this merry band at Newport embarked on a careening, colorful journey. The opening number was highlighted by trumpeter Brian Lynch’s bristling solo in which he hit hot notes on his horn, (like crackling firecrackers), and then slurred and tongued his way down to dancing, soulful depths.

On several of the band’s other grooving numbers, Robin Eubank’s pungent trombone, Essoet Essoet’s agile bass and Bill Pierce’s warm sax weaved deep into the group’s collective passion, highlighted by Pierce’s twisting solos on the tune, “A La Mode”, a ballad both graceful and plucky (cushioned in pianist Zaccai Curtis’ twinkling runs). A driving Afro-Cuban piece concluded the set, crowned by a drum solo by the dynamic Peterson who first erupted with a blaze of wood rim hits and then moved into a ferocious roll of low tom and bass drum, thundering into the open air of Newport like a locomotive careening joyfully down its tracks.

In the spirit of Fred Taylor’s own inspiring mentorship of young talent through out his career, Peterson is also leading the charge to give young artists a stage to perform. A nice example of this is Peterson’s new studio recording, Listen Up! [Onyx Productions] with his Gen-Next Big Band. Gen-Next is an ensemble composed of young Berklee musicians under Peterson’s tutelage, who bring a wellspring of talent and potency to their playing. The recording is chock full of grooving, plucky big band delights that include Freddie Hubbard’s “Down Under” (with pumping solos from trombones and trumpets); Wayne Shorter’s “This is For Albert” (with smart soloing from the band’s brass and swinging woodwind sections) and Hoagy Carmichael’s glowing ballad, “Skylark,” with pliant vocals from Chloe Brisson cushioned in artful backing from sax and trombone players. The young recording team at Power Station/Berklee NYC has done a fine job capturing this big band in all their youthful, brimming glory on this new recording.