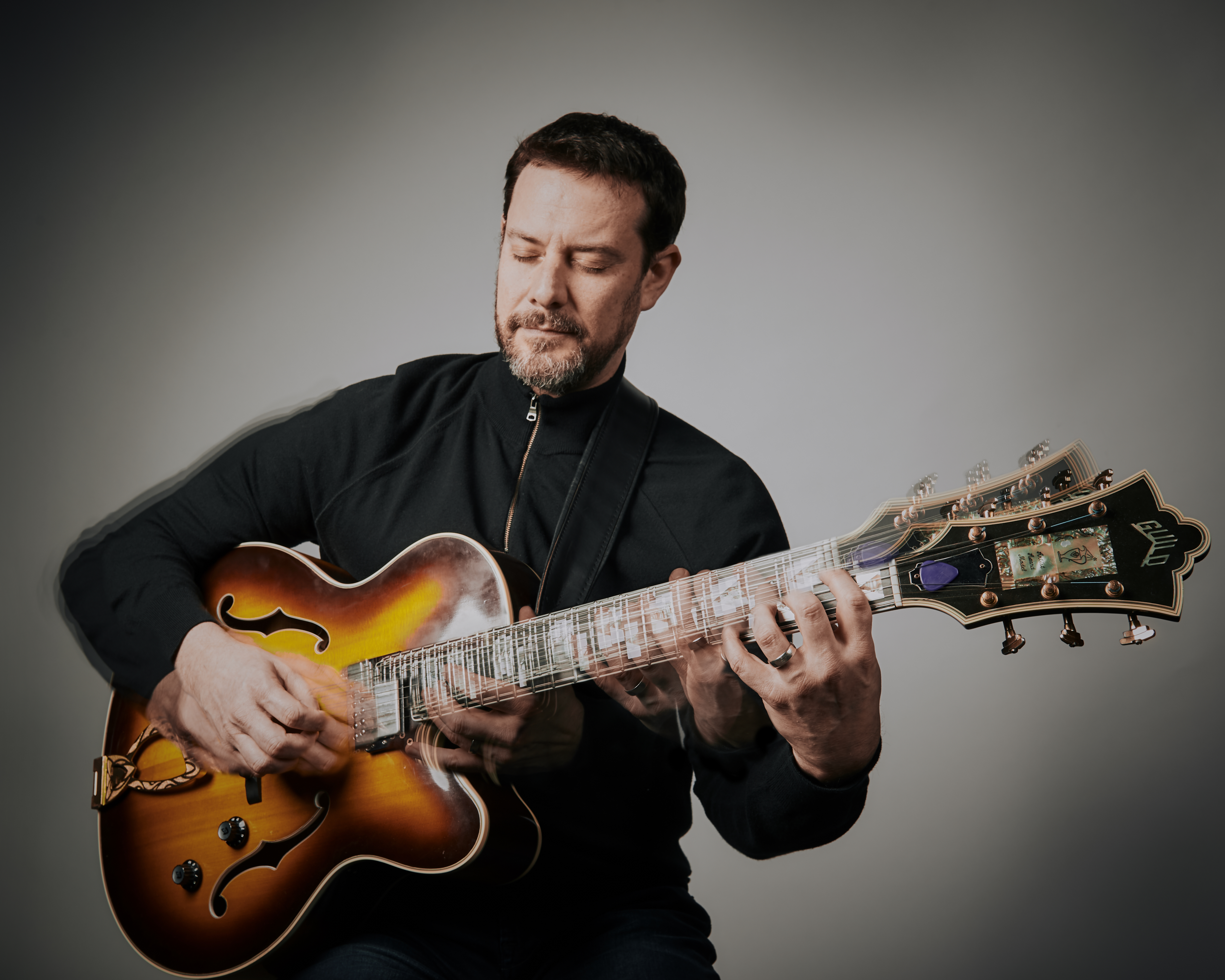 Issued on Eric Hofbauer’s Creative Nation Music, Remains of Echoes finds the guitarist partnering with drummer Dylan Jack for an album of covers, the album title taken from a line in Jimi Hendrix’s “Up From the Skies,” “Is it just remains of vibrations and echoes long ago?” Most assuredly, the pieces the Boston-based duo selected are ones that resonated across the years and therefore qualify as echoes of a deeply personal kind. But the performances aren’t merely sentimental journeys: they’re statements that very clearly capture who these players are now, even if the material covered profoundly influenced their respective developments as players and persons. As selections go, the set-list isn’t without surprises: yes, tunes by Ellington, Parker, Davis, Cherry, Ornette, Monk, and Mingus appear but so too do others by Jackson Browne, The Police, and Hendrix.

Hofbauer’s distinguished himself with a discography of solo, trio, and quartet recordings, as well as ones in his marvelous Prehistoric Jazz series. His range extends from blues and bebop to classical and Tin Pan Alley, and his appetite for adventurous music-making is voracious. As a guitarist, he’s less a gunslinger than an explorer who brings a fine-tuned analytical sensibility to whatever projects he undertakes. Jack has similarly established himself as a vital figure within the Boston music scene and as someone receptive to innovative ideas. He fronts the Dylan Jack Quartet, which, in fact, includes Hofbauer and is scheduled to issue its second disc, The Tale of the Twelve-Foot Man, early next year on Creative Nation Music.

Remains of Echoes, however, is a duo outing, full stop. The absence of a bassist has ramifications that go beyond arithmetical subtraction. Its omission opens up greater space for the guitarist and drummer and allows for a looser, explorative feel to guide their approach; with bass excluded, Jack even tuned bass drums and floor toms in certain tracks to align pitches to melodies in the originals. It’s telling that Hofbauer characterizes the album (quoted in David Adler’s liner notes) as “two solo albums in one,” the implication being that each musician played perhaps even more expansively than usual in these performances.

A live feel naturally permeates them, the duo hewing enough to the originals to render them recognizable yet distancing themselves from them with playing that never feels overly tethered. A case in point, Ellington’s “African Flower” receives a fresh reading when the guitarist’s close melodic rendering is conjoined to a panoply of textural embellishments by Jack. In a neat trick, Hofbauer articulates the tune’s melodies in a higher register and its bass part in a lower, something he also does during a fleet, bop-inflected reading of Ornette Coleman’s “Word From Bird.” Hofbauer executes the head in Parker’s bop classic “Klactoveedsedstene” pretty much straight and the duo also indulges in moments of traditional swing, but, like the album in general, the two never let themselves be too roped in by the original’s compositional framework.

Without wishing to read too much into it, the choice of The Police’s “Walking on the Moon” as the album opener could be interpreted as a Statement of Intent, as if the duo wanted to emphasize from the start that the set aspires to be more than an affectionate collection of jazz homages. Regardless, it’s easy to imagine Hofbauer and Jack during their formative years being captivated, as so many others were, by the playing of Andy Summers and Stewart Copeland. With Jack’s drums tuned to Sting’s bass notes on the original, the cover plays like a looser and jazzier riff on it, with Hofbauer voicing the vocal and Jack sometimes evoking the dub-inflected quality of the song.

For a funky take on Don Cherry’s “Mopti,” Jack expanded on his kit with chains, rattles, and a splash cymbal, resulting in a presentation that suggests the World music sensibility of the pocket trumpeter. In this stomping version, Hofbauer voices an African rhythm, ostensibly converting the guitar into a kalimba, after which an unaccompanied Jack becomes a one-man percussion ensemble. A swampy treatment of “Up From the Skies” distinguishes itself from the rest by combining brushes and cymbal flourishes with raw slide playing, whereas the album’s single solo performance, “These Days,” one of Browne’s first-ever compositions (written when he was a teenager and first made famous by Nico), likewise stands out for the guitarist’s use of slide.

Capping the album is a free-floating treatment of Miles Davis’s “Nardis,” which pianist Bill Evans popularized and which in the duo’s hands retains the understated elegance and intensity of the original; inspired reimaginings of Monk’s “Let’s Call This” and Mingus’s “Fables of Faubus” also appear. Had Hofbauer and Jack been in the market for another album title, a suitable candidate might have been Deconstructions & Reconstructions, given how thoroughly the pair reduce all ten of these originals to their architectural skeletons before building them back up again.