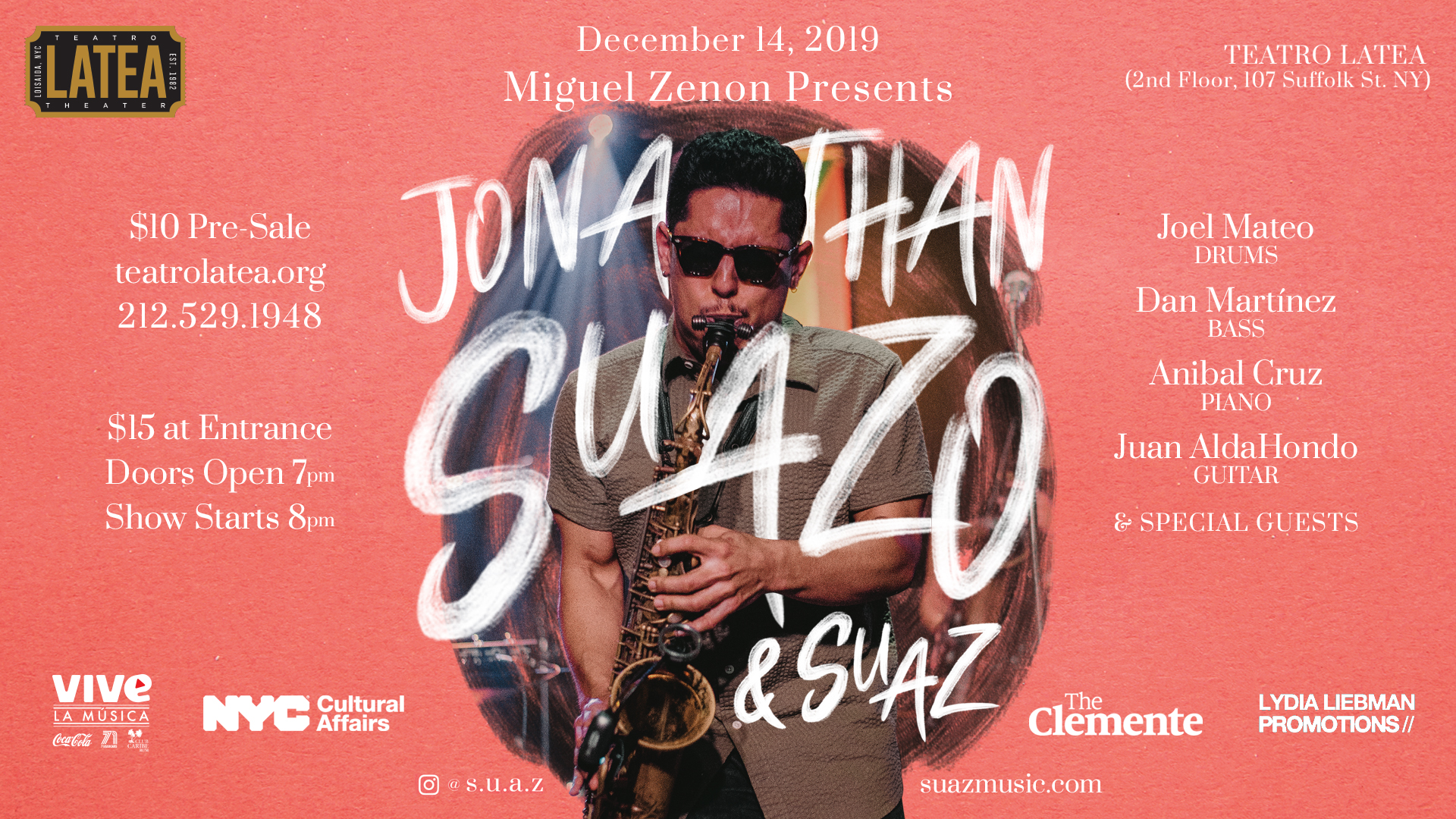 Multiple GRAMMY® Nominee and Guggenheim and MacArthur Fellow Miguel Zenón is proud to present Jazz at Teatro LATEA, located at 107 Suffolk St in New York City on December 14th at 8pm. Doors open at 7pm. Curated and conceived by Zenón, this series takes place at LATEA (Latin American Theatre Experiment Associates), a New York City performing arts theater company that has been a Latino cultural staple for over 30 years. The jazz series is presented quarterly at LATEA’s theater, totaling 4 performances by 4 different ensembles over the year.  The next event in this series will feature saxophonist/composer Jonathan Suazo & Suaz, alongside Joel Mateo on drums, Dan Martinez on bass, Anibal Cruz on piano and Juan AndaHondo on guitar.  Tickets are available for pre-sale here for $10 and are $15 at the door. This follows this November 30th Jazz at LATEA performance with Slavo Rican Assembly.

Featured performer Jonathan Suazo will offer a set of original compositions from his past albums as well as fresh unreleased material. Suazo’s new single “Each Other” drops on November 3rd, 2019. The Latin Grammy® award winning sideman (ILE) and saxophonist describes this composition as being about helping each other grow and being there for one another in good and bad times. Suazo cites the growing suicide rates in Puerto Rico and the important cultural shift in recognizing the importance of mental health as his prime reasons for releasing this material. Additionally, the saxophonist will be recording some new material in November based on research he conducted at the Berklee Global Jazz Institute, from which he graduated from in 2017 (M.M. Contemporary Performance). The music will feature elements of Afro Dominican music and Jazz.  This new record will be recorded following a star performance at the Dominican Republic Jazz Festival, where Suazo will be performing alongside renowned pianist Josean Jacobo.

LATEA is proud to continue its tradition of presenting the finest up-and-coming names in latin jazz.  This tradition began in 2017 with Gabriel Vicens septet as the house band which included such luminaries as Keria Harman, Luis Perdomo, Ramon Feliu, Ricky Rodriguez, EJ Strickland and Obanilu. In addition, such artists as Mario Castro and Joel Mateo have been a part of the series.  All performers/ensembles are handpicked by Zenón with an eye towards supporting emerging artists to achieve visibility. About the series, Zenon stated during a recent interview: “I love what they’re doing at LATEA, opening the door to these young jazz musicians. Any artist will tell you that the road is difficult, so having someone there offering a helping hand could be crucial to your development. I’m just glad to be in the position to help out some of my colleagues.”

Through multicultural and multidisciplinary initiatives at The Clemente Center, which LATEA helped establish, the organization assiduously promotes Latino performing arts to multicultural audiences.  At the theater, New York based Latino / Latin American artists can create multidisciplinary work through co-productions in a collaborative environment. The theater’s principal aim is not only to expose underserved Latino audiences to dynamic multidisciplinary performance/theater experiences but also to introduce broader audiences to work by emerging Latino/Latin American and other artists.

Born and raised in Puerto Rico, series curator Miguel Zenón has released twelve critically acclaimed recordings as a bandleader and has collaborated with some of the great Jazz luminaries of today. Zenón has given hundreds of lectures and master classes at institutions all over the world and was selected as the Alto Saxophonist of the Year by the Jazz Journalist Association in 2015, 2018 and 2019. As a composer he has been commissioned by such institutions as SFJAZZ, The New York State Council for the Arts, Chamber Music America, NYO JAZZ , The Logan Center for The Arts, The Hyde Park Jazz Festival, The John Simon Guggenheim Foundation, MIT, Jazz Reach, Peak Performances, PRISM Quartet among others.  Additionally, Zenón has collaborated with such esteemed artists as Charlie Haden, Fred Hersch, Kenny Werner, David Sánchez, Danilo Pérez, The Mingus Big Band, Bobby Hutcherson and Steve Coleman.