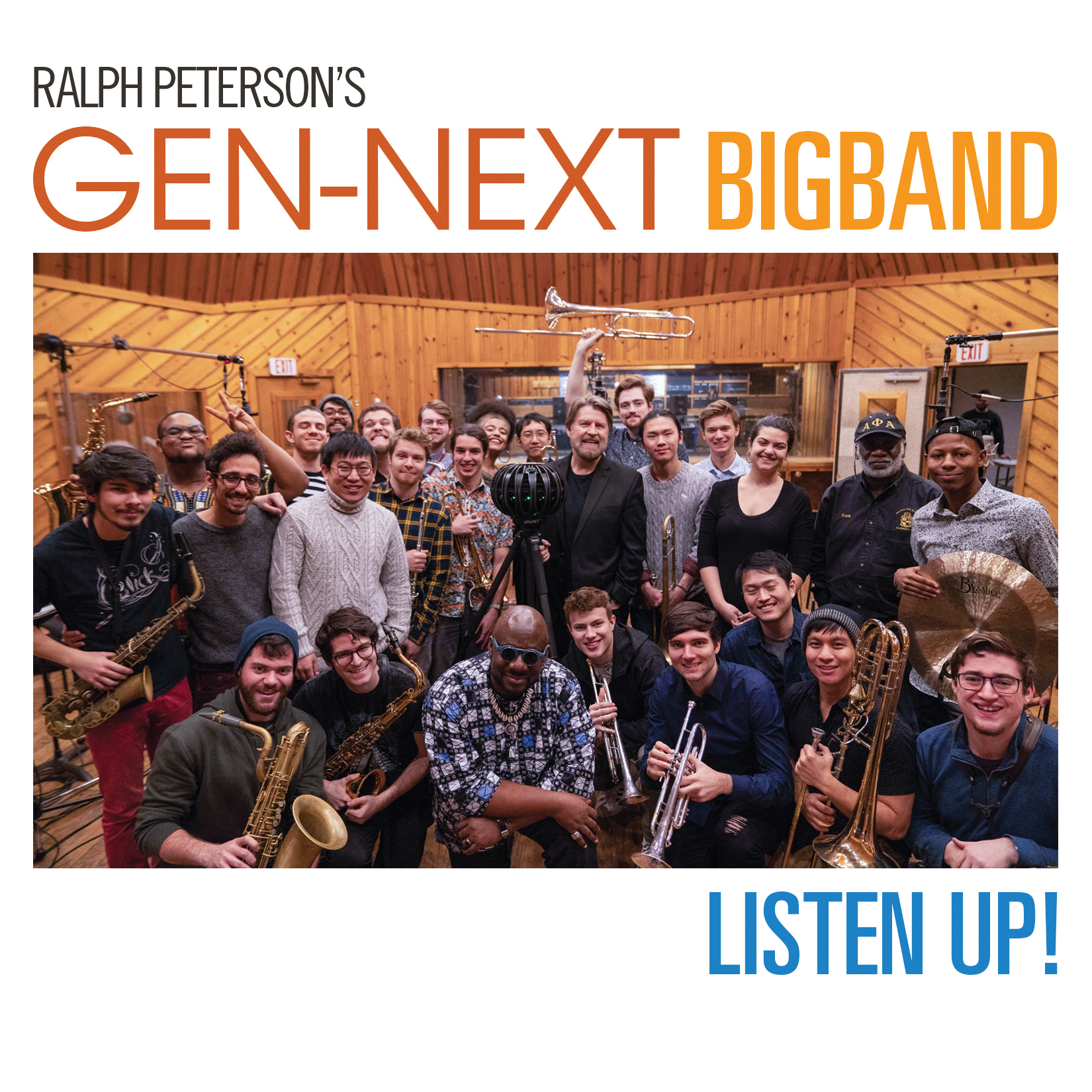 Ralph Peterson Passes the Torch with the Gen-Next Big Band; New Album Listen Up! Due out November 12th on Onyx Productions

Onyx Productions, the music label founded and spearheaded by iconic drummer, bandleader and Berklee professor Ralph Peterson Jr., is proud to announce the November 12th release of Listen Up!, the second album from Peterson’s Gen-Next Big Band.  Following in the Jazz Messenger tradition of mentorship, the Gen-Next Big Band features an exciting lineup of some of Berklee College of Music’s brightest young musicians and employs Blakey’s signature two-drummer format.  These young Berklee students are granted the opportunity to work alongside Peterson and special guest trombonist Kuumba Frank Lacy, two Jazz Messenger alumni. The Gen-Next Big Band will celebrate the pre-release of Listen Up! this Monday, October 7th, at Dizzy’s Club at Jazz at Lincoln Center in New York City.

Listen Up! showcases the excellence of this group of young Berklee players under the tutelage of consummate drummer Ralph Peterson, while celebrating the life and music of the legendary Art Blakey.  As Peterson remarks, “…all of the arranging, with the exception of “The Art of War” and “In Case You Missed It”  was done by Berklee students. They demonstrate maturity, finesse, and exuberance as arrangers.” The album embodies the spirit of the Jazz Messengers, embracing the didactic nature of Blakey’s legendary institution as a means of bringing fresh enthusiasm to the music, and perpetuating the artform.  “Back in 1983,” as Peterson recollects, “Art Blakey called me to perform with the Jazz Messengers at the Boston Globe Jazz Festival. That concert was transformative in my life and now I have the opportunity to come full circle and extend that experience to these young musicians here.”

The album begins with a bang as the musicians blaze through a spirited arrangement of the Curtis Fuller composition “Arabia”, which debuted on 1961’s Mosaic.  From the first downbeat, one notices the precision of the ensemble. As the piece unfolds, the stunning interplay and impressive dynamic capabilities of the group become apparent; and at once, you’re transported back to Blakey’s classic sound.

Prof. Peterson blows some soulful muted cornet at the end of the piece as well.

The second track, “Acceptance”, is one of two original compositions composed  by bandleader Ralph Peterson which are featured on this release. This ostinato-driven post-bop conception features transcendent solos by trumpeter Robert Vega Dowda, Flutist Joe Melnicove and bandleader Ralph Peterson.  The band is in full swing on Bobby Watson’s “In Case You Missed It”, trading incendiary solos across the bandstand. The track features a beautiful lyrical solo by messenger Kuumba Frank Lacy and also features Peterson abandoning his drum set for a 2nd foray onto the cornet,trading with trumpeter John Michael Bradford. The album concludes with another Peterson original entitled “The Art of War”.  This driving post-bop composition was arranged by Todd Bayshore and features spirited drum solo trades between Peterson and student Christian Napoleon, a celebration of the dual-drummer instrumentation that makes this release so special, harkening back to a time when Peterson found himself trading solos with Blakey himself.

More about the bandleader:

Peterson is also grateful and proud of the manner in which he has prevailed over physical and personal difficulties. He has lived his life “drink and drug-free” for more than 23 years now. He has survived colon cancer and Bell’s Palsy in addition to multiple orthopedic challenges. He is an avid martial artist recently promoted to 5th Dan Black Belt.

In 2010, Peterson founded Onyx Productions Music Label and has released his own music on the label ever since. This project is his 10th on his label and 24th as a leader.