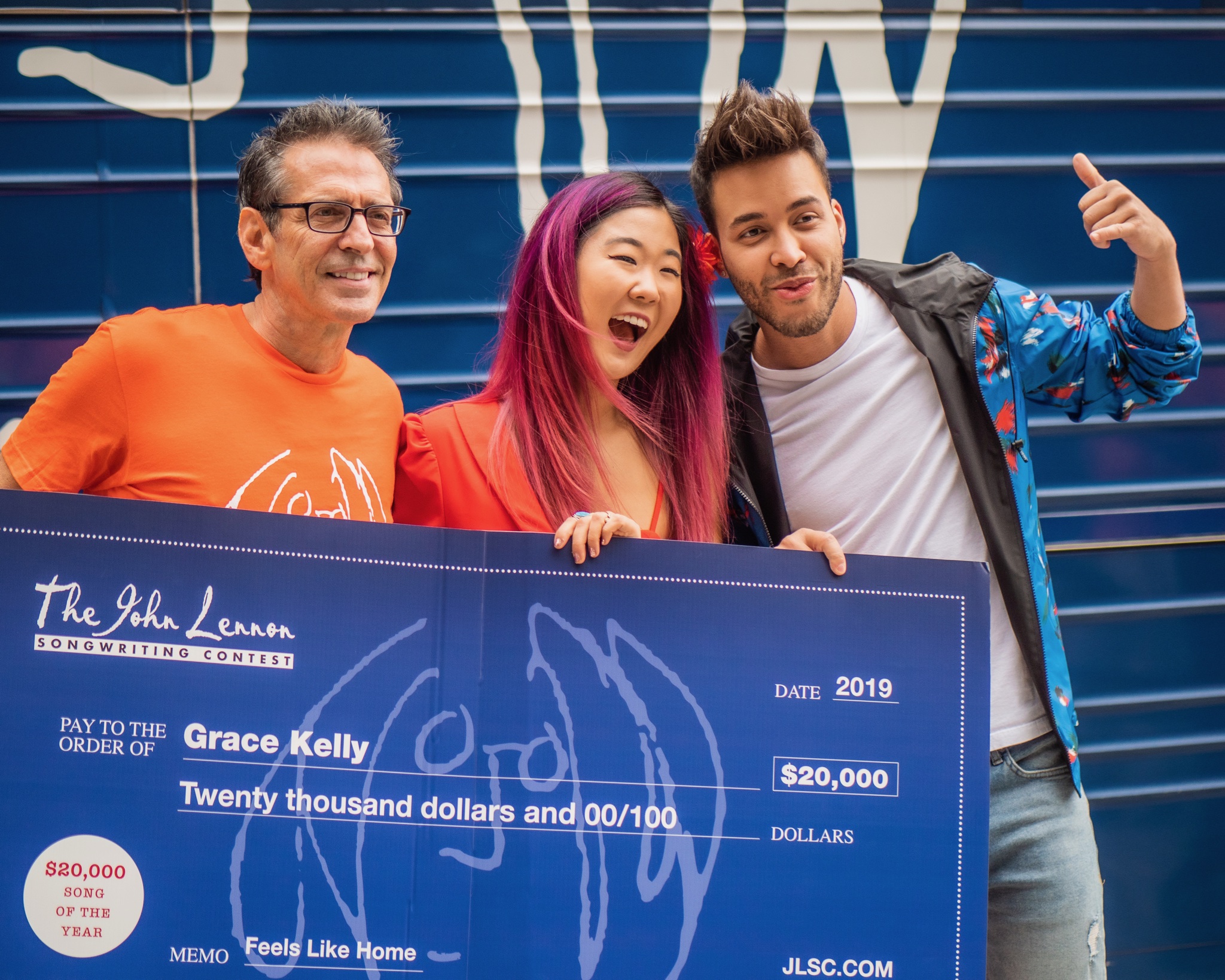 NEW YORK, New York, September 16, 2019 –Millennial musical phenom Grace Kelly was awarded $20,000 for winning the John Lennon Songwriting Contest ‘Song of the Year’ for her original song “Feels Like Home” today at New York City Hall. Kelly was presented with the award as part of the 6th annual Come Together NYC Tour in partnership with the Mayor’s Office, City Council, and Department of Cultural Affairs. After Grace was presented with the award by Grammy nominated recording artist Prince Royce, she performed at the podium a moving a capella rendition of the Lennon classic “Imagine”. Among the participants were Brian Rothschild, Co-Founder/Executive Director, The John Lennon Educational Tour Bus and The John Lennon Songwriting Contest; world famous rock photographer Bob Gruen; Erica Ford of Peace Is A Lifestyle; and student activists Kadija Kone, Christopher Underwood and Matthew Diaz. New York City Council members Daniel Dromm, Mark Treygar and Alicka Ampry-Samuel were also in attendance.

Says Kelly of this great honor: “I am deeply grateful and honored to be presented this award. My biggest thank you to the JLSC for this opportunity.  This award has made me even more committed to my songwriting and mission of building deep beautiful connection to all other beings through songwriting and performance! I listened and played a lot of Beatles Music growing up. If I were to go back in time and tell 10 year old Grace about future me winning this award she simply wouldn’t have believed me! Dreams really do come true!”Kelly is no stranger to the spotlight. Since the release of her debut album Dreaming in 2005, the vocalist, songwriter, saxophonist and bandleader has evolved from a musical child prodigy to a full fledged cultural phenomenon who is taking the world by storm. She has been featured by CNN.com, Glamour and Vanity Fair as a ‘Millennial Shaking up the Jazz World’, Kelly’s state-of-the-art brand of electro jazz-pop and inventive digital content are pushing her to the forefront of the fusion scene, alongside names like Esperanza Spalding, Kamasi Washington, Jacob Collier, Jon Batiste, Snarky Puppy, and Too Many Zooz. Since performing at Barack Obama’s inauguration, Kelly has played over 900 shows as a bandleader in 35 countries around the world. Touted for her scorching saxophone stylings and purring vocals, Kelly has performed and recorded with renowned artists including Lin Manuel-Miranda, Dave Brubeck, Phil Woods, Huey Lewis, Harry Connick Jr., Gloria Estefan, Questlove, and Wynton Marsalis. To date, Kelly has released 13 acclaimed albums and boasts a resume that includes performing at the Hollywood Bowl and as part of the house band for “The Late Show with Stephen Colbert” – all before reaching her mid-twenties.

Kelly’s career entered a new phase with the 2018 release of GO TiME: Brooklyn; the innovative video album from which “Feels Like Home” first appeared. The gorgeous music video features Kelly and Thirdstory’s Elliott Skinner in a soulful acoustic duet. Out of thousands of submissions from across the world, “Feels Like Home” was initially selected as the Grand Prize winner for the Country genre before taking the top prize.

Kelly looks forward to sharing her musical talents with the world this fall. She will be performing with her band at (le) Poisson Rouge in New York City on September 19th and on October 22, she will take part in the NY Imagine Party Brooklyn Bowl.

The John Lennon Songwriting Contest (JLSC) is the preeminent international competition open to amateur and professional songwriters. It was founded in 1997 in collaboration with Yoko Ono Lennon. As ‘Song of the Year’ winner, Grace won $20,000 in cash in addition to prizes from OWC (Other World Computing), Audio-Technica, Yamaha, Neutrik, Genelec, Disc Makers, Focusrite and more. She has also received other prizes throughout the year after winning both the Lennon Awards and the Grand Prize packages in the Country category. The song was selected to win the top prize by the John Lennon Songwriting Contest Executive Committee of Judges, consisting of legendary and contemporary superstars such as Taylor Momsen, George Clinton, Prince Royce, Matthew Koma, American Authors, Switchfoot, Bootsy Collins, Kevin Bacon & more.