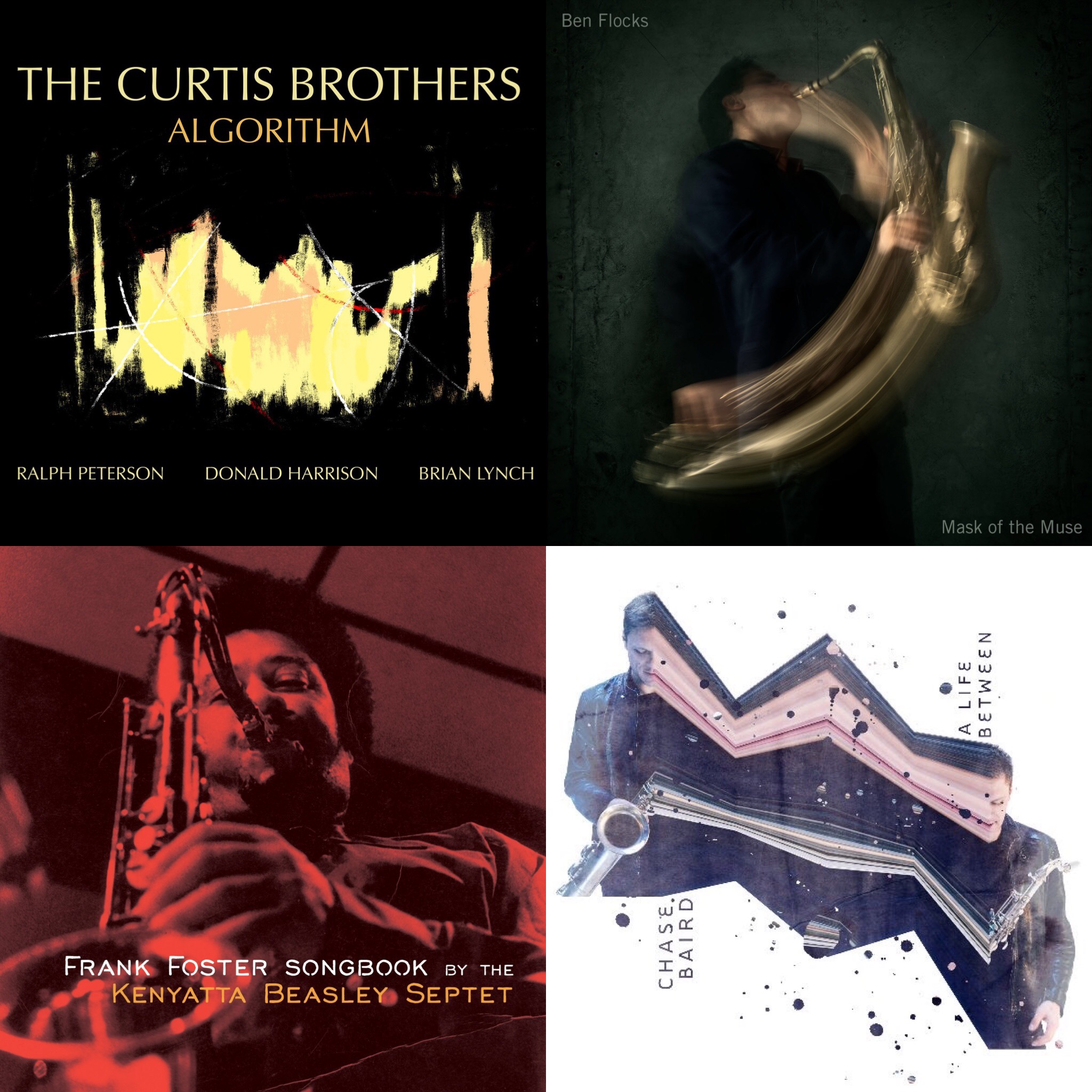 Chase Baird, A Life Between (Soundsabound)

Saxophonist Chase Baird has lately been a member of drummer Antonio Sanchez’s Migration band, and on this album, the leadership torch has been passed. The group also includes Nir Felder on guitar, Brad Mehldau on piano, and Dan Chmielinski on bass. The music they make together combines a lot of elements, including classical/chamber elegance, hard rock crunch, and post-bop sophistication. Baird’s own playing has bite; he gets hold of short phrases and won’t let them go, and he likes to let his lines end with hoarse cries. The opening track, “Ripcord,” is built around heavy piano chords and a driving backbeat, anchored by distorted guitar from Felder; it reminds me of the work of Aaron Parks, and that’s a sound I’m always happy to hear.

Pianist Zaccai Curtis and his bassist brother Luques have played with many prominent jazz musicians, including trumpeters Christian Scott, David Weiss and Sean Jones, and pianist Orrin Evans. Though they maintain separate careers, they also work together as the Curtis Brothers. This is their third album, following 2012’s Completion Of Proof and 2017’s Syzygy. The band is the same as on their debut: Brian Lynch on trumpet, Donald Harrison on alto saxophone, and Ralph Peterson on drums. The opening track, “Three Points And A Sphere,” sets the tone — it’s a blowout reminiscent of Art Blakey’s Jazz Messengers, with just a little extra complexity to show that it’s 2019, not 1960. Peterson drives the ensemble hard, and the horns’ solos are fierce and high-energy, and the brothers are the axle around which the whole thing spins.

Tenor saxophonist Frank Foster isn’t that well known in the broader world, but he led the Count Basie band after Basie’s death, and wrote a sheaf of compositions performed by that group and his own ensembles. Trumpeter Kenyatta Beasley had originally set out to help Foster write a jazz arranging textbook, but Foster’s health didn’t allow for that, so instead he decided to record an album of the older man’s compositions. He put together a band featuring Keith Loftis on tenor and soprano saxes, Mark Gross on alto sax, Vincent Gardner on trombone, Anthony Wonsey on piano, Dezron Douglas on bass, and Alvester Garnett on drums. The album was recorded live in 2013, but not released until now. On two tracks, “Manhattan Fever” and “Katherine The Great,” Wynton Marsalis joins the ensemble. These are long, hard-swinging tunes with plenty of room for everyone to blow. On “Manhattan Fever,” Marsalis gets a long solo, but he’s not treated like a star gracing the band with his presence — the guys before and after him hit as hard as they can, too, and the result is a blowout.

This is a fascinatingly weird, not-quite-retro album by an up-and-coming saxophonist. Flocks, along with guitarist and producer Art Chersky, keyboardist Frank LoCrasto (who’s worked with Jeremy Pelt), bassist Martin Nevin, and drummer Evan Hughes, tackle a collection of songs that aren’t standards, but are old, and associated with singers ranging from Billie Holiday and Frank Sinatra to Sam Cooke, Roy Orbison and Patti Page. The arrangements are a little bit soul jazz, a little bit hard bop, and a little bit lounge-act, but there’s also an edge of weirdness to them, like something out of a David Lynch movie. The consistency of the mood is what makes the album really special; it’s like you’re hearing it in a dream. The band’s version of Sam Cooke’s “Smoke Rings” features gentle guitar and organ, and a slow-dance beat, over which Flocks’ tenor floats like he’s playing a 1950s prom.