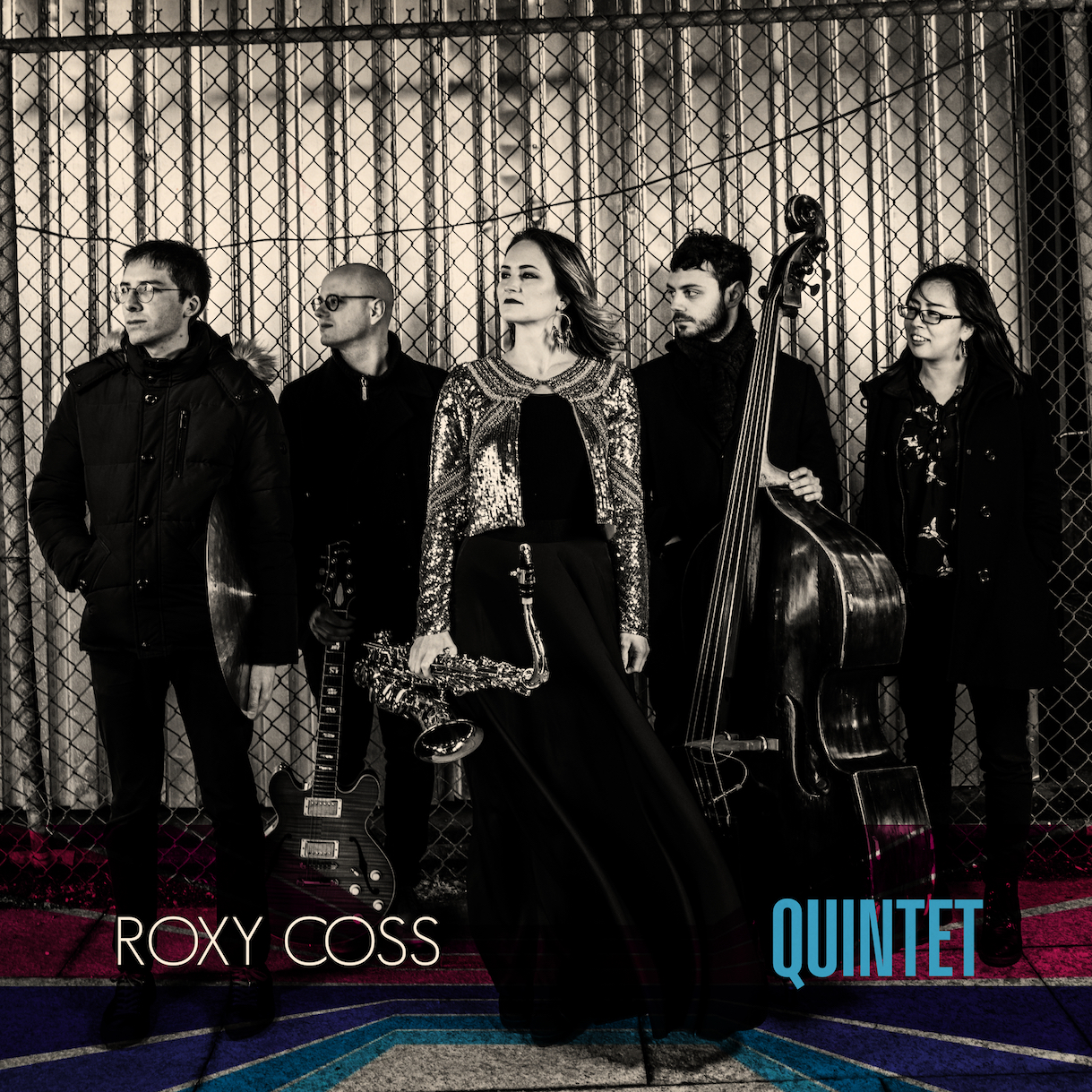 Outside In Music is thrilled to welcome ASCAP-award winning saxophonist Roxy Coss to their roster with the release of her fifth album, Quintet. This exciting video project serves to rearrange and reimagine a collection of previously heard Coss-penned tunes. Rather than a “greatest hits” package, Quintet offers fans an invigorating compilation of fresh new takes on some of the stalwart’s most cherished compositions, plus one new track – the saxophonist’s arrangement of “All or Nothing At All”. These eight live recordings will each have their own individual video release. Check out the lead single “Don’t Cross the Coss”, released on May 10th here! The disc’s title indeed has a double meaning, as although it marks Coss’ fifth album as a leader, it also notes her favorite type of small jazz ensemble. Quintet is brought to fruition by the bandleader’s formidable group which features pianist Miki Yamanaka, guitarist Alex Wintz, bassist Rick Rosato and drummer Jimmy Macbride. The group will celebrate this release at Smalls Jazz Club, NYC on September 6th & 7th.

Roxy Coss’ first four discs charted her evolution of becoming a modern jazz saxophonist of note. She exemplifies the true glories of a jazz musician by being both a torchbearer and an envelope-pusher. As an instrumentalist, she wields a burnished, brawny tone, capable of expressing a gamut of emotions. Her prowess on the tenor and soprano saxophones has elicited placings in DownBeat magazine’s critics’ polls in five consecutive years.

Then there’s Roxy Coss, the insightful composer. The bulk of her burgeoning discography contains fetching originals – a few of which are, as regarded by jazz journalist John Murph, bound to become early 21st-century jazz staples.  All of these fine attributes reign on the aptly titled Quintet, while it offers a new celebration of sorts – Roxy Coss, the bandleader. Classic 1960s Blue Note ensembles such as Art Blakey and the Jazz Messengers and various groups led by saxophonists Wayne Shorter and Hank Mobley provided the earlier boilerplate for the Roxy Coss Quintet, which began in 2008 – two years before she released her self-released, eponymously titled debut. After landing a residency at New York City’s jazz club Smoke, Coss reconfigured her own frontline by pairing her saxophones with guitar. At this time, Alex Wintz joined the band and the guitarist is now the Quintet member with the longest history of playing with her. The rest of the ensemble consists of drummer Jimmy Macbride, bassist Rick Rosato, and pianist Miki Yamanaka – all of whom played on Coss’ fourth, critically-acclaimed disc, The Future Is Female (Posi-Tone, 2018).

The album blasts off with “Don’t Cross The Coss”, which was first recorded on Coss’ 2016 Origin Records’ release Restless Idealism. The whimsical title plays up some people’s initial misreading of the composer’s last name! While Yamanka’s glimmering Rhodes accompaniment elevates and uplifts the disc’s sole non-original, “All or Nothing At All,” “Mr. President,” is a biting socio-political commentary on U.S. President Donald Trump. Reminiscent of Charles Mingus’ classic “Fables of Faubus”, this ominous tune originally appeared on The Future Is Female.

Brighter spirits return on the pulsating “Free to Be,” a tune from her 2017 Posi-Tone disc, Chasing the Unicorn; it’s a self-prescribed manifesto Coss penned for herself to help her push through fake barriers that nip creative energy and personal development. The sauntering, Brazilian-flavored “You’re There,” – also from Chasing the Unicorn – celebrates  her marriage with saxophonist Lucas Pino. Following “Enlightenment” – a ballad which graced Coss’ 2010 debut – is “Breaking Point.” On this soaring composition, which first appeared on Restless Idealism, Coss’ soprano sax embarks on coruscating passages in twin-fashion with Wintz. Quintet concludes with another socio-political statement – the urgent “Females Are Strong As Hell,” arguably the emotional centerpiece for The Future Is Female.  Indeed, it’s an anthem in light of the #metoo Movement and the fight for many female jazz musicians such as Coss to get the same recognition and performance and recording opportunities as their male counterparts.  It should be noted in addition to Coss being also a respected jazz educator on the Jazz Education Network’s (JEN) board of directors and on jazz faculty at The Juilliard School, The New School, and the Borough of Manhattan Community College (a CUNY School), she’s the founder of Women in Jazz Organization.

Roxy Coss’ saxophone and compositional gifts have been without question for nearly a decade, and with Quintet her bona fides as a noteworthy bandleader have now been deftly and unquestionably established.

MORE ABOUT ROXY COSS
Originally from Seattle, Roxy has been a fixture on the New York scene for over ten years. She has headlined extensively around the world, including major festivals and venues like the Newport Jazz Festival, Melbourne Big Band Festival, Earshot Jazz Festival, San Jose Jazz Summerfest, Ballard Jazz Festival, The Jazz Standard, and Jazz Showcase, among others. Coss has performed as a side musician with Jazz greats including Clark Terry, Louis Hayes, Rufus Reid, Billy Kaye and Claudio Roditi. She was a member of trumpeter Jeremy Pelt’s group from 2012 through 2014, and toured with the MACKTET, co-led by Pelt and drummer Willie Jones III. She has been a member of The Diva Jazz Orchestra since 2010, and was a member of the Off-Broadway hit, Maurice Hines is Tappin’ Thru Life. Past performance experience also includes Wynton Marsalis, Buster Williams, Joshua Redman, Joe Lovano, Mulgrew Miller, Harry Allen, Steve Wilson, Mark Gross, Gary Smulyan, Harold Mabern, Jerry Vivino, Eric Marienthal, and Ken Peplowski, among others. Roxy was also a featured guest musician on the television show Harry in 2017!

Women In Jazz Organization (WIJO) is a collective of over 300 professional jazz musicians who identify as women or non-binary. WIJO intends to help level the playing field, so that women and non-binary people have equal opportunity to participate in and contribute to the jazz community, leading to an improved and more rich, diverse, and successful art form. The organization is committed to honoring Black Americans as the creators of jazz. WIJO is largely a New York-based organization, with connections to other individuals and groups nationally and internationally. The organization aims to empower the individuals within, as well as come together to empower the larger community of jazz musicians who identify as women or non-binary as a whole. Members of the organization work to address inequalities in jazz culture to change the landscape of the current jazz scene. The organization also works to improve the perceptions and treatment of women and non-binary people in jazz from outside the jazz community.