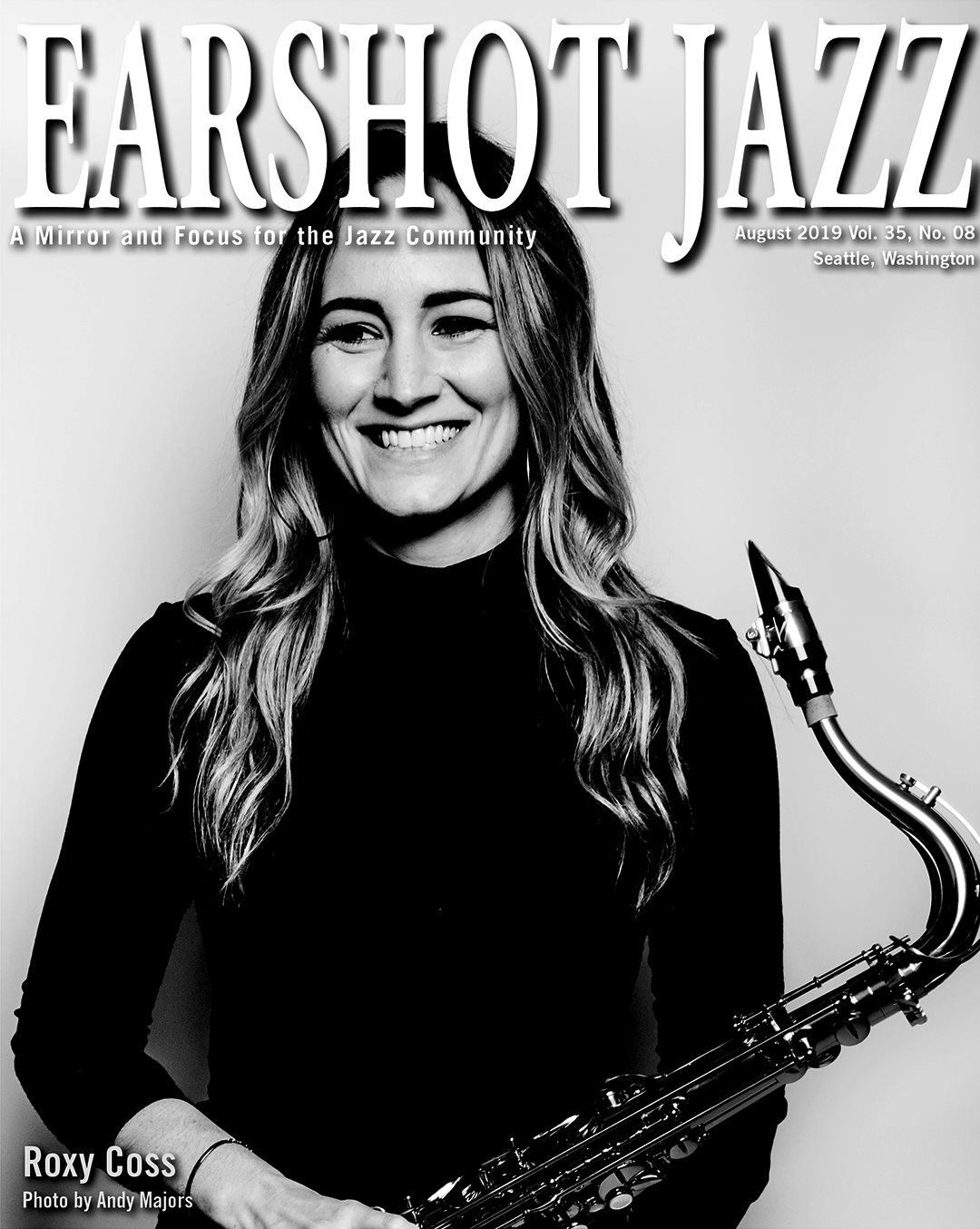 Being a Seattle jazz musician, and spending some serious time in New York City has become a rite of passage in many ways. Those who venture east seem to gain an edge, not only in terms of experience, but in the understanding that there are no excuses. Do the work. Find out how you stack up.

Some spend years there and return to Seattle, bringing home a greater depth and understanding of the music, which in turn pushes the scene in Seattle creatively. The experience also feeds what New York is and always has been—a mecca of diverging culture, gathering its sum into a collective energy.

The city’s frenetic pace appeals to some from the more laid-back environs of the west coast. Seattle born and raised saxophonist and composer Roxy Coss is one of those souls. Coss received the bedrock of her music education and appreciation through the exceptional programs at Washington Middle School, under the direction of Robert Knatt, and Garfield High School, under Clarence Acox, before expanding her horizons.

Now twelve years into her New York tenure, she has etched out a place for herself as a musician and educator, as well as an international touring artist. She leads her own renowned quintet, and continues to be a sought-after bandmate, having toured extensively with Jeremy Pelt, Rufus Reid, and Louis Hayes, among others.

Coss returns to Seattle in August, riding the wave of a brand-new release that is focused on live interpretations of her compositions from her first four albums, including the 2018 release, The Future is Female. Titled simply Quintet, the record gives the artist the opportunity to showcase her working quintet, which includes guitarist Alex Wintz, bassist Rick Rosato, pianist Miki Yamanaka, and drummer Jimmy Macbride.

When asked about the recording process for Quintet, Coss says, “We all went into it almost like it was a gig, and the vibe was just ‘it is what it is.’ This [approach] allows a certain amount of freedom, knowing you are only documenting one way of playing these tunes.”

“I chose to record ‘old’ compositions of mine on the new album, because the focus this year has really been on building the band, not on my individual journey through a new personal theme,” she explains. “We have continued to play the Future is Female material, which is still very much at the forefront of my consciousness. But this particular collection of compositions represents the tunes from all four albums that have continued to provide inspiration, fun, and growth for the band over the years.”

Coss celebrates the release of Quintet on August 21 at the Royal Room. Joining her is an all-star Seattle band featuring pianist Randy Halberstadt, bassist Michael Glynn, guitarist Milo Petersen, and drummer D’Vonne Lewis. The venue in itself is a perfect fit; situated in the Columbia City neighborhood where she grew up.

In her writing, Coss’ compositions reflect her passion as an activist for gender equity in jazz. She is the founder of the Women in Jazz Organization (WIJO), which takes aim at promoting unity and opportunity by gathering resources and creating a network to improve the experiences of women and non-binary people in jazz. Coss’ activism is focused and far-reaching. For her, the roles of activist and musician are intertwined, saying, “This has been my reality for my whole life—every time I pick up a saxophone.”

Coss’ musical persona is fiercely confident and focused. Her growth as a musician, composer, and bandleader has taken giant steps forward over the course of her time in New York. Forming WIJO has given her, and many other women and non-binary people in jazz, a platform to inspire and mentor by effective means.

Coss formed WIJO in July of 2017 not knowing what to expect. “I knew I needed something, but I didn’t know what,” she says, “I tried to fill a hole that I felt in the community and my day-to-day life as a female jazz musician. I don’t think we will truly know our impact for years to come. This is a long-term project, and it takes time to create real change. I think it requires a huge amount of vision, foresight and persistence, and I am in it for the long haul.”

Looking to the future, Coss is excited about growing WIJO. “We are launching a new committee-based structure in the fall, so that more members can be actively participating in and leading the projects we are working on,” explains Coss. “Our primary goals are creating a space for education and empowerment among our professional members, creating a network for members to participate in and build community, and creating change for more equity and representation in the overall jazz scene and industry.” Finding that place between creativity and purpose is an ongoing dialogue in a socio-political landscape that is always shifting.

“You have to realize that even though some people are far more ‘woke’ these days, there are still people out there who have been playing and teaching in this industry since the 1940’s, and they carry a lineage with them that is full of cultural idiosyncrasies that are intrinsically misogynistic. So that is still our ‘ground zero’,” Coss explains.

While Coss’ musical journey has been refined by formal jazz education, it has been her time in the hardscrabble environment of the New York scene, and the oral tradition it provides that has shaped her approach, and defined her sound. It has a nuanced language all its own.

“ I have come to know jazz as a language—not a metaphor for language, but an actual language. There are different dialects in jazz, just like in any language. The New York dialect of jazz is special. New Yorkers are a certain breed,” she says.

For Coss, the pull to stay in New York is potent—the grinding, exhausting relentlessness of the city still provides inspiration and opportunity, and drives her artistically.

“I think at some point, any serious jazz musician must live in New York for a period of time […] And for me, that time is still now.”