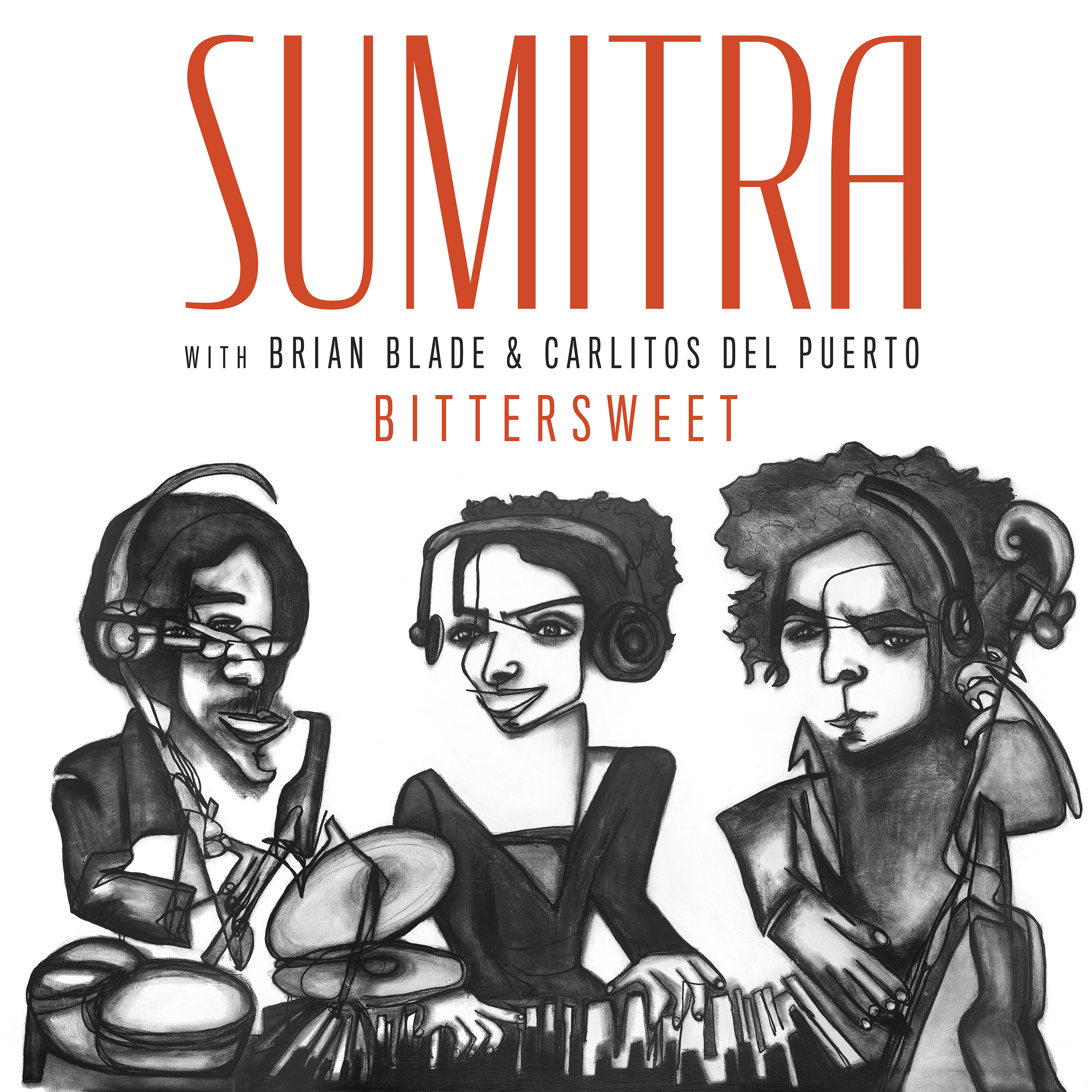 Vocalist and pianist Sumitra is thrilled to announce the September 13th release of Bittersweet, her fourth album as a leader. Joined by master bassist Carlitos del Puerto and iconic drummer Brian Blade, Sumitra reveals herself as a multi-dimensional artist – a vocalist, pianist, lyricist, composer and arranger. Produced by Alex Machacek, Bittersweet features seven of her melodic originals, a song adapted from the corpus of Béla Bartók, and personalized interpretations of the American songbook standard “The Way You Look Tonight” and “Freedom,” by former Young Disciples singer Carleen Anderson.

It’s a breakout album for Sumitra, who over the last decade has steadily raised her profile around Los Angeles, where she and guitarist Machacek, her husband, have lived since 2004. Her conception, like her fluid, richly hued contralto voice, is individualistic and immediately identifiable, as she refracts into her own argot elements gleaned from such stated signpost figures as Annie Lennox, Kate Bush, Joni Mitchell, James Taylor, Stevie Wonder, Al Jarreau, and Chaka Khan. Her partners, each a world-class listener, complement, guide and propel  the flow with sublime taste and musicality. Machacek, who contributes two string arrangements, augments several tracks with his pellucid guitar tone.

Sumitra chose, wrote and rewrote the songs for Bittersweet from the summer of 2017 through the March 2018 recording date. In a sense, on Bittersweet, Sumitra presents a spiritual autobiography, pulling together her experiences, twists and turns into a collection of stories that, reflect the contradictory emotions implied by the title. Not least of these vignettes is the title track itself. Composed in December 2017, three months before the recording, “Bittersweet” juxtaposes memories of her mother’s December death, of their mutual December birthday, of her December wedding anniversary. “After my parents’ departures, I’ve been given a new definition of self,” she says. “I’ve learned that grief and joy can and do coexist side by side, in harmony — and it’s good.” She cites [bestselling author] Brené Brown’s descriptor, “holding the tension,” adding: “To me it seems that this quality (which you could also call ‘holding the balance’) is what life — and making music — is all about.”

Complemented by Machacek’s evocative string arrangement, the 1998 song “Make Me Whole” depicts an impressionistic template of the breakup of Sumitra’s first marriage; “Funny” — the music is an adaptation of one of Bartok’s Roumanian Dances, which Sumitra was then working through — depicts the origin story of her second marriage. “See You Again,” written in 2008, traces her 5 a.m. frame of mind just after her mother had concluded a month-long visit. “Take The Reins” portrays a close friend, who suffered from depression and eventually took her life, and other people close to Sumitra who suffer from mental illness — as a kind of coda, Del Puerto uncorks a brilliant solo that showcases his spot-in intonation and melodic gifts..

Sumitra Nanjundan was born in New York City to Indian parents. At age 2, her family relocated to Vienna where she attended an English school. She began her musical studies at age 5, and at ten years old, moved to the UK to attend boarding school. Eventually, the performer went on to attend the University of Massachusetts, where she encountered such faculty luminaries as Max Roach and Archie Shepp, and heard concerts by jazz superstars Dizzy Gillespie and Sarah Vaughan.  After two years, unhappy with her chosen business major, she left school and returned to Vienna to prepare for the entrance exam at the Vienna Academy of Music, but became distracted from classical pursuits after unexpectedly joining her first band, Satu, as a writer and lead singer.

After leaving Satu, Sumitra began working with jazz pianist Peter Josel, who brought into the mix guitarist Peter Legat (currently leader of Count Basic), who linked her to other jazz musicians with whom she formed the first band under her name. Later, during the mid- to late 1990s, Sumitra became a regular performer at the (then) recently opened, now well-known Vienna jazz club Porgy & Bess.

In 1995, Sumitra released her first full-length album, The Secret Of Our Souls. This led to “a major record contract, which was an absolute disaster in the end,” and a year-long stay in London. There she functioned mainly as a studio singer, but also jammed with dance bands, and later on, after returning to Vienna in 1997, worked as a recording and performing artist, also singing in gospel formations. That year in Vienna she met Alex Machacek on a gig; they fell in love, soon thereafter they became a duo, and then, in 2003, a married couple.

In 2004, Sumitra and Machacek recorded the voice-guitars-bass-and-drums album Indian Girl. That same year, they decided to move to Los Angeles, where they are still based. 12 years later, Sumitra released her third album Still. For Sumitra, Bittersweet and its immediate predecessor, Still —  a wonderfully layered 2016 release on which she deploys her considerable pianistic skills to weave the piano parts with the words through a 12-song (9 originals) program — constitute a personal breakthrough after decades in the trenches.

She is thrilled to present her musical tour-de-force Bittersweet this September.  “For me, sharing my stories is about the connection to our authentic selves, to and with others,” she says in an accurate piece of self-description. “Here I’ve kind of taken back my story — I’ve hopefully reached the point where I can show what the music is telling me about these songs, and can give them the right respect, treat them as they deserve to be treated.” The personal growth and maturation of this restless, brilliant spirit is the listener’s gain.