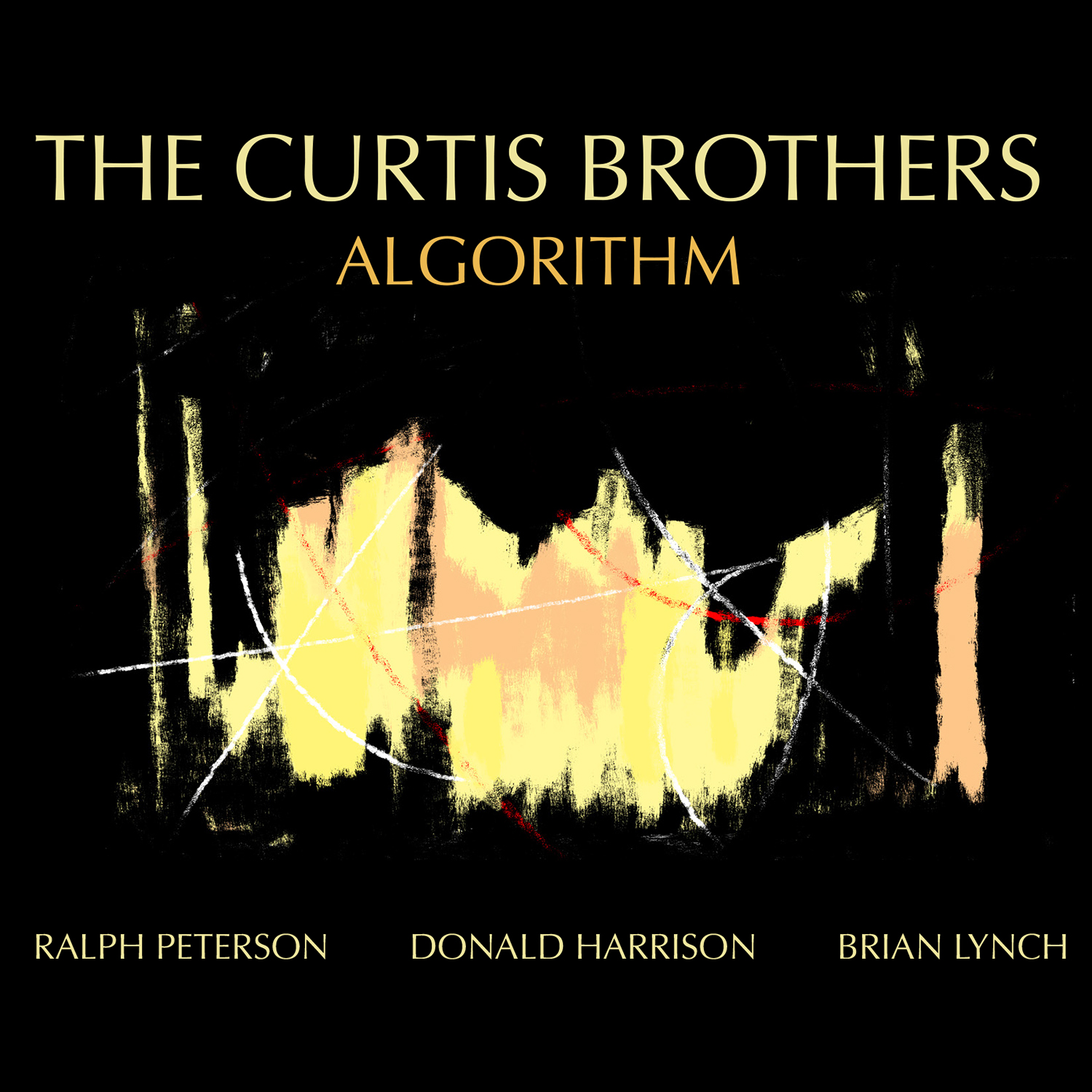 The Curtis Brothers Invite Cherished Jazz Mentors to Fuse Mathematical Ideas with the Soul,
on Algorithm

Truth Revolution Records is proud to announce the release of Algorithm, the new album from brothers – and unmistakable piano/bass duo – Zaccai and Luques Curtis. Algorithm is a nine-track collection of originals, best described in chapters – each titled after a mathematical concept or term, with the exception of the chapters that serve to honor The Curtis Brothers’ mentors. Narrated by Jazz Messenger alums, trumpeter Brian Lynch, saxophonist Donald Harrison and drummer Ralph Peterson, Algorithm conveys the great contribution that each of these three jazz titans have had on the artistic development of The Curtis Brothers. While some may regard Algorithm as the sequel to 2012’s Completion of Proof – the debut release from The Curtis Brothers Band – one can be certain that this recording undoubtedly emanates the spirit of the great Art Blakey. With these compositions, Zaccai and Luques aim to fuse mathematical ideas with the soul – by enlisting this all-star band, the brothers have succeeded in bringing their vision, and its full potential to fruition.

Commissioned by New Jazz Works – Chamber Music America, Algorithm can be simply seen as a book of music that, through its deftly constructed movements, displays the sound of this vigorously talented band in its truest and purest form. It’s worth noting the heightened sense of improvisation on tracks/chapters 3, 6 and 9. Discussed in further detail below, these tracks feature the brothers’ three mentors and offers each – Harrison, Lynch and Peterson – the opportunity to direct the narrative of their own respective tune. Donald Harrison offered this dynamic duo their first opportunity to be a part of a touring band which, since 2001, has seen them perform extensively across Europe. As Zaccai exudes, “Harrison has really nurtured our musical development in all styles of music.” Upon their move to New York City, Zaccai and Luques began working with Brian Lynch – Luques regularly collaborated with Lynch as part of the Eddie Palmieri band. The trumpeter has dedicated himself on numerous occasions to the support of the pair’s label, Truth Revolution Records. Drummer Ralph Peterson began mentoring the brothers in 2005 and has regularly joined forces since. As a trio, Peterson and the brothers most recently released TriAngular III – a duel record label release from Truth Revolution Records and Peterson’s Onyx Production Music Label.

“Three Points and a Sphere” kicks off proceedings – the tune serves to reminisce upon The Curtis Brothers’ beginnings in Hartford, Connecticut. Knowing this compositional context, the track’s placement in the album’s setlist is truly apropos. The composition pays homage to Jackie and Dollie McLean, with a nod to the logo of The Artists Collective, Inc. The Artists Collective, Inc. is one of several schools that The Curtis Brothers attended in their youth, as part of their early musical development. “Phi” brings light to the golden ratio –  a special number that many living things abide by, in order to grow and develop. Many artists use this concept in their work, in order to bring beauty into their creation. Rhythmically, “Phi” incorporates a New Orleans-based rhythm, made famous in the “jazz” world by pianist Ahmad Jamal, through his interpretation of the composition “Poinciana”.  “Parametric” emphasizes a strong focus on syncopation with bebop influences, while  “Torus” was written in a ¾ time signature, and takes its title from an object that conceptually offers interesting ideas, when its mathematics are addressed by the arts. Many artists, like M.C. Escher, have played with mathematical ideas that bend the governing parameters of our physical reality – specifically, his work influenced by the “mobius strip” comes to mind.

The album continues with Chapter Seven – a musical sequel to “Manifest Destiny”, from the aforementioned first Curtis Brothers recording, Completion of Proof. The composition, entitled “Undefined” exhibits an Art Blakey concept – one in which Reggie Workman’s non-walking bass line would combine with Blakey’s swing, in order to create a counterbalance. Here, and throughout other chapters on Algorithm, the brothers have honed this sound with the help of Ralph Peterson. The track takes its title from the surprising result displayed on a calculator when dividing any number by zero. While “Staircase of Mount Meru” pays tribute to Indian mathematician Pingala – the earliest source of reference for what is commonly known as “Pascal’s Triangle” – chapters three, six and nine cast the spotlight on Harrison, Lynch and Peterson, respectively. “Chief” features The Curtis Brothers’ earliest mentor and touring band leader in the professional world, “Big Chief” Donald Harrison, Jr., while “The Professor” illuminates the talents of Brian Lynch, who crafts an incredible tale throughout the entire composition. Chapter Nine, entitled “Sensei” serves as a showcase for Ralph Peterson, who chronicles his fascinating journey within life and music on this album closer.

MORE ABOUT ZACCAI CURTIS
After graduating from New England Conservatory in 2005, Zaccai Curtis moved to New York City where he performs regularly with artists such as: Donald Harrison, Cindy Blackman Santana, Eddie Palmieri, Christian Scott, Ralph Peterson, T.K. Blue, Brian Lynch, Ray Vega, and Eric Person amongst others. Curtis composes and arranges for his own quartet, trio, Big-Band and more. In 2003 he was chosen as a winner of the ASCAP Young Jazz Composer’s competition and each year consecutively through 2006. Zaccai and his quartet were selected by the U.S. State Department to be in the American Music Abroad (Jazz Ambassadors) program twice in 2006. They performed in Bangladesh, Calcutta, Bangalore, Mumbai, Sri Lanka and the Maldives. In 2007 Zaccai Curtis was awarded the ‘Connecticut Commission on Culture and Tourism’s Artist Fellowship’ for ‘original composition.’ In 2017 Curtis became a Chamber Music America: “New Jazz Works” grant recipient. Zaccai currently performs his own music with his group ‘Curtis Brothers Quartet’ and recently released his new album, Syzygy(2017) after three successful releases; ‘A Genesis,’ ‘Blood Spirit Land Water Freedom’ and ‘Completion of Proof.’ Zaccai, along with his brother Luques, has developed a recording collective (TRRcollective) of musicians that produce music on their own terms. He is proud to have been a producer for the GRAMMY nominated album (Entre Colegas 2016) released on the label (Truth Revolution Records/TRRcollective). Zaccai created the first ever music news app developed primarily for record labels: ‘The Riff: Music News’ available on iTunes and android.

Luques Curtis studied at the Greater Hartford Academy of Performing Arts, Artist Collective, and Guakia with Dave Santoro, Volcan Orham, Nat Reeves, Paul Brown, and others. While attending high school, he was also very fortunate to study the Afro-Caribbean genre with bass greats Andy Gonzalez and Joe Santiago. Curtis earned a full scholarship to Berklee College Of Music in Boston. There he studied with John Lockwood and Ron Mahdi. While in Boston, he also worked with great musicians such as Gary Burton, Ralph Peterson, Donald Harrison, Christian Scott, and Francisco Mela. Luques was also a recipient of the prestigious Bunche Fellowship to attend the Mason Gross School of the Arts at Rutgers University. Now living in the New York area, Curtis has been performing worldwide with Eddie Palmieri, Brian Lynch, Ralph Peterson, Christian Scott, Sean Jones, Orrin Evans, Stefon Harris, and others. He is the recent recipient of the 2016 DownBeat Rising Star Bassist on the Critics Poll. Co-owner of Truth Revolution Records, Luques contributed his talents to Brian Lynch’s Grammy winning album “Simpatico” and his Grammy nominated “Madera Latino” as well as Christian Scott’s Grammy nominated “Rewind That”. He also produced Grammy nominated “Entre Colegas” by Andy Gonzalez. Luques can be heard on Eddie Palmieri’s “Sabiduria”; Gary Burton “Next Generations”; Dave Valentin “Come Fly With Me”; Sean Jones “Roots”, “Kaleidoscope”, “Improvise”, and “The Search Within”; Albert Rivera’s “Re-Introduction”; Etienne Charles’ “Folklore”; Orrin Evans’ “Faith In Action”.