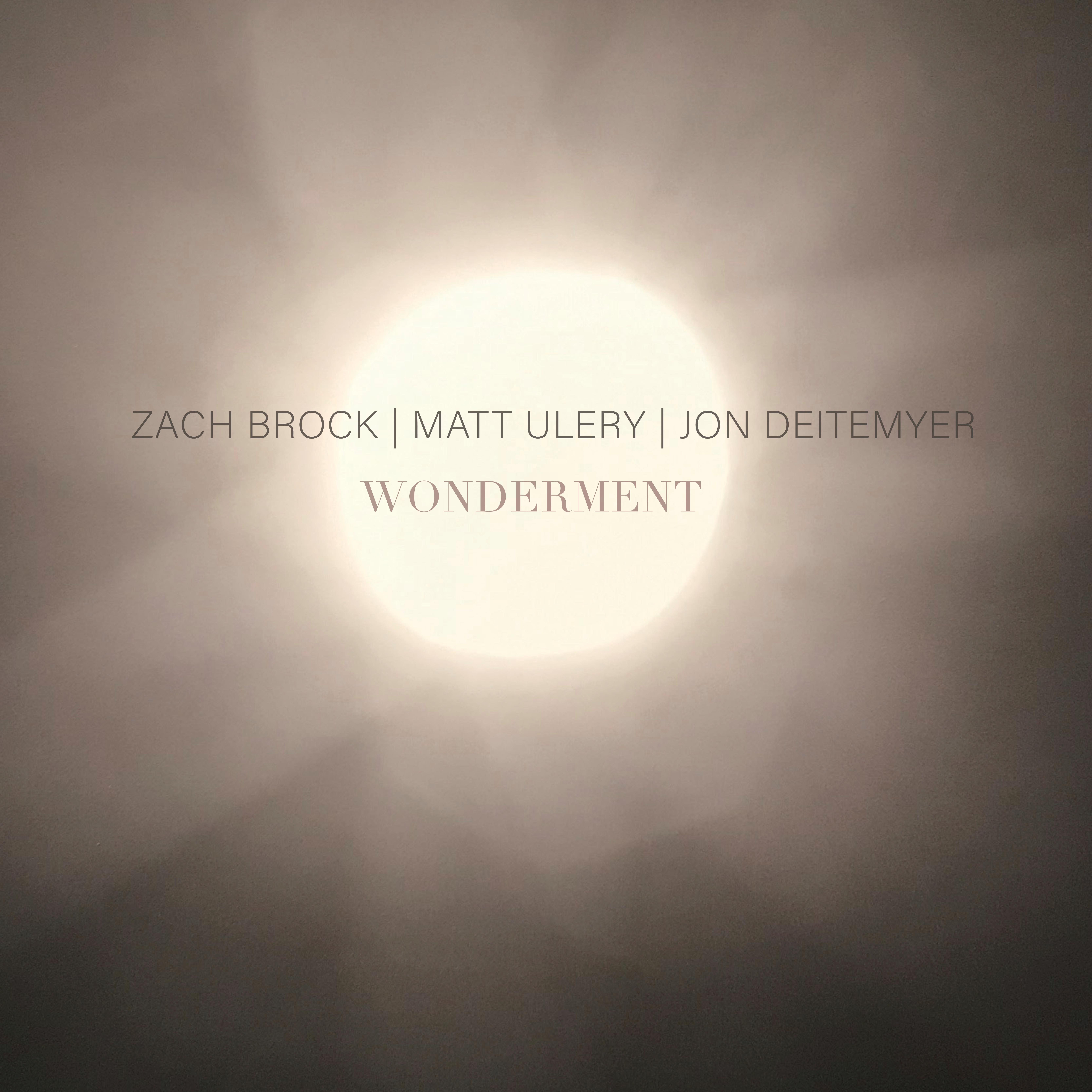 For violinist Zach Brock, bassist Matt Ulery, and drummer Jon Deitemyer, their debut trio album Wonderment is very much a realization of separate musical journeys coalescing into one undeniably personal statement. Due to be released on July 16th on Ulery’s Woolgathering Records, Wondermentfeatures original compositions from all three members for this unique violin/bass/drum trio. The group’s almost fifteen-year musical relationship culminates with this exciting new collaborative release.

“You have to play a long time to be able to play like yourself” famously remarked Miles Davis. For an individual musician the meaning is clear: put in the time practicing, performing, writing, and failing, and (hopefully) something undeniably personal and sincere will emerge from the struggle. Often-times this emergence of originality occurs in moments of isolation. But occasionally a group of musicians can illuminate the path ahead together with that immutable light afforded through trust – such is the case for this heavyweight ensemble of Chicago elite.

On this twelve-track collection of originals, the trio covers a wide array of compositional and improvisatory ground: from Ulery’s loping, odd-timed“Nightshade” to Brock’s driving and somewhat tongue-in-cheek “Cry Face” to Deitemyer’s post-bop tinged“Wokey Dokey”. Wonderment prioritizes sincerity in its compositions and performances. There are moments of courageous improvising and palpable energy, and moments of serene beauty and restraint. There is darkness and humor, and above all a sense of care and unity that can only arise between musicians that have traveled their paths alone, but then meet around the creative hearth to re-connect.

Zach, Matt, and Jon began playing together in 2005 in Chicago. What began as a casual monthly session grew quickly into local gigs and deeply personal musical connections. Zach’s move to New York afforded him countless opportunities with incredible musicians (Stanley Clarke, Snarky Puppy, Phil Markowitz, Clarence Penn) and even earned him a Grammy Award and a Downbeat Magazine “rising star” accolade. Matt has grown into a prolific composer and performer by any measure, boasting eight recordings as a leader (three on Dave Douglas’ Greenleaf Music label) and performances as a bassist with Greg Ward, Marquis Hill, Makaya McCraven, and Eighth Blackbird. Jon is a long-time sideman with Patricia Barber and Matt Ulery’s projects, and has toured with Garrison Keillor’s “Prairie Home Companion.” He has a recording of his own original compositions on ears&eyes Records.

All of this experience and creativity came together in 2014 when the trio recorded a track for Ulery’s Greenleaf album In the Ivory. The thoughtfulness, transparency, and challenge of the music making demanded more opportunities, and so the three musicians agreed to officially create a bona-fide band. Opportunities and performances quickly arose. Brock, Ulery, and Deitemyer played as a trio (and with the Miami String Quartet) as the featured performers for “Off the Hook Arts” Festival in Fort Collins, CO. They premiered “Become Giant,” a major work of Ulery’s for string sextet+drums commissioned by the Chamber Music Festival of Lexington to feature Zach, and performed with a quartet led by First Associate Concertmaster of the LA Phil, Nathan Cole.