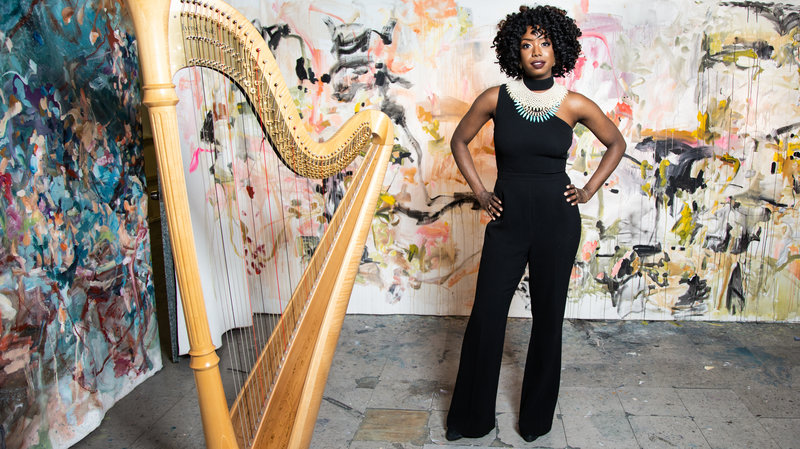 The title track of harpist Brandee Younger‘s new album, Soul Awakening, begins with a gathering stir, like some momentous weather moving in. Dezron Douglas plays the first decisive notes on upright bass, joined shortly by a flutist and three saxophonists. The song never locks into a tempo, but it has a guiding hand in Younger, with her subtleties of pluck and shimmer.

Younger, 35, has spent much of the last dozen years in a state of arrival, or maybe a process of emergence. Recent events suggest that she’s now fully emerged. She was a winning feature of the most stylish jazz album from 2018, Makaya McCraven‘s Universal Beings. Like McCraven, she contributed a track to the all-star Beatles tribute A Day in the Life: Impressions of Pepper. A generous taste of her music, from a 2013 Field Recording filmed by NPR Music in an oddities museum, can be heard during a touching scene in Homecoming, Beyoncé‘s documentary film.

You wouldn’t know this just by hearing it, but Soul Awakening was made in the same era as that Field Recording, near the dawn of Barack Obama’s second term. It’s a self-released album, but you wouldn’t know that either. In terms of both production value and musical substance, it feels like an artifact of our moment: celestial, groove-forward, unabashed about its alchemies of style.

Those traits are all characteristic of Younger, who came to jazz through the unusual aperture of its pathfinding harpists — mainly Dorothy Ashby and Alice Coltrane. Each has a composition here: Ashby’s “Games,” a soul-strutting bossa nova from the 1968 album Afro-Harping; and Coltrane’s “Blue Nile,” a kaleidoscope swirl from the 1970 album Ptah, the El Daoud.

Younger, who’s been playing these songs for maybe half her life, brings unforced authority to her interpretation, working with the album’s muscular rhythm team of Dezron Douglas on bass and E.J. Strickland on drums. The only other cover is “Save the Children,” which Marvin Gaye recorded for What’s Going On, sung here by R&B shapeshifter Niia. (Younger dedicates the song to Ana Grace Marquez-Greene, who died in the 2012 shooting at Sandy Hook Elementary School.)

The original compositions on Soul Awakening are sturdy vehicles — ranging from the smooth-funk reflection of “Linda Lee” to the anthemic fusion of “Respected Destroyer,” which has a front line of trumpeter Sean Jones, tenor saxophonist Chelsea Baratz and trombonist Corey Wilcox, and resembles recent output by Kamasi Washington‘s crew.

Tenor and soprano saxophonist Ravi Coltrane has been an important mentor to Younger, and he turns up on two tracks. “Soulris,” the swaggering opener, is a Douglas tune that highlights the way Younger flows through the cracks, making her presence known no matter how heavy the turbulence. And “Love’s Prayer” is a devotional in the mode of Ravi’s mother, Alice.

Younger’s glissandi and chordal filigree are integral to the structure of the song, and her solo — a delicate, resonant reflection that takes full advantage of the harp’s sonic properties — feels just right. If Soul Awakening is a snapshot, it’s vivid with the details. Still, one can only hope Younger has more in the pipeline; she and her audience still have some catching up to do.