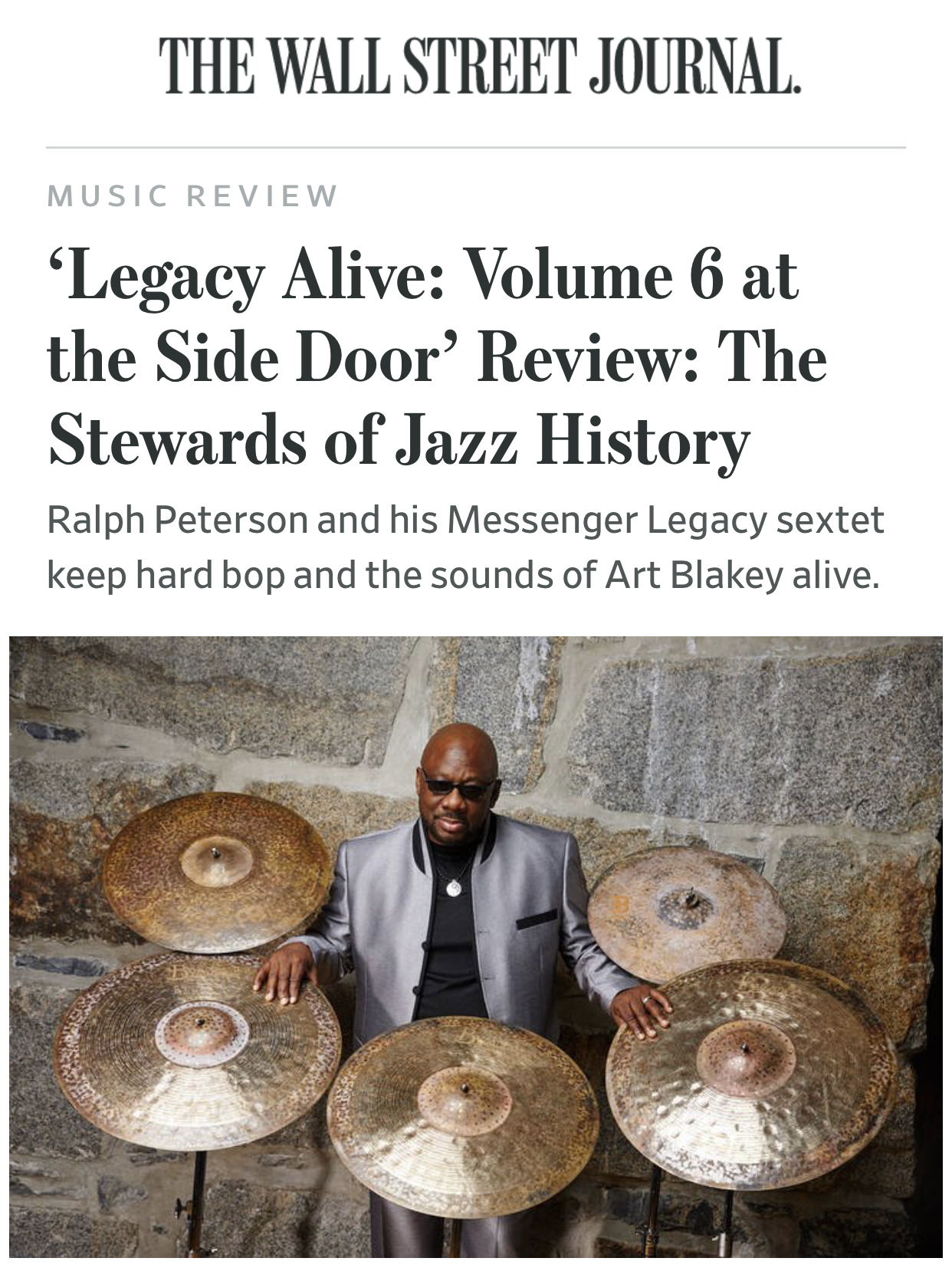 Were he still alive, Art Blakey would turn 100 on Oct. 11. The drummer, a singular force in jazz, died in 1990 at age 71. The Jazz Messengers, the group Blakey led for more than three decades, defined a style often called “hard bop” and helped shape a yet wider range of small-ensemble jazz. Its various iterations maintained a brilliant continuity while nurturing important new music; it was both finishing school and coming-out party for nascent stars (among them Lee Morgan, Wayne Shorter and Freddie Hubbard). Musicians still refer to it as a “university.”

During a Blakey centennial celebration at Jazz at Lincoln Center in January, a staggeringly impressive assemblage of Jazz Messenger alumni discussed this legacy (the trumpeters alone included Wynton Marsalis, Terence Blanchard, Jon Faddis, Eddie Henderson and Charles Tolliver). The first musician to amble onstage was Ralph Peterson, who was among the very few drummers Blakey invited into the Messengers’ ranks; he played in a two-drummer big-band version during the final several years of Blakey’s life. At that celebration, Mr. Peterson told the audience about “Art’s way of managing the music’s energy, of shaping the arc of a solo, a song, a performance. I don’t know if words can really describe it.”

Maybe not. These ideas are better articulated through the music—alternatively hard-hitting and smoothly swinging, densely harmonized and sweetly melodic—on “Legacy Alive: Volume 6 at the Side Door” (Onyx), out now, the two-disc release from the Messenger Legacy, a sextet Mr. Peterson formed five years ago. Mr. Peterson’s original music has spilled forth with innovation since the late 1980s, from the various bands he leads. At 57 years old, he now nurtures young talents himself. Yet Blakey is never far from mind. Mr. Peterson first performed with Blakey in 1983, at the performance center of Berklee College of Music. These days, he’s a professor there. Last year, leading a student ensemble, the Gen-Next Big Band, he released a lively Blakey tribute album, “I Remember Bu,” featuring alto saxophonist Donald Harrison, another Messenger alum.

“Legacy Alive” (the latest in Mr. Peterson’s live-recording series) gathers six former Jazz Messengers still in their prime, and includes tracks recorded at a Connecticut club, the Side Door, during two evenings in 2018, beginning the night after Blakey would have turned 99. There are no wild surprises here but many telling details and, overall, the same evident drive, commitment and mastery that Blakey embodied. When tenor saxophonist Bill Pierce, alto saxophonist Bobby Watson and trumpeter Brian Lynch play in glistening harmony, as on the opening track, Curtis Fuller’s “A La Mode,” they epitomize a three-part approach the Jazz Messengers perfected. When they solo later on, each displays a distinctive voice formed in the decades since Blakey’s passing.

As with Blakey’s ensembles, this band is built upon authoritative drumming but is not about it. Still, Mr. Peterson commands attention. His extended and thoroughly satisfying drum solo opens Mr. Watson’s “In Case You Missed It.” Just as impressive are his modulations of dynamics and rhythmic emphasis while urging on each horn player’s solo during a long, album-closing version of the Duke Ellington-Juan Tizol chestnut, “Caravan” (a Blakey favorite). Blakey was the acknowledged king of the snare-drum press roll; Mr. Peterson honors that form on “3 Blind Mice,” the nursery rhyme Blakey turned into a minor hit in 1962.

Pianist Geoffrey Keezer—at 48, the youngest of this crew—takes an inventive solo, redolent of Thelonious Monk’s logic, within “Blues March,” former Messenger Benny Golson’s stirring composition that stands as a primer on how to swing a march. The group’s eldest member, Mr. Pierce, 70, plays with knowing ease on the ballad “My One and Only Love,” the rhythm section responding with sensitivity to his every utterance. The music is sometimes reverent, other times less so. Bassist Essiet Essiet’s opening figures on Freddie Hubbard’s “The Core” stay true to Reggie Workman’s notes on the 1965 original, yet by song’s end, Mr. Essiet develops his own interpretation of the groove. Embedded within Mr. Watson’s and Mr. Peterson’s solos on “In Case You Missed It” is a pronounced emphasis on the Afro-Cuban rhythms present within Blakey’s drumming.

On Disc Two, that song’s playful propulsion gives way to the serene sway of Mr. Golson’s “Along Came Betty,” and then settles into the forward-leaning bounce of Wayne Shorter’s “Children of the Night.” Through just this snippet of the Messengers’ expansive repertoire comes that sense of pacing Mr. Peterson described. Blakey’s legacy can’t soon fade; too many of his former bandmates are still around. When they join forces it sounds boldly alive, in this moment.

—Mr. Blumenfeld writes about jazz and Afro-Latin music for the Journal.