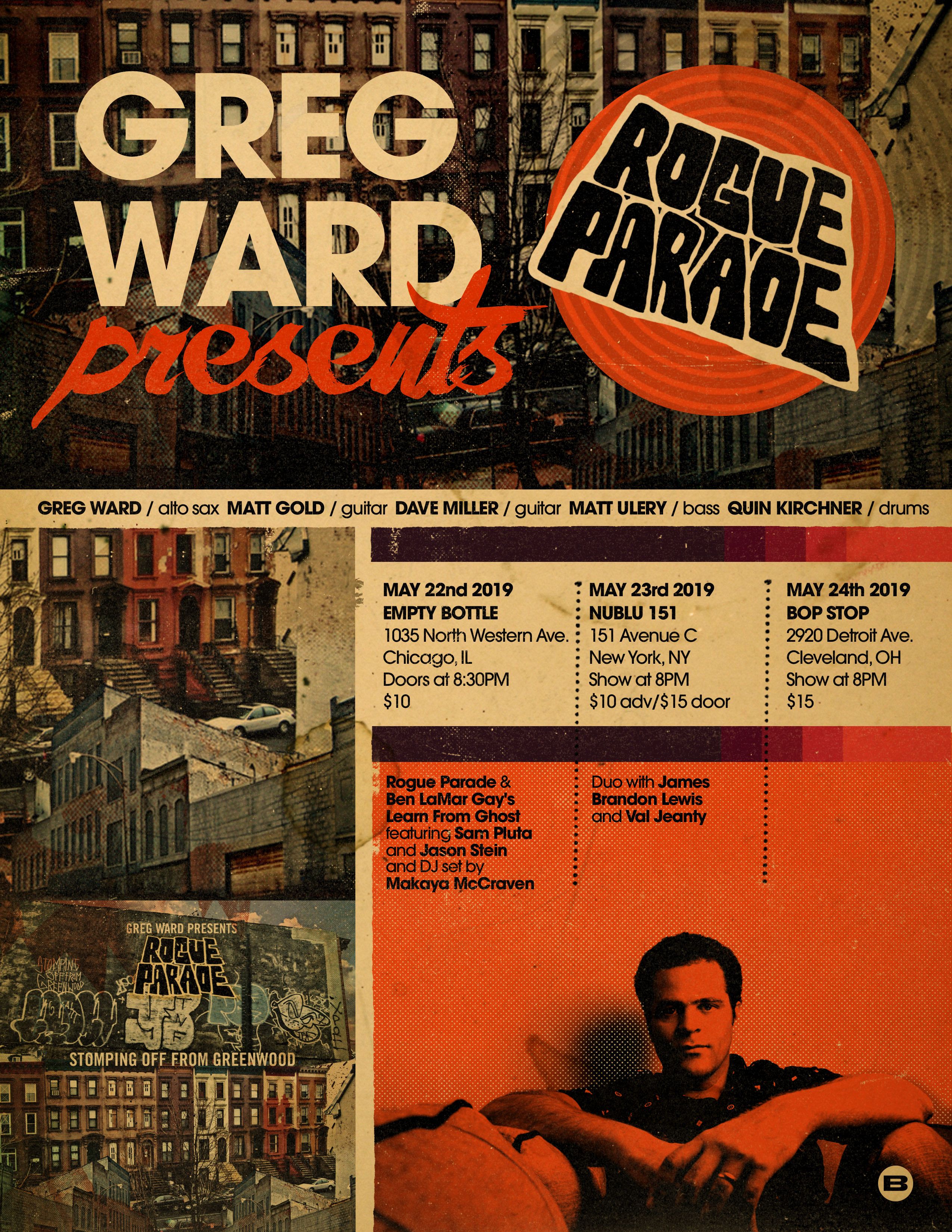 Following the internationally-lauded release of his fourth album, Stomping Off From Greenwood, saxophonist, composer and bandleader Greg Ward is excited to bring his esteemed Rogue Parade to Nublu, located at 151 Avenue C, NYC on Thursday, May 23rd. Featuring the saxophonist, alongside guitarists Dave Miller and Matt Gold, bassist Matt Ulery and drummer Quin Kirchner, this quintet of heavyweight creative Chicago musicians will celebrate Stomping Off From Greenwood, by taking to the stage at 8pm. This anticipated night of music will kick off with a duo set by James Brandon Lewis (tenor saxophone) and Val Jeanty (Electronics). Tickets are $10 in advance and are available here/$15 at the door. Stomping Off From Greenwood is the subsequent release to Ward’s critically acclaimed Greenleaf debut Touch My Beloved’s Thought (2016) – an album which focused on the music of Charles Mingus.

“This album welcomes everyone to hear their own impressions of the music. Ward’s Stomping Off From Greenwood has all the excellence of modern jazz without a hint of the grandiosity. You can make your imagination at home here.”
– Michelle Mercer, NPR

Stomping Off From Greenwood has attracted international attention – check out the multitude of reviews and features, courtesy of The Wall Street Journal, The New York Times, Downbeat, Jazziz, Suono, the Chicago Tribune and more. All press coverage is available to view here.

Having earned wide acclaim as a sideman with artists like Prefuse 73, Lupe Fiasco, Tortoise, William Parker, Andrew D’Angelo, and Mike Reed, Greg Ward introduced his wide-spanning audience to his new, innovative group, Rogue Parade on this January 11, 2019 release – while Stomping Off From Greenwood is Ward’s fourth album as a leader, the release marks the group’s recording debut. Following a 2016 performance at The Whistler, as part of Relax Attack Jazz Series, Rogue Parade was approached by the Chicago club to present a month-long residency. The ensemble honed their sound by following this residency with an extensive Midwest tour, before heading into the studio to capture their collective energy on record. This nine-track collection explores Rogue Parade’s unique two guitar instrumentation and ultimately blends the sonic worlds of acoustic and electronic.