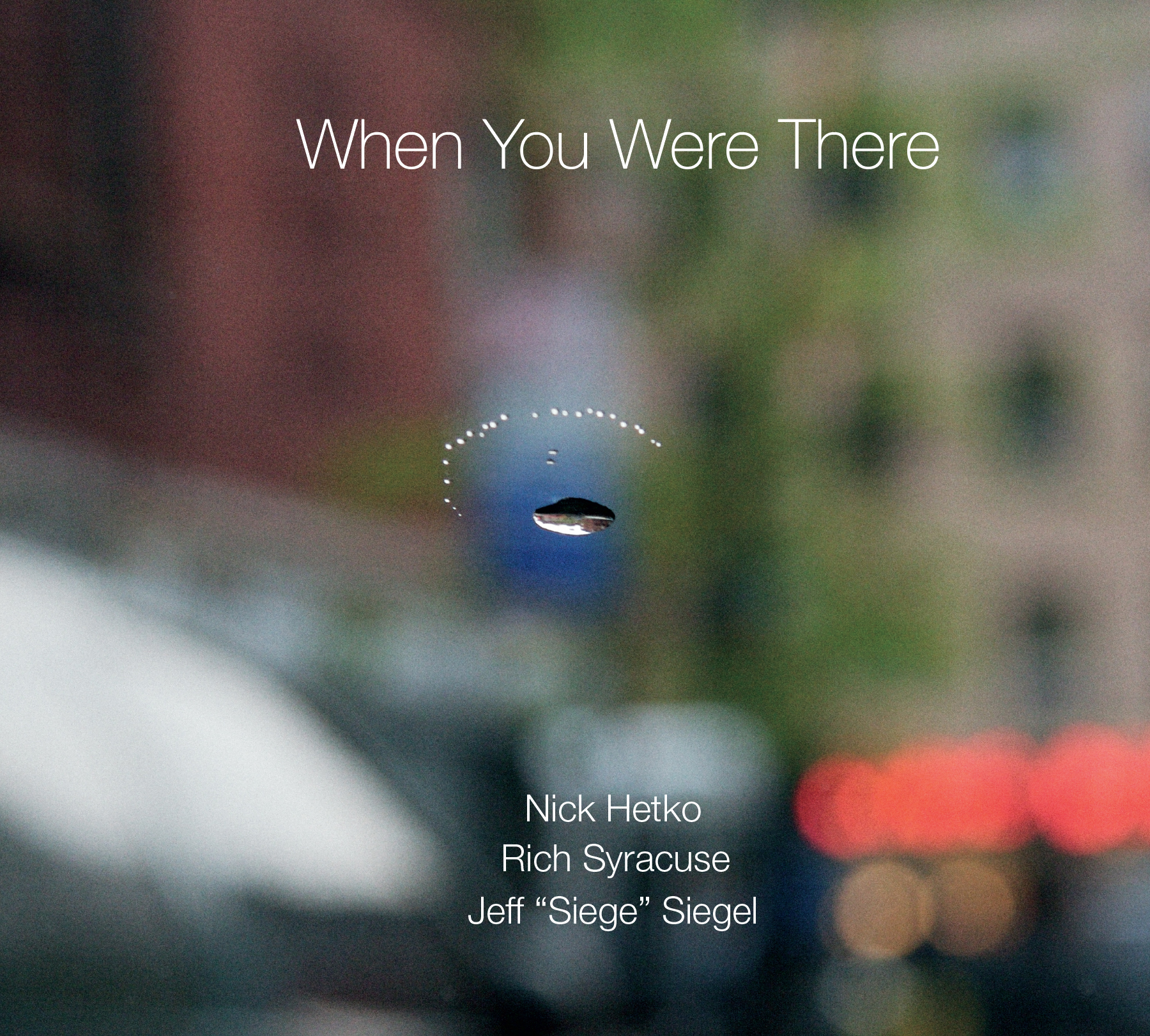 “When You Were There” on June 1st

Hetko, Syracuse & Siegel are proud to announce the release of their upcoming trio album When You Were Thereon June 1 on Artists Recording Collective.  Featuring celebrated young pianist Nick Hetko, and the steadfast rhythm section of bassist Rich Syracuse and drummer Jeff “Siege” Siegel, this release is an homage to a woman who was a mentor and friend to each member of the trio– the “First Lady of Jazz,” Dr. Lee Shaw.  The title track “When You Were There” is a Lee Shaw composition previously recorded with Shaw and her long-time rhythm section of Siegel and Syracuse back in 2003, two tracks “Evie’s Theme” and “Free Fall” were composed by Siegel, “Sleeper” and “The Float” were composed by Syracuse, and “Nica” and “Captain of a Sinking Ship” were composed by Hetko.  Though the album features multiple composers, the stunning interplay on each track of this collaborative effort makes for a cohesive sound and a unified voice throughout.  On Tuesday, June 11th, the Hetko, Syracuse & Siegel Trio will celebrate the release of When You Were There with a 7:30pm performance at the Zinc Bar, followed by a set from Siegel’s Sextet.

Lee Shaw was a band leader, friend and a source of inspiration for Syracuse and Siegel.  Performing for 14 years as a trio, the combination of Shaw, Siegel and Syracuse spent countless hours together on stages across the United States and throughout Europe.  For Hetko, Shaw was a mentor. In Hetko’s words, Shaw gave him “The confidence to persevere.”  In a serendipitous moment, Shaw, prior to her passing, introduced then-timid high school junior Nick Hetko to her rhythm section for a series of recording demos. Siegel notes that even when performing with Hetko at that young age “there was a chemistry that we have continued to hone and refine over years of playing together.”  It seems fitting then that, upon recording an homage to the great Shaw, the rhythm section would choose Lee’s talented protégé, with whom they had already formed a deep connection and friendship, to sit in her seat at the piano.

When you Were There was recorded at NRS Recording Studio by famed engineer Scott Petito in September 2018.  The first track on the album “Sleeper” sets the tone for the record showing the audience Hetko’s stunning facility on the keys, tearing through the changes composed by Syracuse while Siegel drives the group forward with his distinctive, refined comping.  As ever, Siegel’s performance on “Sleeper” is a sheer master-class on swing percussion. Moving forward into the tender triple-meter musings of “Free Fall,” the audience is transported to an ethereal space, encapsulating all of the subtle elegances of a Bill Evans Trio recording, “Free Fall” features stellar solos by both Hetko and Syracuse.

“Captain of Sinking Ship,” a 13 minute long odyssey composed by Nick Hetko imbued with all of the passion and intent that you would want from a classical-infused post-bop composition, a virtuosic melody played by Hetko (and, at times, doubled by Syracuse) is coupled with a masterful use of dynamics by the ensemble.  The track features a section of stunning improvisation by Siegel over some wildly syncopated hits executed by Hetko and Syracuse. Alongside the dazzling original compositions which grace this album, sits two arrangements of jazz standards “Oscar’s Boogie” (Oscar Peterson) and “I Fall in Love Too Easily” (Jule Styne).  “Oscar’s Boogie” sheds light on the trio’s facility in a more traditional context– and demonstrates just how deep the ‘pocket’ between long-time collaborators Siegel and Syracuse.  “I Fall in Love Too Easily” is filled with a humanity and grace that can only be compared to that of the woman whom this album seeks to honor–Dr. Lee Shaw.  “We hope this music reminds you of our friend and, if she is new to you, causes you to seek out her work.” Says Siegel,  “May she continue to inspire us all to live with and for passion.”

More about the trio:

Pianist/Composer Nicolas Hetko is an award winning pianist and composer.  He has shared the stage with the likes of James Moody, Matt Wilson, Chris Potter, Buddy Guy, and Dave Holland at countless clubs and concert halls around the world.  He was the grand prize winner of the Six String Theory Competition in 2016, went on tour with Lee Ritenour, and recorded a track for Lee’s upcoming album.  He holds two ASCAP Jazz Composer awards and three awards from Downbeat Magazine for his compositions and performances.  Before the age of 18, Hetko was selected for the Betty Carter Jazz Ahead Residency, Brubeck Jazz Colony, and the Gibson/Baldwin Grammy Jazz Ensemble.  He was a Grand Finalist in the Nottingham International Jazz Piano Competition and the Jacksonville Jazz Piano Competition, and was a recipient of the prestigious Stamps Scholarship at the University of Miami.  Nick Hetko now resides in New York City where he performs and records regularly with a variety of artists spanning an array of different genres as well as leading his own trio, Three Leaf.

Bassist/Composer Rich Syracuse has been a mainstay on the New York area scene for more than three decades.  While performing at an early age in New York City, he was the winner of the prestigious Congress of Strings Award.  He went on to receive his Bachelor of Music degree from Manhattan School of Music in New York City. Syracuse has performed with Mose Allison, Kurt Elling, Dave Liebman, Brubeck Brothers, Warren Bernhardt, Sumi Tonooka, David Torn, Mike DeMicco, Pete Levin, Sam Morrison, Bernard Purdy, Vic Juris, Dave Stryker, Chuck Lamb, Jeff “Siege” Siegel, Dena DeRose, John Medeski, Michael Mussilami and Ale DeMogli.  Rich has been the long time bassist for Jazz pianist Lee Shaw for 25 years until her passing. Rich is the Professor of String and Electric Bass at Skidmore College, Saratoga, New York, Hotchkiss School in Lakeville, Connecticut and The State University of New York at New Paltz.

Drummer/Composer Jeff “Siege” Siegel is a veteran of the New York Jazz scene and has worked with a virtual “who’s who” of artists. He came onto the New York scene in 1980-83 as a member of legendary multi-instrumentalist Arthur Rhames’s quartet.  After six years with the group Second Sight, which featured trumpeter Dave Douglas, Siegel became a member of the Sir Roland Hanna Trio from 1994-’99.  From the years 1990 – present he has co-led several touring ensembles as well as leading The Jeff “Siege” Siegel Quartet.  Simultaneously, from 2001 – 2015 Siegel was also a member of the Lee Shaw Trio from whom he also produced several cds and a dvd.  As an educator, Siegel is a faculty member at The New School for Jazz and Contemporary Music, Western Connecticut State University, and The State University of New York at New Paltz.  Siegel’s diverse career has also led him to perform and/or record with legends such as Ron Carter, Kenny Burrell, Jack DeJohnette, Pat Metheny, Benny Golson, Frank Foster, John Medeski, Stefon Harris, Kurt Elling, Ravi Coltrane, John Medeski, Dave Liebman, Pete & Tony Levin, Steve Turre, and many others.  His touring has also led to performances and clinics throughout the United States, South America, China and Canada, Japan and South Africa.  Siegel will return to Africa this June, 2019 to perform and teach with his group at the Standard Bank Jazz Festival in South Africa and perform for the US Embassy Eswatini at National Day festivities.