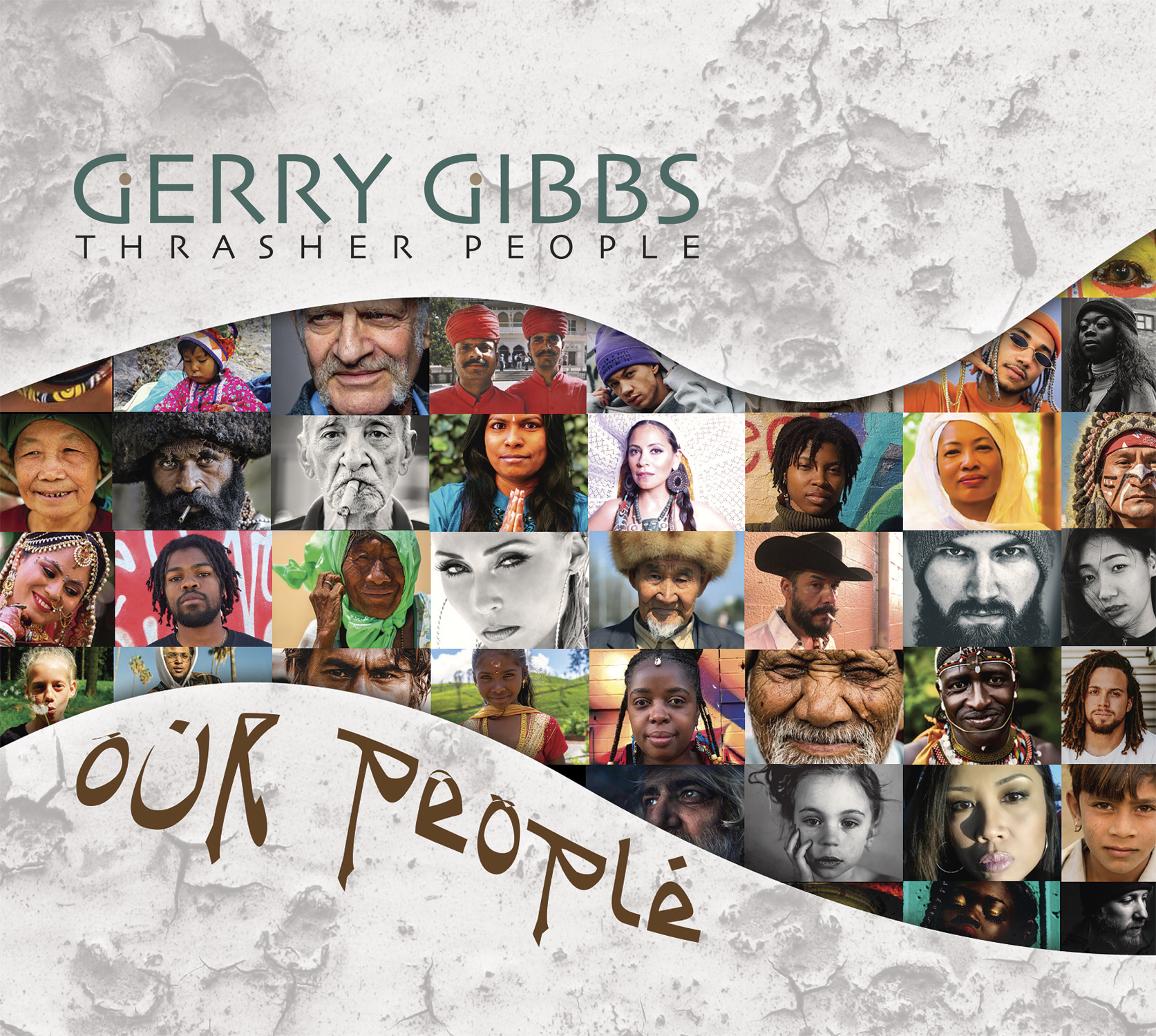 Gerry Gibbs’ Sonic Masterpiece Our People
to be Released on June 7, 2019 on Whaling City Sound

“[Our People] sounds like the soundtrack to the heavens opening up the gates! My brother Gerry is always pushing the envelope and being unapologetically himself!” – Robert Glasper

“It’s a beautiful journey and a really enjoyable listen… very well thought of and fun!” – Thundercat

Whaling City Sound is pleased to announce the June 7th, 2019 release of Our People, the 12th album as a leader from renowned drummer/composer Gerry Gibbs. With the commercial success of Gibbs’ last four solo records (all of which reached #1 on the international jazz radio Jazz Week charts), Gibbs took some advice from legendary pianist Billy Childs who simply asked Gibbs “Why don’t you make your next album doing whatever you want?”  With this ideology in mind, Gibbs recorded an epic, genre-defying masterwork unlike anything the multi-instrumentalist has ever produced before. The result is a magnificent sonic tapestry that pays tribute to our worlds’ many cultures and people over the course of 19 compositions.

Our People sounds like a full orchestra but is in fact the work of five gifted multi-instrumentalists, two of which are part of Gerry’s versatile Thrasher People Band. Acting as the principal soloist on the album, Alex Collins plays several keyboard parts as well as the marimba, vibes, soprano and alto saxophone, acoustic guitar, accordion, lead and background vocals and percussion. Gianluca Renzi performs all bass and string parts as well as background vocals and miscellaneous percussion. Gerry himself recorded all percussion parts (drum set, congas, timpani) as well as auxiliary percussion, glockenspiel, electronic soundscapes, keyboards and some vocals. In addition to composing and performing on Our People, Gibbs engineered and mixed the tracks himself. Rounding out the group are two very special guests: Mayu Saeki, who performs all woodwind parts, vocals and percussion, and Kyeshie Gibbs, who, alongside Saeki and Collins, contributes the majority of the vocal parts with some percussion.

Extraordinarily, these five artists are responsible for a total of 40 instruments on Our People. A true labor of love, Gibbs spent two consecutive 16-hour days composing and arranging all 19 compositions for different instruments, including an impressive vocal choir.

While Our People harkens back to the classic jazz-rock albums created by Chick Corea in the late 70’s, the influences present run the gamut.  “We all channeled all the people that we, collectively, have known from all over the world. We were influenced by everyone’s different ethnicities, heritages, life experiences, culture, and customs, as well as the time periods they came from,” said Gibbs. In short, Our People is a celebration of diversity, and the many influences that are reflected within the jazz idiom.

Our People pays homage to artists who have brought their own singular sound to the artform. Dedications include:

Additionally, one can’t help but hear the influence of iconic vibraphonist Roy Ayers in the serene vibes solo section in “Scene 3 (Music From the Universe),” and the funky HeadHunters influences on “Scene 6 (The Streets).”  The title track: “(Scene 4) Our People,” features a virtuosic vibraphone melody expertly performed by Collins.  Steeped in metric modulation and intense polyrhythmic interplay, the intensity cannot be understated. Kyeshie Gibb’s vocals impress, driving the finely tuned operatic harmonies over the rhythmic invention of the stellar rhythm section.  The amalgamation of styles and influences create a universally significant sound that seems to transcend genre.

While paying homage to an array of living legends of the artform, and exploring musical influences from around the globe, Gerry Gibbs’ new album makes an important statement about unity and the human condition, and reminds the listener that we should view all people as “Our People.”

Gerry Gibbs is a Grammy nominated Drummer, Producer, Band Leader, Composer & Arranger. Gibbs has released 12 albums as a leader.  His first, back in 1996, Gerry Gibbs Sextet – The Thrasher featured saxophonist Ravi Coltrane with Quincy Jones as Executive Producer and his second release First Visit, with the Third Trio From The Sun, featured 7-time Grammy winning producer Greg Kurstin (producer of Adele’s megahit “Hello”). More recently Gibbs released Gerry Gibbs & The Thrasher Dream Trio, We’re Back and Live In Studio which featured Jazz luminaries Ron Carter & Kenny Barron. These celebrated trio recordings featured many special guests including Cassandra Wilson, and Roy Hargrove.  In 2014 and 2015, all 3 trio recordings topped the National Jazz Radio Charts; spending 15 weeks between the three CD’s at #1 while The Thrasher Dream Trio received a Grammy nomination in 2014. In November 2015 The Gerry Gibbs Thrasher Dream Trio once again returned to #1 on the JazzWeek Jazz Charts as the most played Jazz CD across the country for several weeks.  After performing with this legendary trio, Gibbs created the Thrasher People Band with the release of the double CD Weather or Not, that featured Gibbs’ acoustic jazz arrangements of Weather Report compositions as well as original material.  Regarding the group’s seminal project, Wayne Shorter, co-founder of the legendary Weather Report exclaimed, “Nice to hear graphically arranged material of Weather Report. Keep up with your creative mission!” Gibbs is excited to continue his creative mission with the Thrasher People Band with the upcoming release of Our People.