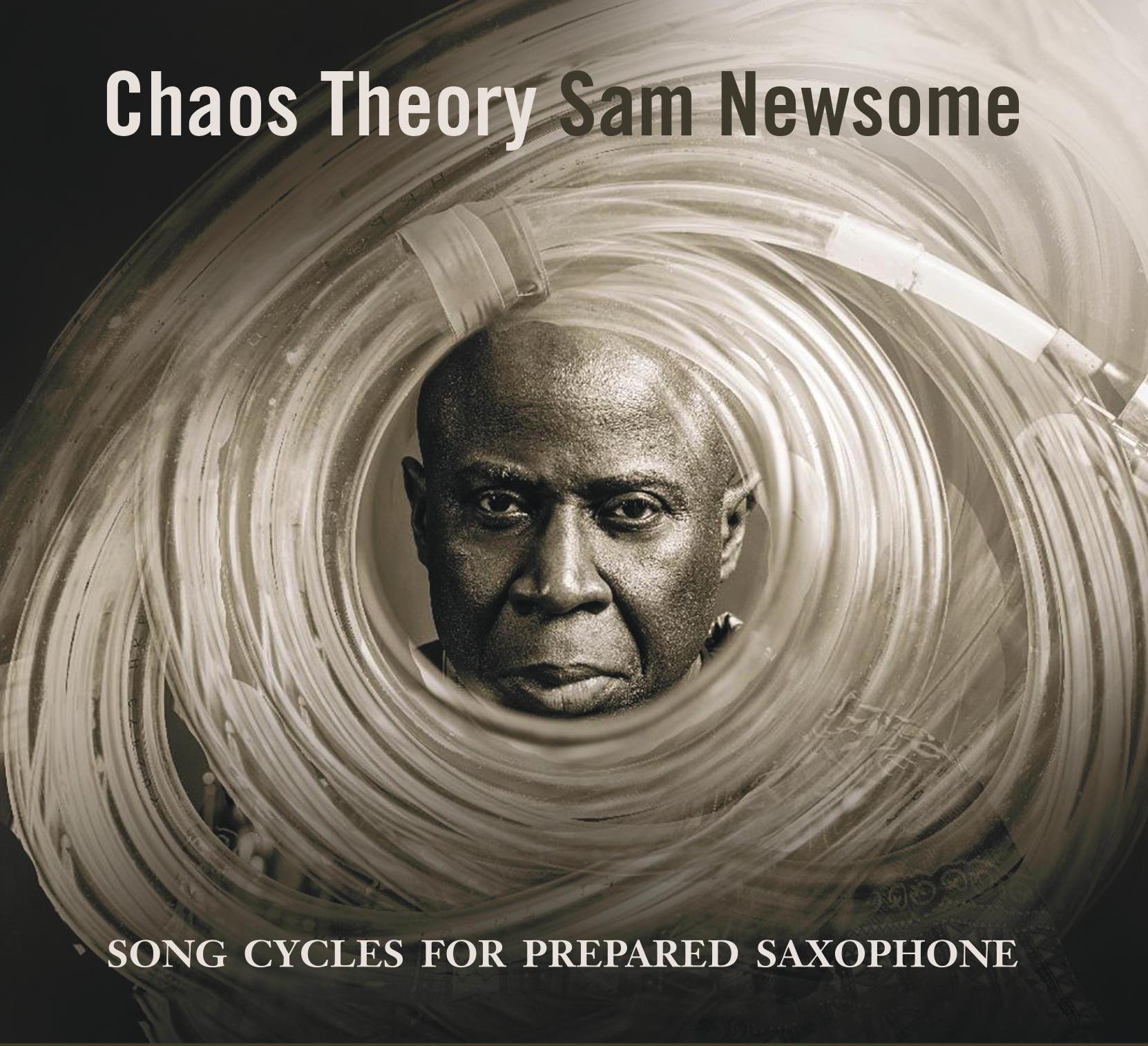 Soprano saxophonist Sam Newsome is proud to announce the June 3, 2019 release of his new solo saxophone recording, Chaos Theory: Song Cycles for Prepared Saxophone. This 15-track collection of original tunes appeals to anyone willing to immerse him or herself in what’s before them: Newsome’s innovative approach to the soprano saxophone and contributions to the solo saxophone canon.

While the album is quite obviously a result of Newsome’s unapologetic desire to delve into the sonic potential of his instrument, the saxophonist’s primary concern, first and foremost, is listenability. Actively in search of creating music that is both fresh and relatable, Newsome’s sound palette coddles the ear as it challenges the mind.

“There’s noise, grooves, pretty melodies, and sometimes straight up craziness. But at the end of the day, what I hope you hear is music.”

Some of the tracks on Chaos Theory feature sounds familiar from previous Newsome records—layered tracks, chimes hung from the horn, altered brass mutes fitted into its bell, multi-phonics, flutter and percussive slap tonguing, micro-tones, air sounds and hisses, and various forms of acoustic sound manipulation. However, for this new record, Newsome has augmented his soprano with plastic tubes extending the expanse between neck and mouthpiece – elongating the sound waves emitting from the horn and deepening its range by two or more octaves.

The seemingly effortless interplay between appeal and avant garde, evident in Sam Newsome’s compositions, is a rare combination. While instrument preparations and extended techniques have become the lingua franca of improvised music, Newsome does it with an uncanny level of control – his music never sounds chaotic. Aware of the fine line that exists between stating one’s piece and self-indulging, Newsome believes “that musicians can push the envelope as far as their imaginations will allow and, consequently, their creative endeavors will maintain a lot of its interest, as long as it does not linger too long”. Upon heading into the studio, Newsome’s approach is simple: quit while ahead – concision is key.

Sam Newsome sees himself as a visual artist who paints with notes and sounds rather than shapes and colors. “My music,” says Newsome, “is a type of improvisatory art music in which jazz functions more as a resource than a musical genre to be interpreted with stylistic specificity. While many who play experimental music consider themselves avant gardist, I consider myself an avant traditionalist.”

While Newsome’s approach is unorthodox, it has proven very fruitful, both musically and critically. Steve Lacy once said that the “potential of the saxophone is unlimited.”  Newsome’s Chaos Theory proves this time and time again.

New York-based saxophonist and composer Sam Newsome works primarily in the medium of solo saxophone, an approach for which he gained world-wide critical acclaim with the release of his 2009 recording Blue Soliloquy: Solo Works for Soprano Saxophone, which received a five-star review in Downbeat magazine. Newsome has also released six critically acclaimed solo saxophone albums including Sopranoville: Works for Prepared and Non-Prepared Saxophone (2017); The Straight Horn of Africa (2014); The Solo Concert: Sam Newsome Plays Monk and Ellington (2013); and The Art of the Soprano, Vol. 1 (2012). Jazz writer Ed Enright, from Downbeat Magazine, wrote that Mr. Newsome’s The Straight Horn of Africa was “a modern masterpiece.” An associate professor of music, as well as music program coordinator at the Brooklyn campus of Long Island University, Newsome often performs solo saxophone concerts around New York and across the country as well as leading his own trio with bassist Hilliard Greene and drummer Reggie Nicholson. Newsome is a frequent collaborator with drummer Andrew Cyrille, vocalist Fay Victor, pianist Jean-Michel Pilc, saxophonist David Liebman, and pianist Ethan Iverson.