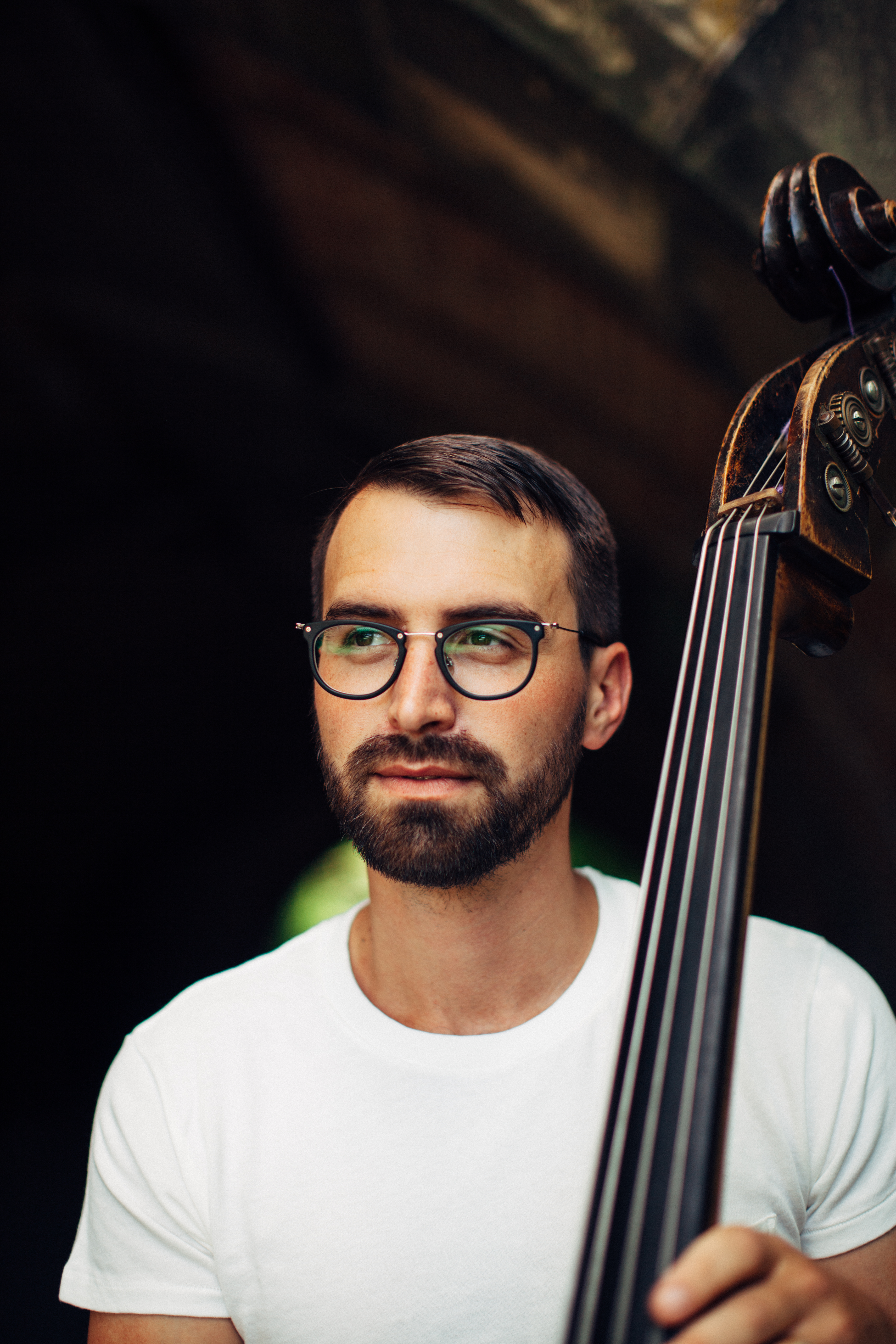 When composing, Jake Leckie follows a concept known as “MAYA,” which stands for “most advanced yet acceptable” and which would seem to be apply equally well to the result of that process, The Abode. The Boston-born bassist’s recording locates itself solidly within the acoustic jazz tradition yet never sounds less than current, its broad stylistic scope reflective of his “polyphonic openness to anything and everything.” Joining him on the project are trumpeter Kenny Warren, pianist Sebastien Ammann, and drummer Nathan Ellman-Bell, plus a number of guests.

Initially intended as a quartet album, The Abode developed into a considerably larger project. Along with the three just mentioned, saxophonist Caroline Davis, organist Ivey Paige, singer Alexis Morrast, percussionist Daniel Prim, tambourine player Brenda Trotter-Workman, and string players Andrei Matorin, Tomoko Omura, and Agustin Uriburu appear on selected tracks. Besides the leader, eleven musicians contribute to the eight tracks, but, as the composer, bandleader, and arranger, The Abode is very much Leckie’s baby. That said, his partners add greatly to the album’s impact, from the moment the strings inaugurate the opening title track to the moment Davis and Warren elevate “Perseverance” with chorale playing at album’s end.

The bop-inflected swing of “The Abode” gives the album jump from the drop, with a singing trumpet theme and punchy solo statements by the leader, Ammann, and Warren. Fans of Mingus and Haden will also likely cotton to Leckie’s playing, especially during those moments where solo spotlights surface. He’s on his own at the start of “Metis,” for example, before the others enter to deepen the cut’s slow blues feel and amplify its funky flavour. As a composer, he’s got a good ear for melody, but he excels as effectively in calling forth quality performances from his bandmates. In that regard, Warren and Ammann bring authoritative performances to the date, and Ellman-Bell’s no wallflower either. He and Leckie animate the brisk “Bam Bam” with drive, inciting a bravura turn from the trumpeter and a rollicking, high-wire one by the pianist. All involved are just as capable of playing sensitively when the music calls for it, a case in point the ballad “Mutuality.”

With Leckie having recently relocated from New York to Los Angeles, migration and home are recurring focal points. “After the Flood” addresses the dislocation residents of Houston and Puerto Rico experienced in the wake of natural disasters, while the title of “Negev” references Abraham’s journey through Israel’s Negev Desert upon being banished from Egypt; in this case, however, your attention likely will focus less on that detail and more on the music’s Mingus-styled swing.

In the album’s second half, Leckie takes things in a few unexpected directions. He heads to church for “Morning Sound,” whose gospel character’s enhanced by the presence of Paige and Trotter-Workman (both participate, apparently, in the weekly services at the Parkchester Baptist Church) and embraces vocal balladry in “After the Flood,” a sultry R&B-sweetened song that’s elevated by a lovely vocal from Morrast and flugelhorn solo by Warren. Such left turns notwithstanding, The Abode positions itself firmly in the acoustic jazz tradition. It’s no less satisfying for doing so, however, especially when the set-list encompasses bop, gospel, R&B, and ballads.