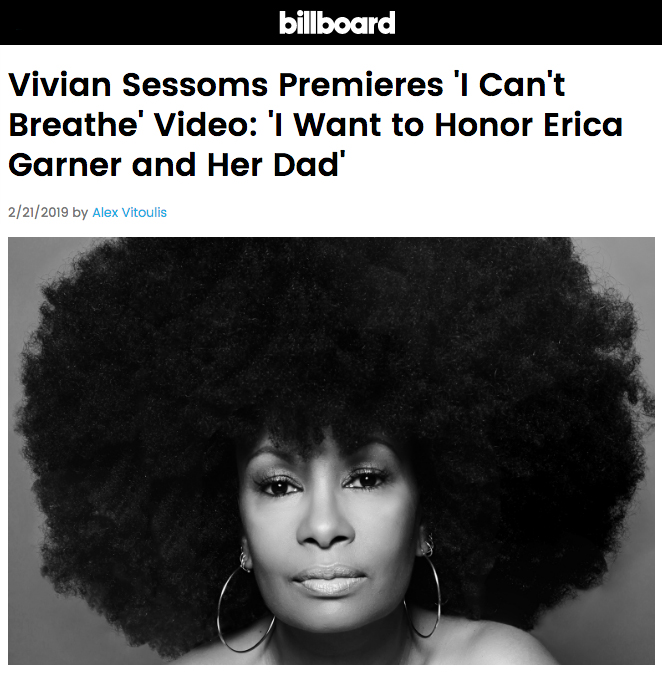 Harlem, New York native Vivian Sessoms might not be a household name. But you’ve probably heard her voice or seen her live—and not even known it.

Sessoms has provided vocals on records and/or tours for such stars as Michael Jackson, Stevie Wonder, Donna Summer, Sinead O’Connor, Diddy, Ryuichi Sakamoto, Taylor Dayne, Rob Thomas, Joe Cocker and P!nk. With such a stellar and diverse resume, it’s no surprise at how powerful and masterfully Sessoms’ voice connects with any song she sings.

In conjunction with Black History Month, Billboard presents the video premiere of Sessoms’ new song, “I Can’t Breathe (For Erica),” featuring jazz guitarist Mark Whitfield. The track is the first single from the singer’s Life II album, due May 17 on Baby Buddha/Ropeadope. Sessoms wrote the song with Shedrick Mitchell and co-producer and co-directed the video with Epic “DC” Coles, who has worked with Jay-Z among others.

The song originated as a response to the racial injustice and violence confronting the black community. Sessoms “wanted to show what happens in any family when one member is taken away. The whole family struggles with that loss, especially when it’s unexpected or due to violence. The whole family is very often changed forever.”

Following the 2014 death of Eric Garner, who was put in a chokehold by an NYPD officer, Sessoms says she “cried for what happened for his family.” It was the same way she reacted to what happened to Rodney King, Michael Brown, Sandra Bland and Freddie Gray, all of whom were also involved in controversial interactions with authorities. “A day or two after watching the Garner incident,” says Sessoms, “I started to write down my thoughts.”

She started putting together the Life albums in 2014, the first of which was released last November. “In the back of my mind,” recalls Sessoms, “I thought, maybe just maybe, I’ll do something with those jumbled words and incomplete sentences.”

Those words formed a compelling narrative after Sessoms read about Erica Garner seeking justice for her dad. “I listened to her speak,” says Sessoms, “and afterward I think I kind of finished it for her. I was awestruck by Erica. Watching her made me incredibly proud of her strength and resilience in the face of such a heartbreaking tragedy.”

Praises Whitfield, the video’s featured artist and a veteran of Billboard’s jazz charts for over three decades, “Vivian possesses a rare gift: the ability to transcend genres and moments in time by using her timeless vocal stylings to express deep emotion and sentiment that immediately translates to everyone. I’m ever so proud to have played a small role in helping her deliver this latest message of protest in the form of hope for our future as a whole and freedom from despair as a people.”

Adds Sessoms, “I want to honor and remember Erica and Eric Garner—and so many others.”