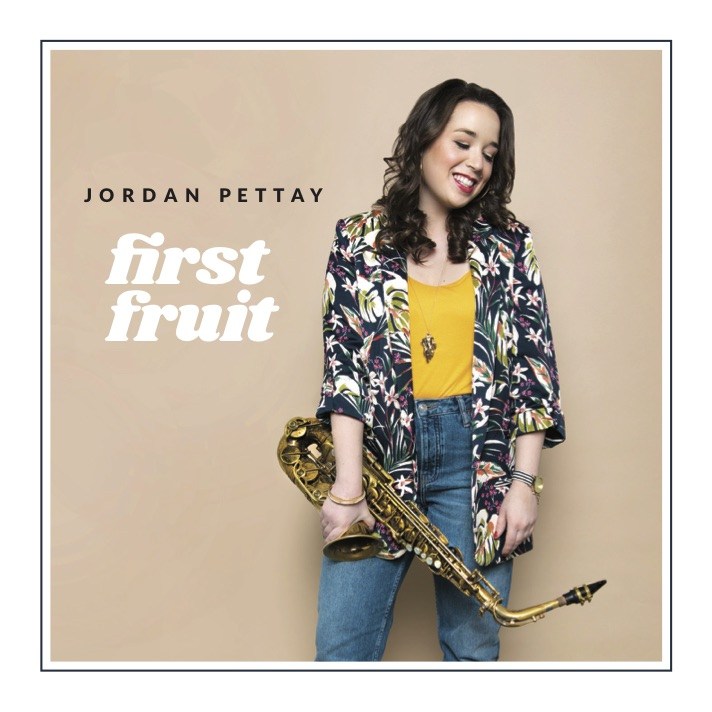 Accomplished saxophonist and composer Jordan Pettay is proud to announce her arrival with the release of First Fruit, on award-winning trombonist and composer Nick Finzer’s record label Outside In Music. Co-produced by Christian Sands, who also lends his talents on piano and rhodes, First Fruit is presented by a stellar line-up which includes Luke Sellick on bass and Jimmy Macbride on drums. Instantly recognizable by her sophisticated and spiritual sound, Jordan Pettay collaborates with this esteemed quartet to bring you First Fruit; A musical melding of the Juilliard graduate’s life, faith and artistic influences which span jazz, gospel and R&B. With the thematic focus of gratitude and love, First Fruit aims to uplift listeners, and create an atmosphere for them to connect with God and experience His presence. Jordan will be celebrating the release tonight at Ginny’s Supper Club in New York.

On this, her debut album, the New York City-based saxophonist and composer has carefully selected, arranged and recorded nine tracks, which vary between classic hymns to gospel songs to original compositions, all sharing a common purpose to evoke a spiritual connection with each individual listener.  On a personal level, this album is Pettay’s own response to God’s call,

“You shall bring the very first of the fruits of your soil into the house of the Lord your God.”

As a child growing up in Ft. Worth, Texas, Jordan drew early inspiration from the classic jazz recordings of Charlie Parker and Duke Ellington, as well as the gospel music she was immersed in. Seeking to attain the musical depth of the jazz masters while maintaining the raw and sacred feeling of the church, Pettay manages to showcase all of her influences from jazz to gospel to R&B on First Fruit. The album opens with “Whatever Happens”, an original tune which showcases the saxophonist’s appreciation for jazz star Wayne Shorter. Reminiscent of Shorter’s “Speak No Evil”, “Whatever Happens” is opened by the rhythm section, which shines over a static melody played by the horns. The contrasting bridge features a hard-hitting melody and composite rhythm before the track returns back to the opening “A” section. The album includes an array of hymns and gospel songs, including “I Am Thine O Lord”, “I Exalt Thee”, “I Surrender All” and “Are You Washed in the Blood?”, each exhibiting Pettay’s strong faith. The fourth track, “You Make Me Feel Brand New”, originally composed by R&B group The Stylistics, delivers a message of a love that anchors us, sustains us, shapes us, and gives us new hope and meaning. While “For Wayne” is an original track based on the chord changes of Jimmy Rowles’ “502 Blues”, which Wayne Shorter recorded on his album Adam’s Apple, Pettay’s take on “Straight Street” pays homage to another one of the saxophonist’s jazz influences: John Coltrane. Reminiscent of the biblical account of Saul’s conversion on the Road to Damascus,  Pettay’s interpretation of this Coltrane tune displays the influence, in both musicality and faith that she has taken from the jazz legend.

The title track mirrors the fundamental message Pettay conveys throughout this album as a whole. Spiritually, the term “first fruit” most commonly refers to the first produce of a season, given as an offering to God. This debut album from the talented saxophonist serves as her personal contribution – her own first fruit – to God. In presenting this collection of tracks as a dedication to her beliefs and her God, Pettay hopes that this music will create a common environment for her listeners in which they can each establish and build upon their own individual spiritual presence.

MORE ABOUT JORDAN PETTAY
Jordan Pettay is a jazz saxophonist, composer and teacher, who has collaborated with many of the world’s premier jazz artists including Herbie Hancock, Christian McBride and Terence Blanchard. Jordan attended the Booker T. Washington Performing Arts High School in Dallas, and in 2008 received a full scholarship to attend The Juilliard School in New York City. At Juilliard, Jordan was mentored by iconic New York saxophonists Ron Blake and Steve Wilson while traveling Europe, South America, Asia and Australia as a guest clinician and performer. She graduated with her Master’s degree in 2014, and now resides in Harlem’s historic Sugar Hill neighborhood. She appears regularly as a freelance artist, educator and leader of The Jordan Pettay Quartet at top NYC venues including Dizzy’s Club Coca Cola, The Blue Note and Smoke Jazz Club.