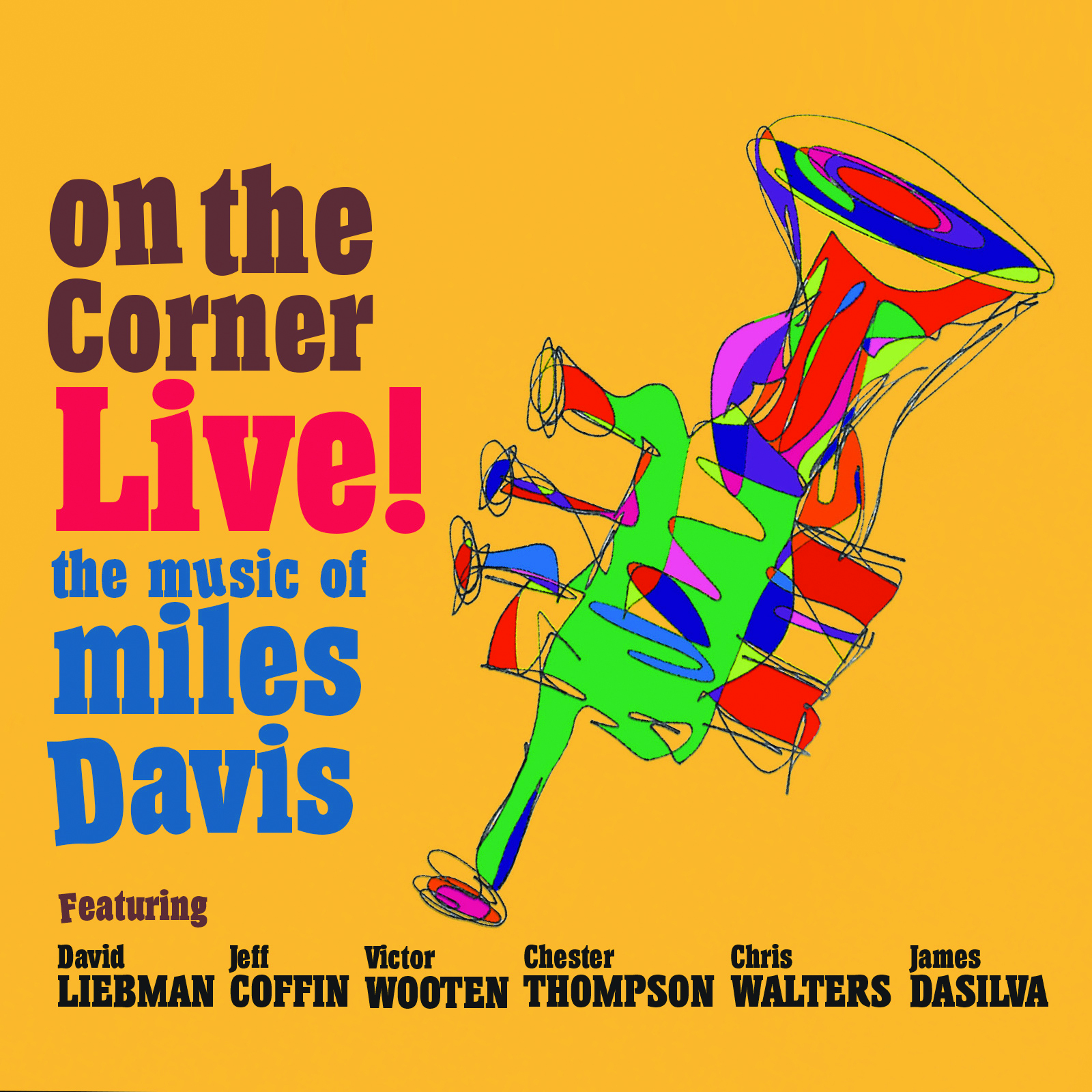 Ear Up Records is proud to announce the March 1, 2019 release of On The Corner Live: The Music of Miles Davis featuring NEA Jazz Master David Liebman alongside Grammy-winning saxophonist Jeff Coffin. Rounding out the powerhouse ensemble is bassist Victor Wooten, drummer Chester Thompson, guitarist James DaSilva and Chris Walters on keyboards. Recorded live in 2015 at the Nashville venue 3rd & Lindsley, On The Corner Live revisits Miles Davis’ prolific electric period in a way that has never been heard before.

When it comes to Miles’ rich electric period, there is no musician more qualified to fill the front line than David Liebman. The saxophonist famously began his musical relationship with Miles in the summer of 1972 when he participated in the recording date that would birth On The Corner. Liebman’s first gig with Miles was January 12, 1973 at the Filmore East, thus beginning a year and a half long stint in one of the most influential bands of all time.

“On The Corner has been sampled, copied, discussed and adapted by several generations of musicians, most not even alive when the music was created,” says Liebman. Released 47 years ago, On The Corner remains a cornerstone of Miles’ career that ushered in a new period in popular music. Perhaps then it is especially apropos that On The Corner Live features this material reimagined by six especially eclectic and versatile musicians who often defy genre and are constantly pushing music forward in creative ways.

On The Corner Live is the brainchild of Jeff Coffin who spearheaded the project from its inception to conclusion. Coffin is an undeniable musical force. When he is not on the road with the Dave Matthews Band (of which he has been a member since 2009) or touring with his critically acclaimed group The Mu’tet, Coffin is making things happen in Nashville. When Liebman paid the city a visit in 2015, Coffin booked a gig that he knew was going to be special. It was Coffin who assembled the musicians and ensured the performance was properly recorded and produced.

To pay homage to the Prince of Darkness, Coffin called a who’s who of Nashville’s top players who were not just superb musicians, but stylistic chameleons (very much like Miles was). Few bassists can hold a candle to Victor Wooten, who has rightfully been called “the Michael Jordan of the bass”. A founding member of Bela & and the Flecktones, Wooten has played with just about everybody from Chick Corea and Stanley Clarke to Prince and Bootsy Collins.

Chester Thompson is a legendary drummer who has influenced over three decades of music and musicians. During the same period that Liebman was performing with Miles, Thompson was a member of Frank Zappa and the Mothers of Invention (1973-1975). While Thompson is perhaps best known as the drummer for Genesis (1977-1992, and then again in 2007 for the Turn It On Again tour), he has led the Chester Thompson Trio since 2011. Capping off the rhythm section is consummate pianist Chris Walters, whose credits include Peter Mayer, JD Souther and the Jeff Coffin Mu’tet and up-and-coming guitarist James DaSilva.

Predictably, the concert was a rousing success. Says Coffin on the evening:

“The club sold out and there was a line, pardon the pun, on the corner stretching around the building! This was the new Nashville showing up in droves for this band and this music. The place was electric and Dave and the rest of band were smoking! For me, getting to stand beside one of my musical heroes was something I don’t really have words to explain how I felt. I think we all felt that we had a very special group of artists together and everyone played at the highest level. Listening, reacting, weaving, laying out, jumping in, approaching things from different musical and spiritual angles, communication at the highest level of intention. It was beautiful! The audience was incredible and so supportive of this far out music we were making and I was proud of Music City for being there for us. It meant a lot to all of us.”

Finally, nearly four years after that unforgettable night, On The Corner Live will be available worldwide via Coffin’s independent label Ear Up Records on March 1st. The 12-track album features familiar tunes from the 1972 recording (“Black Satin”, “On The Corner”) as well as cuts from Live Evil (“Selim”) and In A Silent Way, among others. “The songs chosen are not all from the original recording, but overall the material I chose represents a look at the electric period of Miles Davis which certainly changed the course of pop music and jazz forever,” says Liebman.

Inspiration comes in many forms and in many shapes, sizes, colors and locations. This particular night in Nashville, it came On The Corner.