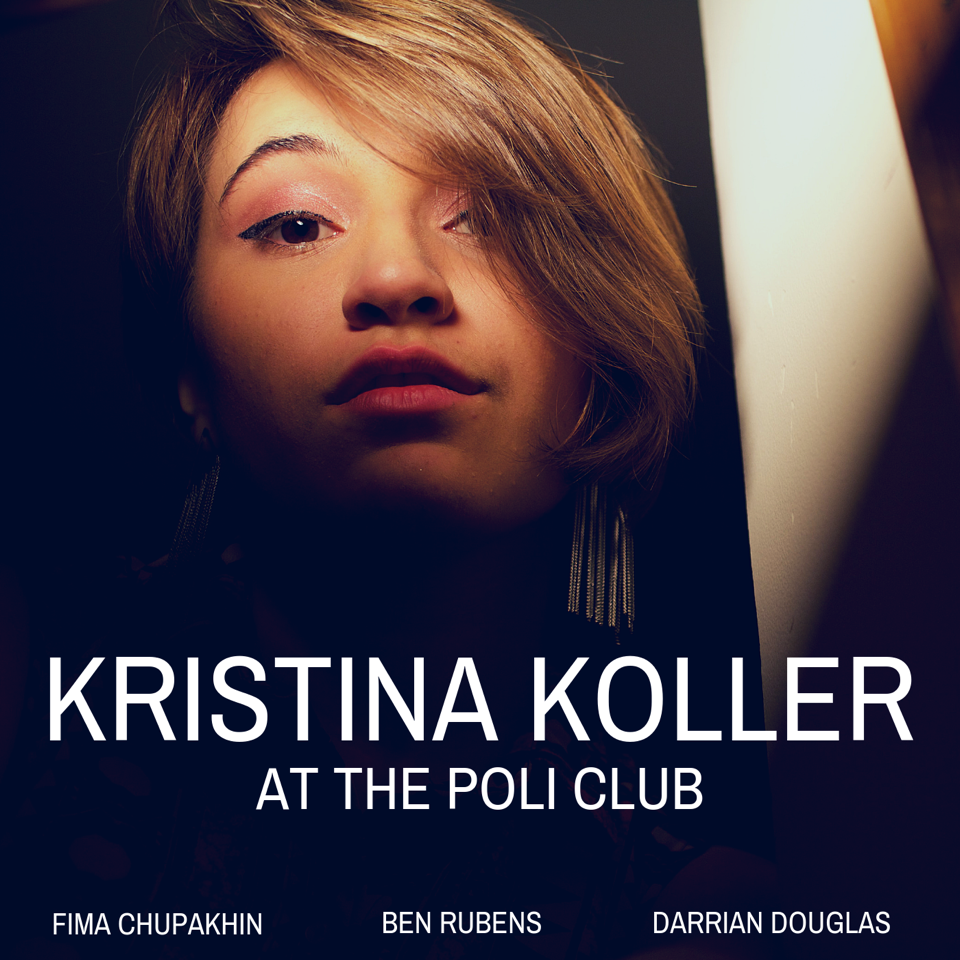 Just one year after releasing her debut album Perception to wide-acclaim, progressive jazz vocalist Kristina Koller is proud to release At The Poli Club, her live recording debut. Featuring Koller on vocals, alongside Fima Chupakhin on piano, Ben Rubens on bass and Darrian Douglas on drums, At The Poli Club reinterprets and reimagines a collection of four classic standards. Spontaneously recorded during one of the vocalist’s recent shows at the Waterbury, CT club, this live EP presents Koller in her truest and purest form yet. Throughout her performances in the past year, Koller has continued to celebrate the originals heard on Perception, rotate throughout re-envisioned jazz gems and hone in on her own new and fresh arrangements.

Mike Gow, the artistic director at the Poli Club made the decision to record the young songstress. The result was a single WAV file, unpolished, with no overdubbing or studio frills. What is on the recording is how the music sounded that night at the Poli Club. The sound is unadulterated and a throwback to old live jazz recordings done without ‘touching up’ in the studio.

Koller opens the EP by remembering the late, great Nancy Wilson with her take on “Save Your Love For Me”. As a vocalist, Koller appreciates how Wilson didn’t sound like a typical jazz singer – “she phrased songs uniquely as herself, she picked tunes based on all of the heartache she went through and she never was one to stick to the typical way of looking at a jazz standard”, admires Koller. Both “Falling in Love With Love” and “I Didn’t Know About You” were added to the singer’s live repertoire, while she was browsing through an assortment of music books. In figuring out whether or not a tune sits well with her, Koller dedicates significant time and effort analyzing music charts, reading the lyrics and melody and hearing harmony. While “Falling in Love with Love” was the perfect tune to arrange in ¾, it was the melody and lyrics of Duke Ellington’s “I Didn’t Know About You” that captured Koller’s attention – “I always love to challenge myself to learn melodies that I find different.” The recording is drawn to a close with “What A Difference A Day Makes” – a favorite tune of Koller’s long-time bandmate and pianist for her Poli Club shows, Fima Chupakhin. The vocalist is always open to recommendations from her colleagues and this track was one that Koller instantly connected with. It’s a true example of how well her ensemble meld together and provide substantial support to her artistic direction.

“Kristina Koller has a fearless musical curiosity that leads her to blend all sorts of elements together into a variety of fresh sounds, and sing over them with complete assurance and ease.”
–Jerome Wilson, All About Jazz

Jazz artist Kristina Koller has developed quickly into a highly individual vocalist & songwriter. With the release of her debut album Perception, Kristina has established herself as one of the most exciting young voices in jazz. As a composer, Kristina melds diverse genres of music into her songs. While embracing standards and straight ahead jazz, Kristina arranges tunes in unique ways, knowing that adding to the legacy of jazz is much more important than recreating the performances of others. Kristina culled her musical chops in the NYC jazz scene, performing at venerable jazz haunts such as Smalls, Smoke, Minton’s, Mezzrow as well as The Apollo Theater. She was a featured Discovery Artist at the 2017 Mid-Atlantic Jazz Festival and her quintet were semi-finalists in the 2017 DCJazzPrix competition. Her music connects with new audiences outside of the jazz music circle, melding jazz, funk, R&B & alternative sounds into her arrangements and compositions. Kristina Koller is a very original contemporary jazz vocalist, one that anyone interested in jazz, or for that matter progressive music, needs to hear.