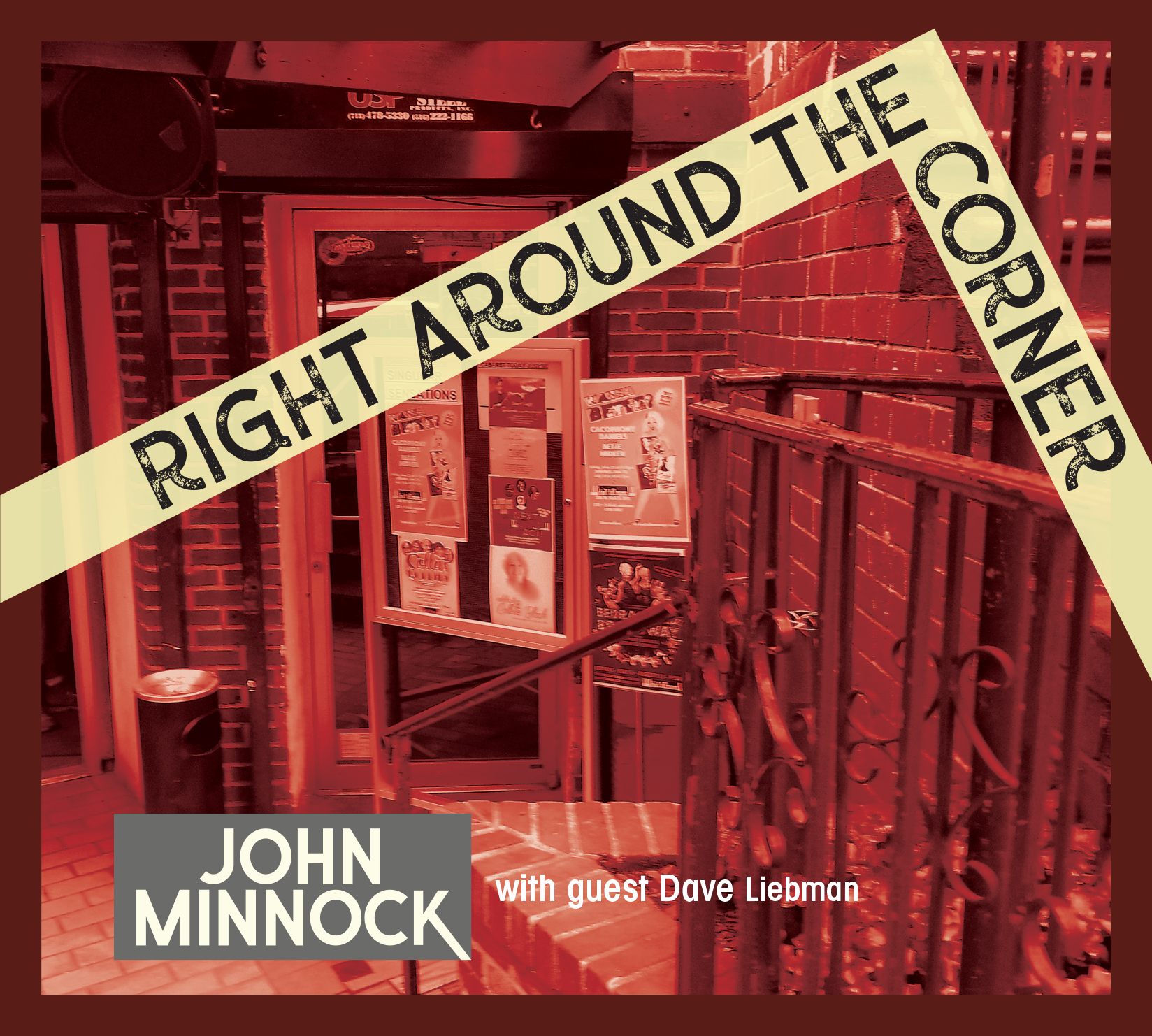 “Onstage and on record, John opts for a wide range of repertoire: Ellington might sit alongside Grace Jones, Billy Joel or Sam Smith in one of John’s performances. Indeed, at his best John makes a compelling case for celebrating all generations of the American Songbook.”
–  Seton Hawkins, Hot House

New York, NY — New breed vocalist John Minnock is thrilled to announce the release of his new album Right Around The Corner. On his sophomore effort, out November 6th, John presents jazz, blues and cabaret classics in a way that has never been heard before with the help of special guest, National Endowment for the Arts Jazz Master Dave Liebman on saxophone. John’s experiences as an openly gay man gives way to a unique perspective that is at once eye-opening, touching and down right fun. Supported by a stellar rhythm section including pianist/arranger Enrique Hanenine (whose latest album The Mind’s Mural hit #1 on the NACC Radio Chart) bassist Carlos Mena and drummer Pablo Eluchans, John’s new “gay-ahead jazz album” is a groundbreaker as it explores LGBTQ subject-matter in a jazz setting. John will celebrate the release of his new album on November 17th at the iconic Don’t Tell Mama in Times Square.

John Minnock’s first album, Every Day Blues, introduced his signature wit and candor as he explored the American songbook from the perspective as a gay man in today’s world. His long-running show of the same name, presented through the years at the Metropolitan Room, the Triad Theater and, most recently, Don’t Tell Mama, has been an audience favorite, attracting a diverse cast of attendees from inquisitive cabaret fans to serious jazz listeners. Right Around The Corner features a mix of material frequently performed at his live show (“Skylark”, “Moon River”, “I Love Being Here With You”, “You Don’t Know What Love Is”, “Do You Know What It Means to Miss New Orleans”) and impressive original compositions that tell stories of gay life that are seldom heard on the bandstand.

A stand out moment is John’s original composition, “Right Around the Corner”; the title being a play on the Mel Torme/George Shearing classic “Love is Just Right Around The Corner”. John’s lyrics were lifted directly from personal experience and offers plenty of nods to real life nightlife experiences in the New York City gay community. “Less so today, but in the past it was common for gay people to, when visiting a city, look for the neighborhood that designated LGBTQ and visit some or most or all bars there. This was a way to get to know the community in that city,” says John. John takes listeners through all of his favorite corners, many of which are home not just to him, but others in the gay community as well: Vodka Soda/Bottoms Up on 46th and 8th, Rise on 56th and 9th, Arriba Arriba on 51st and 9th, Don’t Tell Mama on 46th and 9th and Hardware and DBL at 48th and 10th. The song was also synthed, which is a nod to electronic music pioneer Wendy Carlos; a pioneer as well in gender re-assignment.

Another highlight is John’s interpretation of “New York, New York” by Jay Brannon (not the famous Kander and Ebb tune). The lyrics call back to “My Favorite Things”- specifically the version made famous by John Coltrane. “I thought of it as My LEAST Favorite Things about New York!” said John. Soprano saxophonist David Liebman, a jazz musician who is quintessential “New York” and is arguably the greatest living bastion of Coltrane’s sound, joins John here to dazzling results. “Liebman’s playing here invokes for me the bluesy black and white bankrupt world New York was in the 1960’s and 1970’s… I tried to adapt my vocalizing to match the players,” he said. Liebman joins John again on a superb version of “Skylark”. Performed often at his live show, the studio version gives new life to the stalwart melody with a jaw-dropping saxophone-vocal duo. John’s presentation of “Skylark” is painted by his experience workshopping it with the revered Lina Koutrakos.

Johns other originals, “Are We All Alone” and “Everything Changes”, tell different stories within the context of a gay relationship. The first deals with the challenges of a relationship without much experience or support from family or friends, and the second tells of a more mature relationship with all of its peaks and valleys. “There’s a section of happiness like an anthem, then a section of doubt and complication, maybe a bit neurotic (I call this ‘the Seinfeld section),” says John, adding that “most of the subject matter comes from issues and topics of the LGBTQ community”.

On Right Around The Corner, John brings a much-needed, fresh perspective to the vocal jazz genre. In John’s own words: “In writing the original songs, it became clear ‘it had to be jazz”. This genre offers the flexibility to fully express yourself (as Madonna might say). At one point in writing, I had a specific question and I asked Enrique “can I do this..?” and he responded “you can do anything, it’s jazz”’.