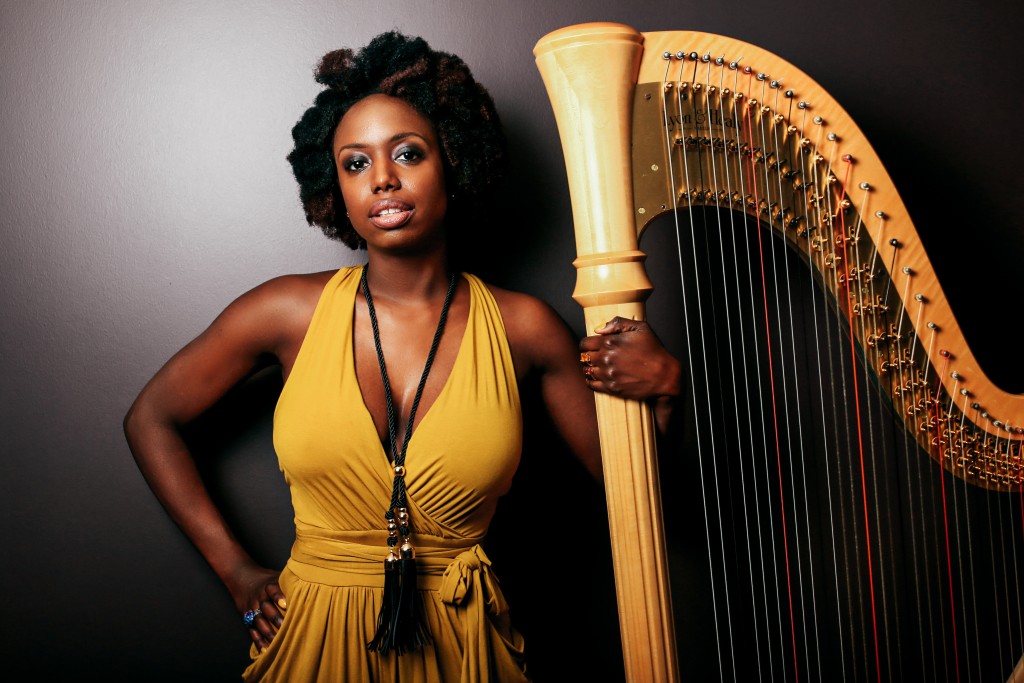 In its 12th year, Chicago’s Hyde Park Jazz Festival presented an almost preposterous amount of quality music on Sept. 29, day one of the two-day event that hosted scores of programs in about a dozen disparate venues.

The day commenced at 1 p.m. with Brandee Younger in the screening room of the Reva and David Logan Center for the Arts as she delivered a talk: “Transcendence: A Glimpse Into The Life And Legacy Of Alice Coltrane.” Though Coltrane was a fellow harpist who enthralled Younger as a child when she first heard “Blue Nile,” she also showed a vintage clip of Coltrane playing piano in the manner of her mentor, Bud Powell. Following this detailed appreciation came New York-based writer Nate Chinen, reading excerpts from his latest work, Playing Changes: Jazz For The New Century. Chinen picked the 1980s juncture at which Wynton Marsalis won both classical and jazz Grammys, and Herbie Hancock scored a hit with “Rockit” as a starting point to discuss the genre with local drummer/bandleader Mike Reed.

Reed entrenched his allegiance to art music and community development above commercialization, demonstrating this commitment later at the Logan in the company of a new septet that performed The City Was Yellow: The Chicago Suite. “I called it that so people would ask me why I called it that,” Reed later said.

The drummer long has had an unpredictable, visionary side to his thought processes, keeping him one step ahead. He corralled a group of younger musicians he’d barely, if at all, worked with before, including pianist Antonio Hart and clarinetist/saxophonist Hunter Diamond, to play compositions like Ed Wilkerson’s “The Big Dig” and Nicole Mitchell’s fiendishly serpentine “Navigator.”

Ryan Cohan’s commissioned project, Originations—a through-composed program expressing the confluence of his Jewish/Arabic ancestry, plus jazz and classical influences, in several movements—preceded Reed at the Logan and was equally fascinating. The ensemble featured saxophonists Geof Bradfield and John Wojciechowski, plus Tito Carrillo on trumpet and flugelhorn and Ahmad Jamal’s longtime bassist James Cammack, as well as the KAIA String Quartet. The music, despite its diverse parts, breathed beautifully with soul.

The Chicagoans, indeed, were notable for their restraint and knowing wisdom in Hyde Park, save for promising tenor saxophonist Isaiah Collier and his quartet, The Chosen Few, which, with unrestrained panache, positively disemboweled Joe Henderson’s challenging “Inner Urge,” sending it sprawling across the Midway.

The award for most brash performer, though, went to Christian Scott aTunde Adjuah, who might have stepped too far in interacting with an audience member at the West Stage. Pianist Lawrence Fields seemed to stiffen at Scott’s well-meaning onstage badinage, but there’s no doubting the trumpeter’s rapport with flautist Elena Pinderhughes.

In a charming moment, Scott waded into the crowd to gift a trumpet to a young hopeful he’d encountered on a previous visit, a child who had had the gumption to come forward wanting to play, yet didn’t possess an instrument. Such heartwarming encouragement of the next generation was echoed during a packed Logan performance, when singer Joan Collaso called for her tiny grandson who was in the crowd, a keen young drummer, to come play brushes behind her, a logical extension of Collaso’s role as director of a youth program that empowers young performers.

About 300 volunteers and several staffers are worth mentioning here, but it’s Kate Dumbleton and Judith Stein who warrant specific mention. Festival co-founder Stein is as gregarious as Dumbleton, artistic and executive director, is unassuming. Despite her low profile, though, there’s no doubting Dumbleton’s knack for programming inspired combinations.

Though Younger’s shimmering harp sound proved to be less vivid in the engulfing chancel of the chapel than in Union Church, Ravi Coltrane was able to gorgeously render the equilibrium inherent in his mother’s compositions—“Journey In Satchidananda” and “Rama Rama”—commanding admirable breath control in the reverberant space. His quartet, with energy-efficient drummer Jonathan Blake and deep-oak bassist Rahsaan Carter, moved through Alice’s compositions for 40 minutes, adding Charlie Haden’s “For Turiya,” and then, with Coltrane on soprano, “Untitled Original 11386” from the recently exhumed 1963 recording of Ravi’s father, John.

This concert in the chapel—with Ravi looking remarkably like his father—underscored his primary musical influence: his mother. DB