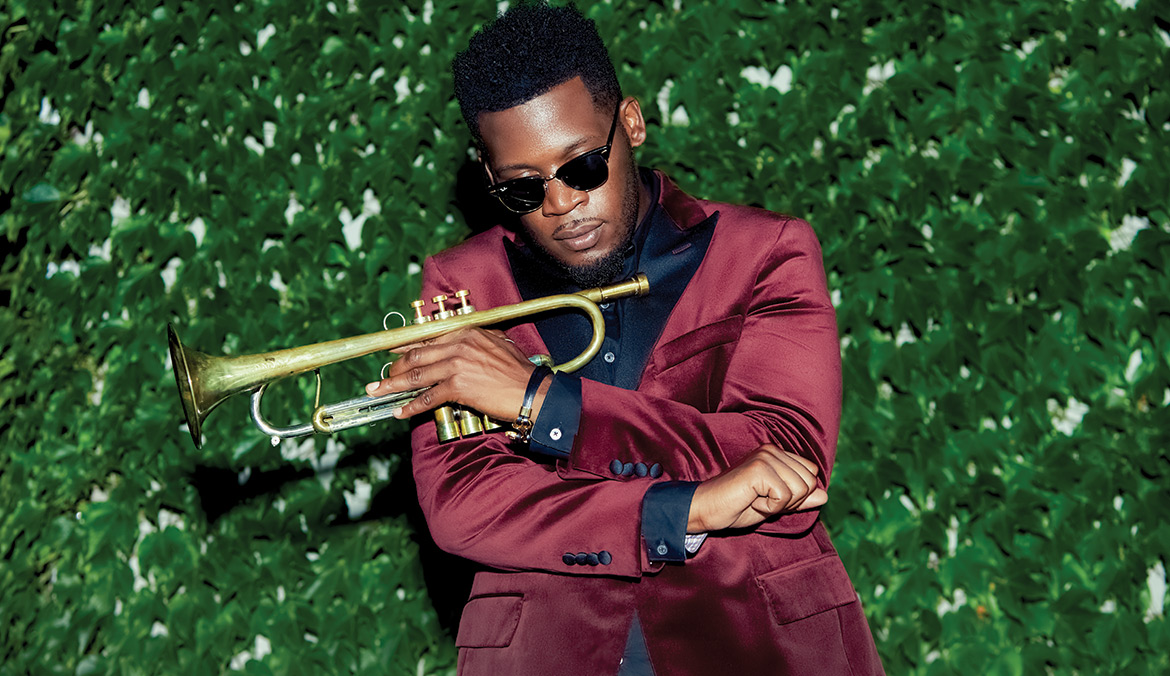 Listed by Rolling Stone as one of “10 New Artists You Need To Know Now”, the revolutionary Keyon Harrold is proud to close 2018 with the announcement of several performances and appearances! With dates in San Diego, San Francisco, New York, Seattle, Philadelphia, Paris, Israel and South Africa, the self-described “social music activist” and trumpeter will be joined by an alternating melting pot of internationally lauded musicians, including keyboardists Shedrick Mitchell and Brett Williams, guitarist Nir Felder, bassist Burniss Travis, and drummers Emanuel Harrold and Charles Haynes, to name just a few! Along the way, Harrold will also delve into conversation with jazz experts, Ted Panken and Nate Chinen.

“Sometimes folks can’t speak for themselves, so as humbly and as honestly as I can, I try to speak for those people with my music.”

It’s a monumental task, one that calls for tremendous empathy and sensitivity. To give voice to the silenced requires more than just talent and ambition, it requires faith, imagination, strength, and determination. Above all, it requires perspective. Fortunately, that is what Keyon Harrold brings most of all. On his latest album, the innovative, progressive and truly profound The Mugician, Rolling Stone enthused, “Harrold’s pop sensibilities and activist leanings shine through on the album, which is tied together by its catchy melodies – a rarity in critically acclaimed circles of modern jazz”. With one foot firmly planted in jazz and the other in hip-hop and R&B, trumpeter Keyon Harrold has thrived by effortlessly navigating the kindred musical currents.

On Tuesday October 9th, The National Jazz Museum in Harlem, located at 58 West 129th Street, New York, will proudly present Desert Island Discs with Keyon Harrold at 7pm. Admission is free though there is a $10 suggested donation. Hosted by respected jazz journalist Ted Panken, the Desert Island Discs series is an incredibly popular program that is now entering its fifth season. It’s modeled on an iconic BBC radio show, extant since 1942, which invites eminences from various walks of life to choose—and discuss—the eight records they would bring for a stay on the apocryphal desert island. For the Jazz Museum’s expanded version, the presenters are jazz musicians, who will present a cohort of music, of any genre, that was essential in the formation and evolution of their musical personality.

In association with ArtPower, University of California, San Diego, The Loft, located at Lyman Lane, La Jolla, CA is excited to welcome Keyon on Friday, October 12th. Taking to the stage at 8pm, the trumpeter will be joined by Nir Felder on guitar, Brett Williams on keys, Burniss Travis on bass and Emanuel Harrold on drums. ArtPower aims to present performing and media arts that engage, energize, and transform the diverse cultural life of the University and San Diego. Tickets: $9-$30. Available here.

On Saturday, October 13th, Keyon is thrilled to bring this same line-up to SFJazz Center, located at 201 Franklin Street, San Francisco, CA. Keyon will take to stage at The Joe Henderson Lab at 8:30pm. Tickets are $25 and are available here.

On Sunday, October 14th, Earshot Jazz will present Keyon alongside Nir Felder on guitar, Brett Williams on keys, Burniss Travis on bass and Charles Haynes on drums. This esteemed ensemble will take to the stage at The Triple Door, located at 216 Union St, Seattle, WA at 6:00pm. Tickets are $10-$22 and are available here.

Keyon will make his first of two appearances at this year’s BRIC JazzFest on Wednesday, October 17th at BRIC House Ballroom, located at 647 Fulton Street, Brooklyn, NY at 7:00pm. Engaging in an exciting discussion Nate Chinen about his new book Playing Changes: Jazz for the New Century, and the evolution of jazz, the panel will be rounded out by trumpeter Terence Blanchard and vocalist/guitarist Camila Meza. Now in its fourth year, BRIC JazzFest includes film, dance, panel discussions, workshops, and a three-stage, three-night live music marathon that celebrates some of the most exciting global legends in jazz, and groundbreaking new jazz artists from Brooklyn and beyond. RSVP here.

BRIC JazzFest culminates in a three-night marathon with ensembles performing staggered sets in multiple spaces throughout BRIC House and on Friday, October 19th, Keyon will return for night two of the Brooklyn festival. Joined again by Nir Felder on guitar, Brett Williams on keys, Burniss Travis on bass and Charles Haynes on drums, Keyon will take to the BRIC House stage, located at 647 Fulton Street, Brooklyn at 7:30pm. This highly-anticipated night of music will also see performances from Meshell Ndegeocello, Xenia Rubinos, Cyrus Chestnut Trio, The Jazz Passengers, Camila Meza, Michael Sarian & The Chabones and Yasser Tejeda & Palotré. Tickets are $30 and are available here.

Keyon will continue with another New York date on Monday, November 12th at the 9th annual Nublu Jazz Festival. Alongside his classic quintet, Keyon will take to the Nublu stage, located at 151 ave. C, New York at midnight. More info available here.

Check back soon for details on Keyon’s upcoming dates in Israel and South Africa!

MORE ABOUT KEYON HARROLD
Keyon Harrold was born and raised in Ferguson, MO, the St. Louis suburb that tore into America’s national consciousness in 2014 with the police shooting of Michael Brown and the bitter protests and riots that followed. Growing up as one of 16 children in a family that prioritized music and community across generations, Harrold released his solo debut, Introducing Keyon Harrold, in 2009 and then won wide acclaim for his trumpet performances in Don Cheadle’s Miles Davis biopic Miles Ahead. His recent album The Mugician (2017) is a portmanteau of “musician” and “magician, a nod to a nickname Cheadle bestowed upon the young virtuoso, and it’s an apt descriptor for a record that pushes beyond the traditional boundaries of jazz trumpet.