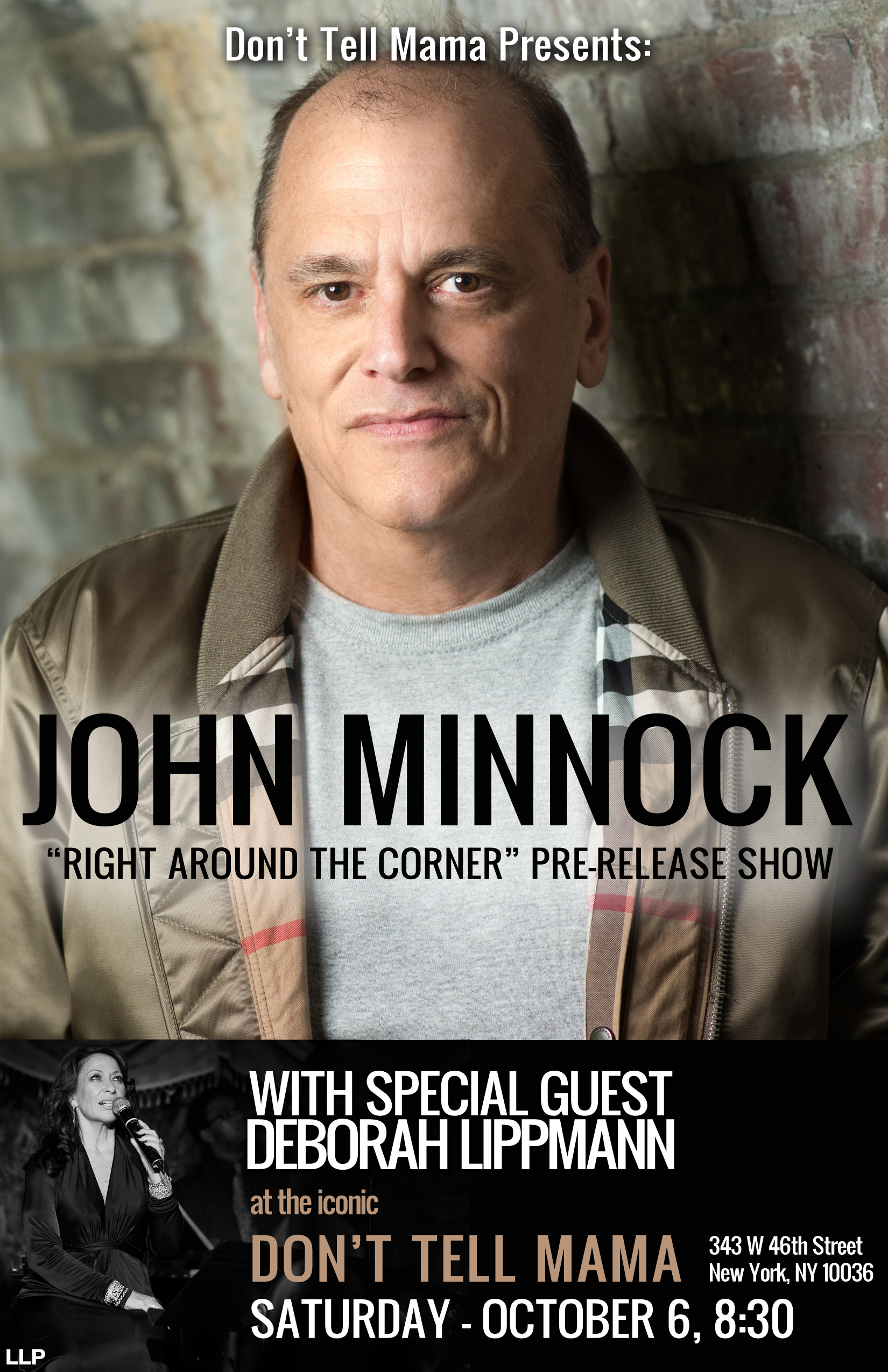 Renowned vocalist John Minnock is thrilled to celebrate the forthcoming release of his new album “Right Around the Corner” at Don’t Tell Mama on Saturday, October 6th at 8:30 PM! For this exciting pre-release show, John will be joined once again by the great Deborah Lippmann, whose last performance at Don’t Tell Mama brought the audience to their feet.

“Right Around the Corner” is John’s second release as a leader. His first album, “Every Day Blues”, introduced John’s signature wit and candor as he explored the American songbook from the perspective as an openly gay man. His long-running show of the same name, presented through the years at the Metropolitan Room, the Triad Theater and, most recently, Don’t Tell Mama, has been an audience favorite, attracting a diverse cast of attendees from inquisitive cabaret fans to serious jazz listeners.

On “Right Around The Corner”, John has upped the ante with impressive new music, including three original compositions plus inventive new renditions of cabaret and jazz classics. Supported by a stellar rhythm section and a special Grammy-nominated guest, John’s new “gay-ahead jazz album” is a groundbreaker as it explores LGBTQ subject-matter in a jazz setting. This special pre-release show at Don’t Tell Mama will give listeners an early peak into John’s new material before it is officially released in November.

Returning for a second time, vocalist Deborah Lippmann will be joining Minnock as a special guest vocalist. While Deborah is known as one of the worlds’ premiere celebrity manicurists, music was, and remains, her first love. A seasoned jazz singer, Deborah has released two albums, “Nightingale” and “Vinyl”, both available on iTunes. She is excited to be Don’t Tell Mama alongside John. More information about Deborah can be found on her website (ww.deborahlippmann.com).

MORE ABOUT JOHN MINNOCK:
John Minnock, through his stellar, energetic performances, has developed himself into an audience favorite who is rapidly building a large New York following. He combines great originality, musicality and showmanship with clever wit and irreverent comedy to present a high-energy and entertaining evening of jazz, blues, funk and R&B. For John, music is a language and, perhaps because of the discrimination and oppression that communities of jazz and blues have also experienced throughout time, he feels that “jazz and blues is the language through which he feels most comfortable”.

Minnock’s core concept for his performances and overall aesthetic as a vocalist, immediately blossomed when he saw Ruth Brown’s live show, which incorporated energy, enthusiasm, and her personal life experiences. Around the same time, Minnock and his friend, Erick Holmberg (who John consults with for many of his musical endeavors) were examining jazz music. Erick drew attention to Duke Ellington’s ‘Don’t Get Around Much Anymore’, which starts with the lyric ‘Missed the Saturday Dance’, and suggested that it would have to apply to a community where there is an expectation of showing up in the same place, at the same time, every Saturday – so it’s either a small town, or if in an urban environment, a sub-culture – such as the African American community or the gay community. The seed was thus planted and it began to grow.

The New York native explains that jazz and blues were, essentially borne of the life experiences of an oppressed and discriminated against group – African Americans. The sound developed in and around New Orleans. Various cultures (beyond African Americans) have contributed their own experience and styles to the art form – and for John as an openly gay man, this same thing occurred in an evolutionary manner.

“I personally understand oppression and have experienced discrimination. I believe this is an underlying reason I gravitate toward the music.”

One aspect that carries particular importance for John during his performances is authenticity. He ensures that he never disrespects the material, or intrudes in an area that isn’t appropriate for his background.

“It’s a new lens through which to look at the genre. And staying faithful to my background, not intruding on a life and experience that isn’t mine, is key to continuing this.”