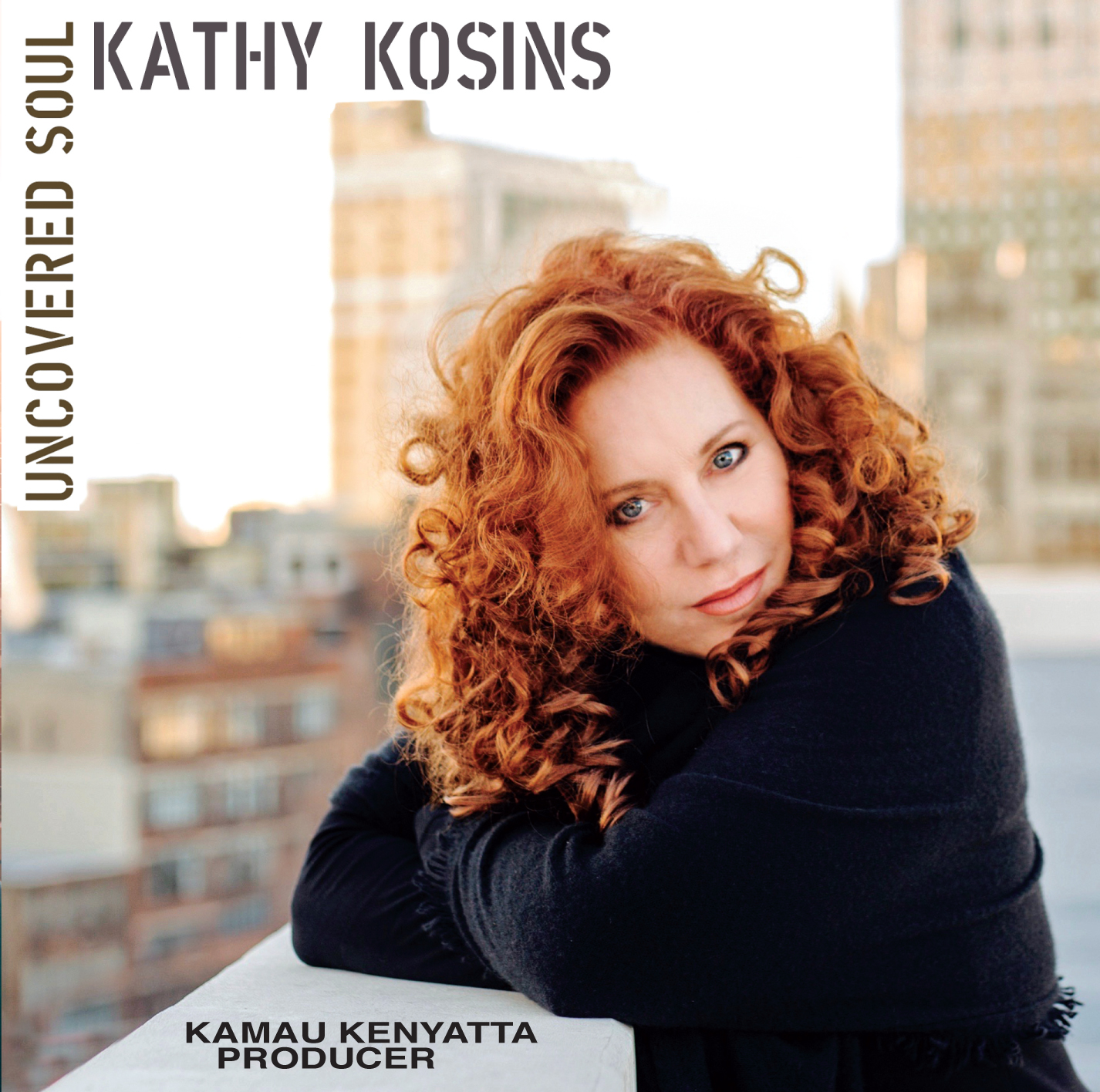 When I find an album that I like as much as this one on my first listen, I have to check myself by listening to it again the next day to make sure I heard what I thought I heard. As I played it again on day two I was thinking how much I loved the record, then I noticed something that I had somehow missed the first time around. It was a gorgeous cover of the Blue Nile’s “The Downtown Lights”. This completely knocked it out of the park for me.

Kathy Kosins’ Uncovered Soul gets better upon repeat play. Although Kosins’ has somehow eluded me until now, she has had quite an accomplished career. She distinguished herself as a writer, arranger, and session vocalist and she sang with Was, Not Was both in the studio and on the road. All this before morphing into a jazz artist with a string of albums that began in 1996 with All In A Dreams Work.

Uncovered Soul, according to Kosins, is very different from her previous five records which were pure jazz. Returning to her soul/R&B roots, this new one consists of ten tracks divided between four originals and seven cover songs. She co-wrote three of them with Jeff Franzel, two of those also included Thomas Kimmel (see below). The fourth original is actually a combination of a seventh cover song, “Dreamin'” by Amos Lee and “Dreamin’s Gonna Pull Me Through”, which is Kosins’ fourth original. The other covers come from Gene McDaniels, The Neville Brothers, Curtis Mayfield, The Blue Nile (Paul Buchanan), Bill Withers (Denise Nicholas) and Chuck Jackson (Bacharach, Hilliard). One of the things that really grabs me about this record is that the covers are all superb choices, and with a couple of exceptions, it’s hard to distinguish between the originals and the covers. One of those exceptions, “The Downtown Lights”, may be the best combination of singer and cover song since James Taylor sang “Handy Man” all those years ago.

The second thing that knocks me out about Uncovered Soul is the quality of Kosins’ voice and the jazzy soulfulness with which she sings. The third thing about the album, and this is huge, is the fantastic production by Kamau Kenyatta. The record just sounds amazing with plenty of space for the music to breathe. I love the combination of either piano or electric piano with the organ. The guitar sounds as soulful as it gets. Rhythm is solid with a deep bass and the drummer nicely keeps time without ever getting in the way. At times you can hear a delicate tap of drumstick to cymbal; impressive restraint. To marvel at the degree to which Kosins and Kenyatta were in synch making the album, watch the EPK below.

I also love the piano on this record, it’s well played by Kenyatta, well recorded, and it imparts a very jazzy flavor to the proceedings. Instruments such as trumpet, guitar, and organ are used judiciously, to best effect.

The bonus tracks are two version of the single “Could You Be Me”, first in English and then in Portuguese; both are the original 45 rpm masters. With a different producer (Paul Randolph), these tracks are decidedly uptempo with more instrumentation and background vocals. It might seem like your player went on to another album, that’s how different these tracks sound compared to the rest of the record. The song is an original written by Kosins and Randolph, and it’s one more reason to love Uncovered Soul

Kosins’ combination of jazz and soul has me looking for comparisons. Several, such as Candace Bellamy, Denise King, and Julia Fordham, come to mind, but the one I keep returning to (perhaps because they just released their first album in ten years) is Swing Out Sister. It’s not that their particular combination of jazz and soul sounds like Kosins’, it doesn’t, but they hit many of the same sweet spots for me. Every time I check out new releases, I hope to find an album like Kathy Kosins’ Uncovered Soul.

Kosins talked about the genesis of the album and how she came to work with Kamau Kenyatta in an interview contained in an article by Pete Lewis of Blues and Soul Magazine.
“…while it was taking me about a year to hone in on song choices I happened to run into this lady-friend of mine – a really good bass-player who works with a lotta the groups in Detroit – and I was like ‘There’s this artist that I’m crazy about called Gregory Porter and I believe one of his producers Kamau Kenyatta used to live in Detroit – do you know how to get in touch with him?’. To which she was like ‘His mother’s my Godmother and he’s currently living in San Diego teaching jazz piano at the university’! You know, by this time Kamau had already won a Grammy for his work on Gregory’s “Liquid Spirit”. So I contacted him and, with his mother still living in Detroit, when he visited her at Christmas-time he came to my house, we sat down, we started talking, I told him my whole idea for the record and how, if I’m not writing my own material, I like to find really obscure, beautifully-written songs and then re-imagine them and re-construct them… And so because he liked my ideas he came on board and basically that’s what we DID! Like for example with the Burt Bacharach tune “Any Day Now” – which was written for Chuck Jackson in the early-Sixties – we completely de-constructed it so that it changed from being an upbeat pop record to a heartbreaking ballad. Then we worked on other songs like Paul Buchanan’s “The Downtown Lights”, Curtis Mayfield’s “Miss Martha”, the Bill Withers tune “Can We Pretend”, Amos Lee’s “Dreamin’” – after which I went to New York, where I collaborated with a couple of guys I write with out there. Which resulted in us coming up with new songs like “A To B”, Uncovered Soul”, “If Love Could Talk”… So yeah, in a nutshell that’s how Kamau came on board and how the record came together and ended up the way it did.”
Read the complete article and interview @bluesandsoul.com