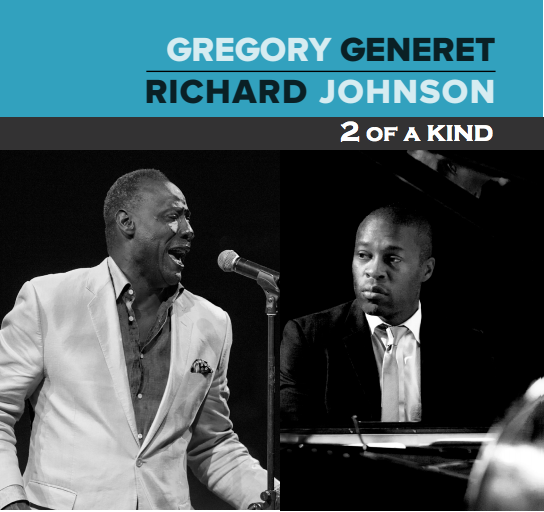 Vocalist Gregory Generet and pianist Richard Johnson are proud to release their debut collaborative album, 2 Of A Kind TODAY! Featuring some of New York City’s finest musicians including Freddie Hendrix on trumpet, Jonathan Beshay on tenor and soprano saxophone,  Barry Stephenson on bass and Henry Conerway on drums, 2 Of A Kind is filled with traditional classic swing, reminiscent of John Coltrane and Johnny Hartman’s collaborations. 2 Of A Kind acknowledges the great legends of jazz, while maintaining focus on future horizons and perspectives. Collectively, this talented duo create a sound that leaves audiences captivated and wanting more.

2 Of A Kind is a twelve track compilation of six reimagined classic gems and six original compositions written and arranged by Richard Johnson. With Johnson’s dynamic writing perfectly showcased and brought to life by Generet’s vocals, 2 Of A Kind presents the listener with a fresh, optimistic perspective for the future of this music. With the original composition “We Can Make a Change” particularly in mind, 2 Of A Kind is a feel good record that strives to present a positive outlook when plans and expectations take an alternative route.

Gregory Generet has been performing internationally to sold-out appearances and now it’s time to bring the swing home. Alongside maintaining a three year residency at Smoke Jazz Club, the talented vocalist has earned the respect of the New York jazz scene by performing at Dizzy’s Club Coca Cola and Rose Hall (Jazz at Lincoln Center), Joe’s Pub, The Highline Ballroom, The Kitano and Feinstein’s at the Lowes Regency. Nominated by New York City’s Hot House jazz magazine as Best Jazz Vocalist and a three time Emmy winner, Generet began working with Johnson at Jazz at Lincoln Centre Doha (Qatar) where they quickly became a household collaboration in the Middle East.  Having spent close to three years working overseas, Generet and Johnson developed a huge repertoire of music that is now coming to light in the United States. Making it to the final four on internationally renowned TV show “Chopped”, Generet is also known to be a talented cook, alongside his successful music career!

Born in Pittsburgh, the home of jazz greats Art Blakey, Ray Brown, Jeff “Tain” Watts and Ahmad Jamal, Richard D. Johnson has strong territorial jazz roots. Schooled by some of the most legendary jazz musicians and studying at some of the most esteemed institutions of music, the pianist and arranger has cultivated a rich and pedigreed musical background. Following his tenured musical education, Johnson was invited to become a member of Wynton Marsalis’ Septet and the Lincoln Center Jazz Orchestra. After completing his time with JALC (2000-2003), Richard became the musical director for the National Basketball Association in Atlanta, GA and presented an impressive 92 season games.  During this same period he also had the privilege of being named United States Jazz Ambassador 6 separate times. Mentored by Ron Carter, Wayne Shorter and Herbie Hancock, Johnson explains that these three icons paved the way for his innovative approach to music to be formed and moulded. Johnson actively honors the greats of the past, absorbs their legacy, and then creates and presents music that maintains a strong, positive outlook to the future.