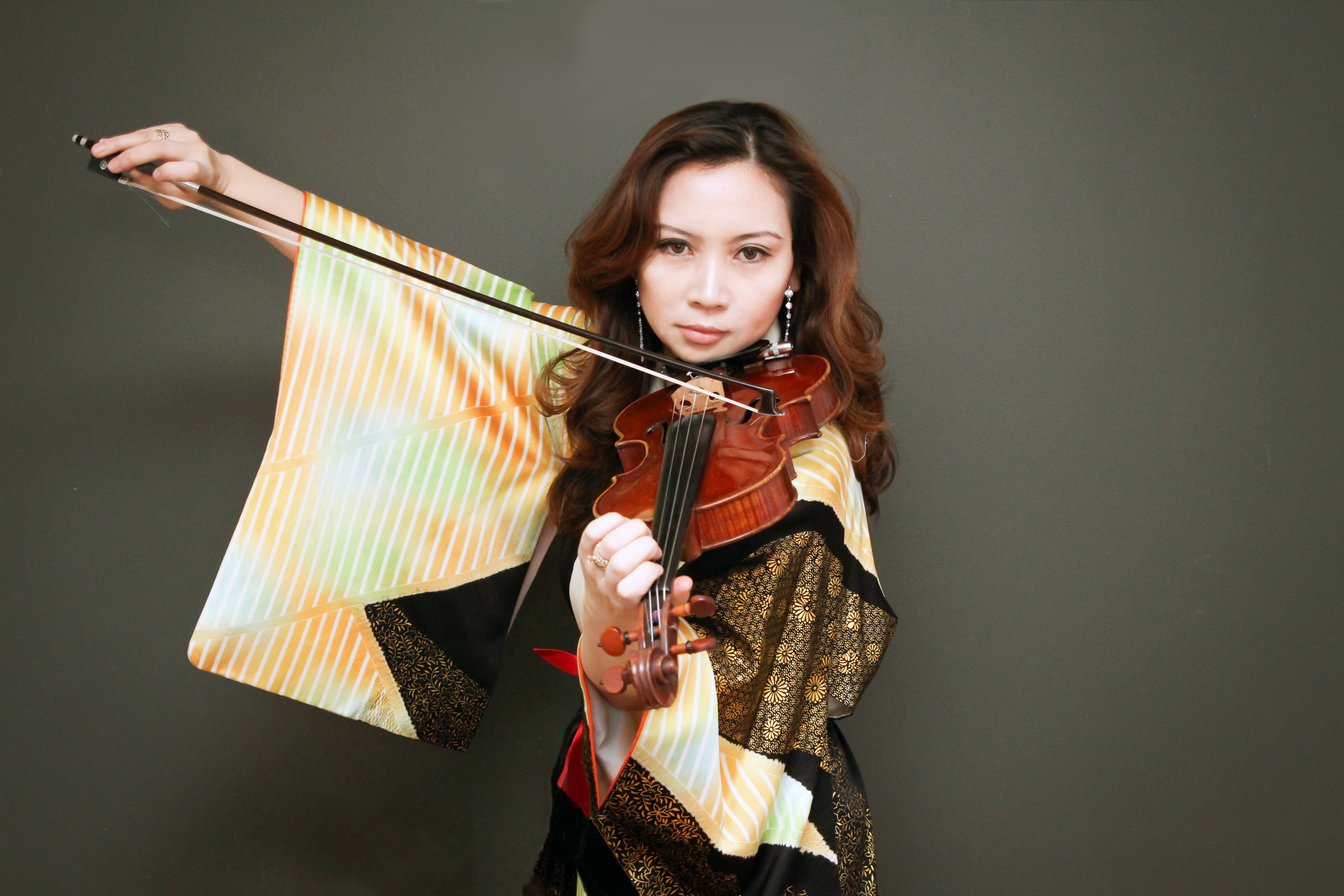 Tokyo native Meg Okura defies convention. While forging a prolific career in music since graduating from Juilliard in the ’90s (working with the likes of Diana Krall and David Bowie to name a few), this Grammy-nominated jazz violinist continues reaching out to new audiences through her “world chamber jazz” that could mean anything from performing the erhu with her Pan Asian Chamber Jazz Ensemble or big band music from Japanese and Jewish composers.

As part of the NPO Trio, Okura recently released Live at the Stone, a collaboration with husband Sam Newsome(soprano saxophone) and Jean-Michel Pilc (piano) that creates a unique sound with hints of familiar melodies including well-known Yiddish songs and even excerpts of John Coltrane. Arriving May 13 is IMA IMA, Okura’s latest studio effort. A reflection on motherhood featuring the Pan Asian Chamber Jazz Ensemble and trumpeter Tom Harrell, this new material will be showcased in an intimate live performance at Dizzy’s Club Coca-Cola in New York on Aug. 20.

In this exclusive interview, Okura discusses her inspirations and also tackles taboo topics like whether the music industry needs its own #MeToo movement and the difficulty of making a living as a musical artist in the age of the internet.

You are known for your eclectic music, getting inspiration from jazz, pop, and all the way to 19th century Yiddish music. Is that a concerted effort to avoid being typecast in any particular genre?

I create music that is true to myself. Different types of music reveal themselves to me whether it sounds like Ose Shalom, J.S. Bach, Piazzolla, Coltrane or even YMO. I just welcome what comes to me. But don’t get me wrong, I am a firm proponent of straight-ahead jazz. I am a jazz musician first and foremost, but I also used to perform Brahms and Ravel, and have toured with Michael Brecker as well as many Jewish bands. So I just stay true to myself and try to accept my whole history and different life experiences.

Has being born and raised in Japan influenced your musical style? Why learn the erhu and not the shamisen, for instance?

Japanese people are open and unafraid of owning music from other cultures. For example, I am very unapologetic about learning the erhu, jazz, and Judaism—things that obviously belong to races, cultures, and traditions different from my own. It’s a uniquely Japanese thing to embrace arts from other cultures and perform them at a high level.

What got you hooked on Yiddish music, and did your husband have any influence on that?

Do you know that I have a big band called J-Orchestra? We play music by Jewish and Japanese composers including works by yours truly, who is both Jewish and Japanese. Not only am I a Jew but I have also studied German and Hebrew, so I always felt connected to the Yiddish melodies—minor melodies with major chords. I always cry every time I play “Oyfn Pripetchik.” My husband, Sam Newsome, on the other hand, is not Jewish. So he is not familiar with these melodies at all, and it works out beautifully keeping our music making fresh and unique.

Can you explain to us the genesis of NPO Trio? Is this going to be a long-term partnership or are you going to improvise just like the music the group is putting out?

The “Happy Birthday” song is what got us started. Three of us began to jam on it at our daughter’s third birthday party. It was nothing like the “Happy Birthday” song you would typically hear at parties. This led to us playing other non-jazz tunes, one after the other, including Yiddish songs. We just couldn’t put our instruments down. So that’s how it all started. Yes, we will continue to play as a trio when possible, and it will always be very open musically, but perhaps with more concrete thematic materials.

You have performed with many well-known artists in the music world including Herbie Hancock, Diana Krall and David Bowie. Any personal favorites? Can you share any stories?

Musically, Herbie Hancock has influenced me the most—I used to transcribe his solos and practice them on the piano. He is my hero. As a woman and a leader, I admired Diana Krall: She carries herself with remarkable ease and grace in this male-dominant field of jazz. She is a boss, but not a diva. And personally, I am forever indebted to David Bowie because he is responsible for my being in America. He wrote the recommendation letter to the U.S. immigration office for my green card, stating that I was “the best” and he needed me in America.

Who do you think are the best Jazz musicians out there today?

I admire many of my colleagues with whom I have worked: Jason Lindner, John Ellis, Helen Sung, JMP, and Kevin Hays, just to name a few.

You graduated from Juilliard two decades ago. What kind of advice would you give to aspiring musicians if you were asked to give a commencement address there today?

Congratulations! You now have a paper that proves that you are an earnest and gifted person. After today, being these things will not be good enough. You will have to create your path without a syllabus or bimonthly quizzes. You will have to produce results. So start training yourself to think critically and form original thoughts. Be creative and resourceful to use what you already have to the fullest. Be grateful for everything. Love those who are closest to you and take care of your immediate environment before worrying about the universe. Work efficiently and enjoy the process of working while pursuing your ultimate goals.

In Tokyo, it sometimes feels like there are thousands of little jazz bars in a country that doesn’t have a long jazz tradition like the United States. Would you be able to explain its enduring popularity in Japan?

Jazz is exceptionally sophisticated and at the same time profoundly emotional and tribal. One must be highly perceptive and intelligent to understand this art form. And at the same time, one must be receptive and curious about other cultures without losing their own cultural values. There are many so-called jazz otakus in Japan and good for them! I have the highest respect for them.

Do you find it a challenge to convince jazz purists that there is room for the musical form to adapt?

Jazz purists play a critical role in preserving the historical aspects of the music. Therefore, my music is irrelevant to them. We’re on two different paths. They’re on a path of re-discovery, I’m on a path of me-discovery. I recently found out that over a thousand non-jazz fans listen to my music on Spotify daily. They probably don’t know that what they are hearing is jazz. So my music is serving a different demographic: I’m introducing jazz to those who don’t listen to jazz.

Regarding the business of music, are you basically content with the way musicians are being compensated for their work on the internet such as downloads and streaming or do you think there needs to be an improvement?

I have close to 200,000 total streams on Spotify. As I have mentioned, these are not jazz fans. Sure, I’d be a millionaire if each of these streamers paid $10 for my CD. But there wouldn’t be 200,000 streams if my music was not offered for free. People pay the value that is worth to them. Today, people pay me by listening to the advertisement on Spotify. Yes, it would be amazing if I could get paid more per stream, but at the moment, I stay positive and just hope to increase the numbers of streams.

The #MeToo and Time’s Up movements have been bringing about changes in the entertainment industry, especially Hollywood. Is the problem of gender discrimination, salary inequality and sexual abuse also prolific in the music industry in general and jazz in particular and if so, what kind of remedies are needed?

The most significant difference between the film and jazz industries is that we no longer have influential gatekeepers in jazz. Record company executives, managers, booking agents, and producers used to be extremely powerful. But today, they no longer make or break one’s career in jazz. It also means each artist has more control over one’s career, thus making all of us behave more responsibly. No jazz musicians have ever abused me. Nobody has ever paid me less for any reason, and my booking agent (who is male) tries to get me the best possible fees.

All men I work with are outstanding, but it doesn’t mean that I have never been sexually harassed or made to feel uncomfortable. Until recently, many jazz musicians used to make inappropriate jokes and offhand comments on and offstage. Today, no colleague of mine even compliments my looks no matter how much I try to look attractive—the #MeToo movement has put a complete stop on that. The best part of this movement is that very few men say “ko-ni-chi-wa” or “ni-hao” to me. Even when that happens, I can now speak back and tell them it is offensive without being lectured back with the usual “you should be proud of your culture” attack. So overall, things are getting much better.

However, the #MeToo movement is not without a downside. When a few women at a jazz “Me Too” meeting started competing who gets the most catcalls and discussing it as though it was the biggest problem in the world today, I was no longer able to share my story of being gang raped at age eight. I have experienced unwanted catcalls too, but they don’t even compare with the pain and suffering I have endured, and I could no longer genuinely relate to the movement. Not me (too). Another downside is the fact that a few women I know have falsely accused men of rape, and I also know people whose family member has been falsely accused. And these are regular people, both the accusers and the accused. They are just like the people you and I know. When this happens to you, the whole family suffers including your wife, mother, and daughters. We must always strive to reduce the suffering of all people, men, and women, regardless what is considered a favorite position to take today.