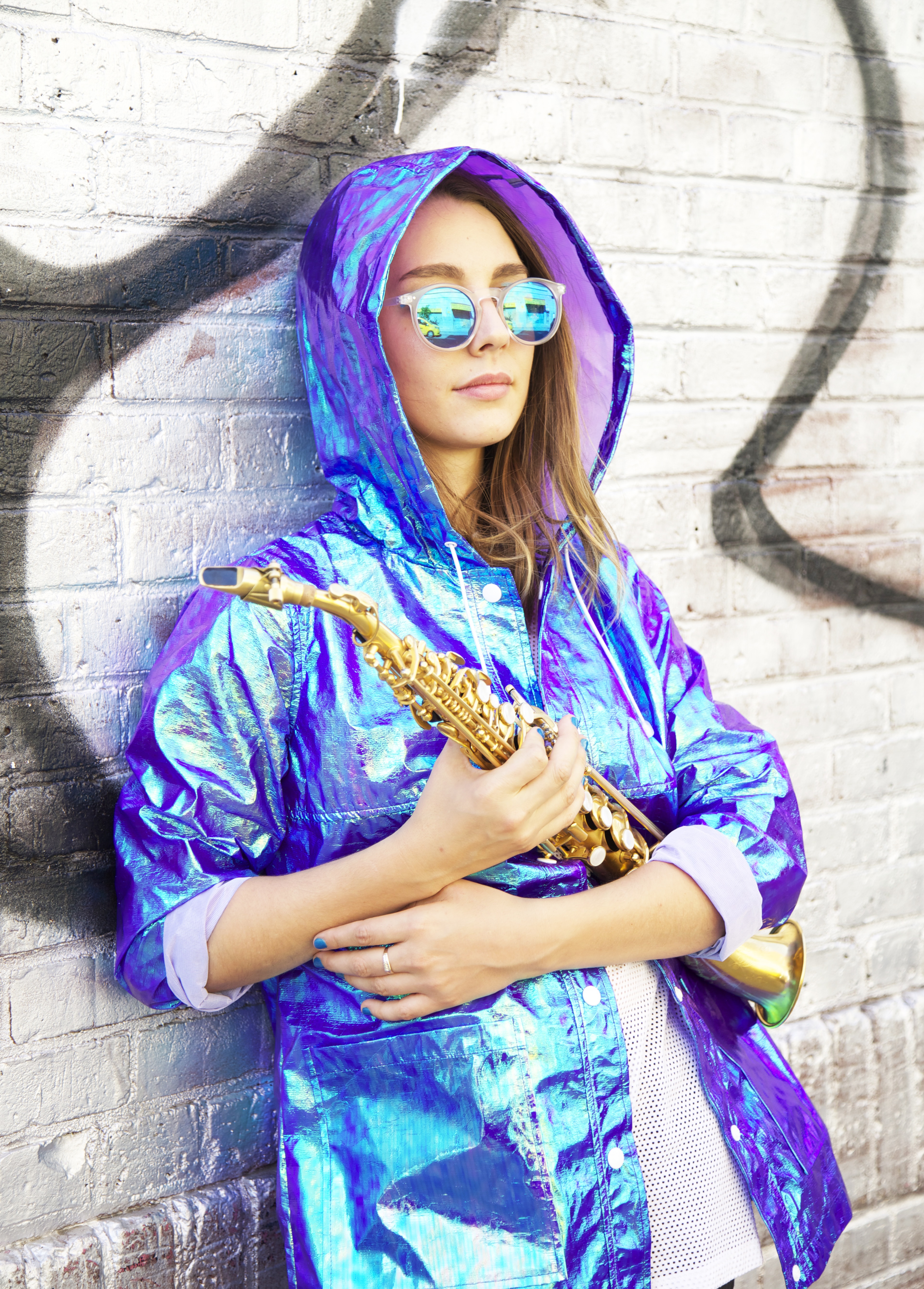 There is a new energy awakening among a select few jazz musicians, whether explicit as in Marquis Hill’s latest EP Meditation Tape or implicit as in the album covers to Kamasi Washington’s The Epic and Dr. Lonnie Smith’s All In My Mind. Add to the ranks of this enlightened jazz elite, if we shall be so bold as to coin the term, the young stalwart saxophonist Hailey Niswanger and her latest incarnation MAE.SUN which released its debut Vol. 1: Inter-be last November. Undoubtedly one of our most pleasant revelations in recent memory, Vol. 1: Inter-be is a pure joy to listen to from beginning to end and an enlightening and transformative journey by way of musical discourse. This album is simply a must. Plus you have no excuses while it’s streaming free of charge on Bandcamp We caught up with Niswanger to discuss the project in further details.

Sebastien Helary: You’ve been making a name for yourself over the last few years. You’ve released 3 albums as a leader; were featured in the Wall Street Journal and on NPR, were listed in the Downbeat Magazine critics poll in the rising star category for alto and soprano saxophone, and you’ve performed with Esperanza Spalding and Terri Lyne Carrington, just to name a few. Yet you say of your latest project, MAE.SUN’s Vol. 1 Inter-be, that: “this is the most honest and real [you] have ever felt with [your] music.” How do you explain this musical awakening and this inspired departure from 2015’s funky PDX Soul?

Hailey Niswanger: I feel that MAE.SUN is the most honest and real I have ever felt with my music because I am writing from a place that is totally free and open. I’m not trying to fit into any particular genre, or trying to mimic a musical master, when composing as MAE.SUN I completely let go of concepts, and the music just is. I like writing and playing this way, and I finally feel like in doing so, I am creating my own original sound, my own voice. MAE.SUN is a culmination of many inspirations and influences, and going deeper than the musical notes, it’s a platform to feel, reflect, and meditate on the interdependent nature of reality.

SH: You say Vol. 1: Inter-be takes cues from Buddhist monk and peace activist Thich Nhat Hanh. What were some of your influences, musical or otherwise, for this album? What are some of the things you were listening to, or reading, during its conception? What inspired your creative process?

HN: Thich Nhat Hanh has been a huge influence in my life, and I discovered him during the time that MAE.SUN was forming. This therefore had a huge impact on my music as well, and gave everything in my life a deeper meaning. “Peace Is Every Step” was the first of his books I read, and have reread many times over, (it’s even tattooed on my foot, that’s how life changing his teachings have been for me.) Other musical influences include Alice and John Coltrane, Weather Report, George Duke, Hiatus Kaiyote, and Erykah Badu. My creative process also pulls from my own life experiences, feelings I have felt, the rhythm of words, and the sounds of nature.

SH: You call this album a “meditative journey”. Can you elaborate? What can your listeners hope to gain from this journey? What is your purpose with Vol. 1: Inter-be?

HN: Vol. 1: Inter-be was written as a suite of music, it is meant to be performed and listened to in one setting. The music has a story line written, but it also incorporates a lot of improvisation, therefor the story, or journey, changes every time it’s performed. I enter the music from a meditative state, completely open to letting the music flow through me while being reactionary to the other members in the band, the audience, and the emotions I’m feeling, but ultimately my state of mind while playing as MAE.SUN is one of universal harmony. This music is about our connection to all life, here on this planet and beyond. This is my focus of meditation through the music, and my hope is to have the listeners join us on the journey, and contribute their vibrations to making a more consciously connected world.

SH: Your band is comprised of Nikara Warren on vibraphone, Andrew Renfroe on guitar, Axel Laugart on keys, Aaron Liao on bass, and David Frazier Jr. on drums. Can you tell us more about your acolytes? How did you all come together for this project?

HN: Aaron Liao (bass) grew up in Seattle WA, he and I became friends at Berklee College of Music in 2010. Aaron is part of alternative experimental pop group Iris Lune and collaborates with many artists including Jaime Woods, Ben Talmi, and Raveena Aurora. Nikara Warren (vibraphone) attended Berklee as well, but our paths didn’t cross until after we both graduated, about a month after I moved to Brooklyn in 2012. Since that day we’ve remained close friends and musical partners. Nikara was born and raised in Brooklyn and is the granddaughter of pianist Kenny Barron. Nikara also leads her own group, Black Wall Street, and will be releasing an album later this year. Andrew, Axel, and David, I all met through mutual connections here in NYC. Andrew Renfroe (guitar) is from Jupiter Florida and studied at The Jackie McLean Institute of Jazz in Hartford, CT, and Julliard. He has performed in the bands of Steve Davis, Nat Reeves, Terrace Martin, Carmen Lundy, Ned Goold, and Braxton Cook. Axel Laugart (keys) is from Cuba, and leads his own group, is a part of the band (U)nity, and has performed/collaborated with many artists including Afro Cuban All Stars, Teresa Garcia Caturla, and Little Louie Vega. David Frazier Jr. is from Brooklyn, was the drummer for SZA’s CTRL tour, and has performed with Gabriel Garzon-Montano.

SH: What you have planned for us with ‘Vol. 2’? When can we expect the follow-up?

HN: Vol. 2 will be recorded this Spring, and will likely come out near the end of this year. This Volume is titled Release, and carries the theme of “let go and go”. We will be performing Vol. 2 on March 24th at National Sawdust as part of The Revolution 2nd Anniversary show.

SH: As a nod to Pannonica, if you had three wishes, what would they be?

HN:
My first wish would be for the awakening of a higher consciousness in our society, that unites us all in the understanding that we are all one, and therefor should treat everyone and our planet with respect.
My second wish would be to perform with MAE.SUN in beautiful places all over the world, such as national parks, botanical gardens, tropical rainforests, and in caves, for millions of people.
My third wish would be to have the ability to teleport.