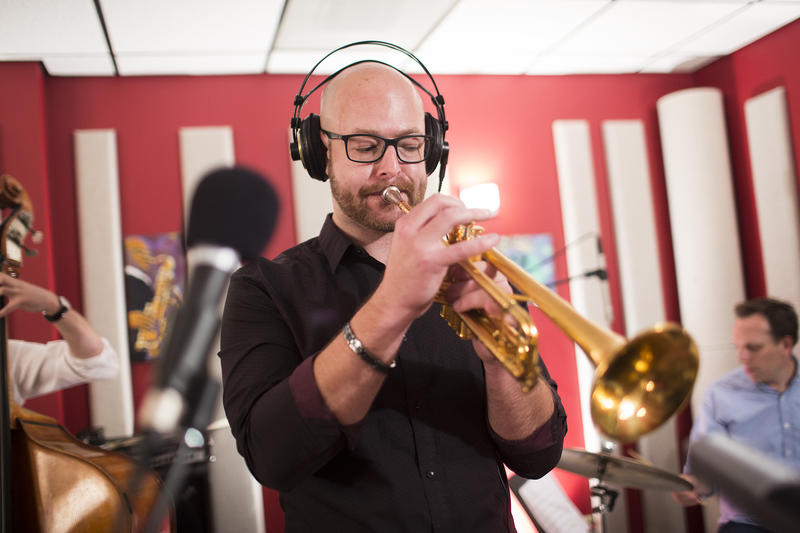 Trumpet player, composer and jazz educator Jared Hall grew up in Spokane, Wash. His jazz studies took him to Whitworth University in his hometown, then to Indiana and Florida. But Hall has recently returned to the northwest, adding another potent voice on trumpet to the growing Seattle jazz scene.

Jared Hall has performed live on KNKX before, as mentor with the Juanita High School jazz ensemble. His educational bona fides are no joke, Hall earned a Doctorate of Musical Arts from the University of Miami. He’s currently teaching jazz at Seattle Academy of Arts & Science, as well as the Jazz Night School in Seattle.

For this exclusive live performance, we were happy to leave the students behind and let Hall’s own trumpet and compositions shine. His debut release, Hallways, was released earlier this year. It’s packed with stellar songs and performances with his friends in Florida, where the album was recorded.

Back in his new surroundings, Hall collected an impressive backing trio of Seattle-area jazz stars, including John Hansen on piano and Matt Jorgensen at the drums. Though still in high school, bass player Ben Feldman is growing into a popular choice for bands in need of quality chops in the rhythm section, and surely Jared Hall is no stranger to working with teens.

Our studio audience was treated to three sweet tunes from Hallways, and when you’ve enjoyed this session, you’ll surely want to collect the rest of Jared Hall’s lyrical compositions found therein.