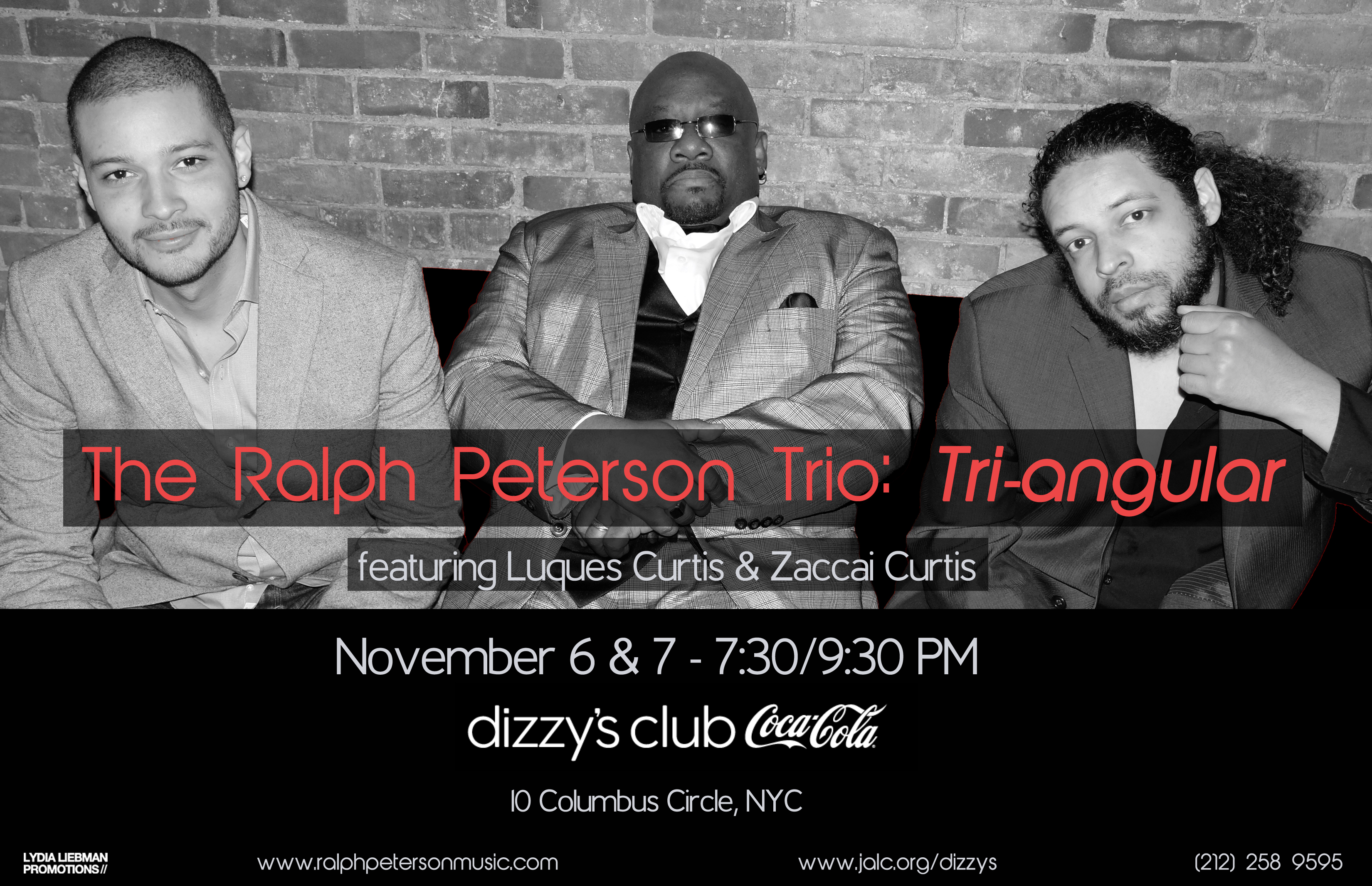 The Ralph Peterson Trio, featuring The Curtis Brothers To Perform At Dizzy’s Club Coca-Cola at Jazz at Lincoln Center

Dizzy’s Club Coca-Cola, located at Jazz at Lincoln Center at 10 Columbus Circle, New York is excited to welcome Ralph Peterson, alongside his trio made up of the exceptional Curtis Brothers: bassist Luques and pianist Zaccai. They will perform for two nights, kicking off on Monday, November 6th and continuing through Tuesday, November 7th. This powerhouse trio, collectively known as Tri-angular will take to the stage for two sets on both nights at 7:30pm and 9:30pm. Just last year, Peterson debuted the latest album and the third in his acclaimed Tri-Angular series alongside Luques and Zaccai Curtis. The Curtis Brothers have made an impressive mark in jazz and Latin music by exploring the blues harmonies and swing rhythms of the African-Caribbean-New Orleans lineage that make for a distinct and irresistible fusion, and their versatility has made them first-call sidemen in a variety of settings. Under Peterson’s experienced leadership, it will be an exciting collaboration well worth checking out at Dizzy’s. Tickets range from $20-$35. Reserve tickets by calling 212-258-9595. Here is a video sample from the concert of the recording:

Drummer and composer, Peterson released “TriAngular III” on April 8 via his own Onyx Music label and Zaccai Curtis’ Truth Revolution Records. The album is the third installment in Peterson’s “Live at Firehouse 12” series. Most importantly, the album is a celebration of Peterson’s victory in his battle against cancer. Putting the album on hold was not an option according to Peterson who said, “Early on I thought that if this is my time, I’ve got to get this music finished and out because I’m real comfortable with this being my swan song. If it’s not, I still wanted to get it out because I’m really excited about this music that we put together.”

Peterson, who just celebrated a landmark 21 years drink and drug free, was excited to be performing with a trio format again. “I love the trio format,” said Peterson. “I think it’s one of the purest vehicles for expressing jazz. I love piano music. My father loved piano music. He met my mother when he was playing piano”.

“I met Luques Curtis when he was a student at Berklee. I had a student ensemble and needed a bass player. He came to a rehearsal and he was great. I told him — you’re at a level way above this ensemble. He said — I want to do it because I just want to play with you. His attitude really impressed me”.

“Later, he said — you’ve got to meet my brother Zaccai. When I heard Zaccai, I was really impressed with his playing. ‘The Duality Perspective’ album, which I recorded in 2012, featured Luques and Zaccai. We’ve been playing together for 12 years. I’m like a mentor. My decision to do a trio album with them happened a long time ago.”

The album received mass critical acclaim and further solidified Peterson’s status as one of the most important musical mentors of this generation. Peterson and the Curtis brothers are thrilled to bring their high-energy performance to Dizzy’s Club Coca-Cola.