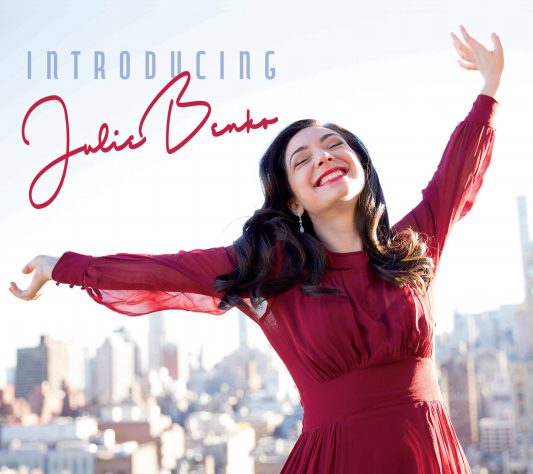 There is a Dixieland-feel to this songbird’s production on the very first cut of her debut CD. Titled, “Tomorrow is a Day For You.” It’s a joyful composition penned by Benko and she explains in the liner notes that she wrote it as a celebration following the US Supreme Court decisions defending same-sex marriage. She has penned three songs on this project and all relate to her response to the world around her.

“Matchmaker, Matchmaker,” from the Broadway production, seems to mirror this vocalist’s sensibilities and style. Obviously, Julie Benko has ‘pipes’; a slang for very strong vocals. She sings with power and gusto. I recognized immediately that she has a stage voice ready to soar onto Broadway stages. When I later read her bio, I discovered I was right. She recently performed on Broadway in ‘Fiddler on the Roof.’

I enjoyed the Jason Anick violin solo on “Love For Sale”. The Jason Yeager arrangement is lovely, presenting the old standard as a tango. This vocalist executes the song well, but I don’t believe her when she interprets the lyrics. This is important, because part of the singers duty is to sell her musical stories to the listening public. Still, Ms. Benko has chosen a number of other recognizable and popular songs to interpret and for the most part, she is very successful. Ms. Benko has co-produced this album with her pianist, Jason Yeager and I would distinguish her as a musical theater vocalist with pop overtones.