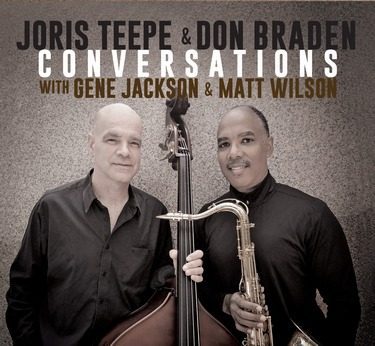 Veteran saxophone/bass duo, Don Braden and Joris Teepe proudly announce the May 30th release of their highly anticipated album Conversations. A follow-up to their co-led album Pay As You Earn, this new project continues the almost quarter-century of collaborations between these two titans of jazz. With the help of esteemed drummers Gene Jackson and Matt Wilson, Braden and Teepe deliver  creative, grooving performances of jazz classics and originals, which incorporate uniquely interactive improvisation.

Having met back in 1992 at a session in New York City, Braden and Teepe immediately recognized their affinity for each other both as musicians and individuals, as Teepe recalls: “We quickly recognized the compatibility of our personalities and attitudes, as well as our musical tastes and goals.”

Conversations, most of which was recorded during the Spring of 2016, highlights the interactive aspects of how Don and Joris play jazz as a duo. As Braden himself notes: “Framed by rich and varied tunes, strong and supple grooves, and emotional expression, the improvisations are really a manifestation of exuberant adventure for us. We create, exchange, explore and develop all kinds of ideas – melodically, harmonically, rhythmically, dynamically and more, and we really have fun while doing so.”

Conversations is further strengthened by the fervent relationship that the duo has developed with both drummers, Gene Jackson and Matt Wilson. With influence drawn from jazz masters such as Sonny Rollins and Elvin Jones, Braden explains that he and Joris enjoy performing as part of a chordless trio, as it allows them to focus on the interactive aspects of their music. This trio format, which is often referred to as “The Trio of Liberty” serves as an ideal environment for each individual musician to display their impeccable participation in musical discourse with each other. While Gene arranged Elvin Jones’ “Three Card Molly”, Matt brought his own original composition, “Stolen Time” to the table. At any given time, on any given tune, there are just two or three musicians performing, which, as Don explains,  “allows that much more opportunity for clarity of communication”.

Following their initial encounter and subsequent tours across Europe, Braden and Teepe released their first CD as co-leaders, on the German label, Mons Records, entitled Pay As You Earn, which featured Tom Harrell, Cyrus Chestnut and Carl Allen. Subsequently, Braden and Teepe continued to join forces on many more productive projects which included CD’s, tours, jazz education, and compositions for various ensembles, including full symphonic orchestras. Now, more than two decades later, they continue to perform and compose with each other as prosperously as ever.

Individually, both artists have had the opportunity to add a list of musical success and experience to their respective resumés, as both have toured with and learned from many legendary jazz masters. Don has worked with Betty Carter, Wynton Marsalis, Freddie Hubbard, Tony Williams, Tom Harrell, Roy Haynes and many others. He has produced 19 CD previous CD as a leader, and has been very active as a jazz educator all over the world, including a three year stint at Harvard University, his alma mater. Joris spent 9 years in Rashied Ali’s group, and also toured and recorded with Billy Hart, Benny Golson, Sonny Fortune and many more. Besides touring, producing and arranging on a regular basis, he is currently the chairman of the Jazz Department at the Prins Claus Conservatoire in Groningen, Holland (where Don also works). He has 14 previous CDs as leader.

However, amidst his successful career, in 2014, Braden developed an unfortunate and tragic ailment, which almost forced him to terminate his career as a saxophonist. During a routine facial massage, a hard lump was discovered along his jawline, which turned out to be a potentially malignant tumor. After a challenging time – a biopsy, a three-hour surgery (brilliantly executed so as not to permanently damage the nerves necessary for playing sax and flute), two months off for healing, and a lot of soul searching, Braden was fortunately able to gradually return to the jazz scene in December of that same year.

As difficult and traumatic as the experience was, Braden saw this turn of events as an opportunity to analyze and reevaluate his life choices and direction. Having galvanized his basic belief that being an excellent person helps you become an excellent artist, he significantly improved his own health and fitness, and continually strives to maximize positive life energy. He is now also starting to actively promote healthy living to his students and colleagues, and is even working on an article for Downbeat magazine. Conversations is Don’s first recording since these events, so it also represents his joy for life, and his gratitude for the privilege of expressing and sharing jazz music.

The duo are already set for their next collaboration, as Joris will be included on Don’s subsequent album Earth, Wind and Wonder. It is due for release in Fall 2017.